We’ll be updating this page regularly with the latest from today’s meeting of Lancashire County Council’s development control committee in the council chamber at County Hall in Preston.

The meeting is considering Cuadrilla’s application to drill, frack and test up to four wells at Roseacre Wood. But it began with discussion on legal advice on the application, considered yesterday and on Tuesday, for Preston New Road.

Application for monitoring array is approved. Vote is 9 in favour, 4 against and 1 abstention

Meeting moves on to discuss related application for a monitoring array

Cllr Marcus Johnstone says the acces is unacceptable the application should be turned down.

Cllr Michael Green says it has nothing to do with fracking, it would be the same for any application involving HGVs on country lanes

Final speaker in support of the application, Steven Pye,,urges people to trust the shale gas industry, which has some of the best educated experts in the world.He says the impact of the application affected a tiny number of people. 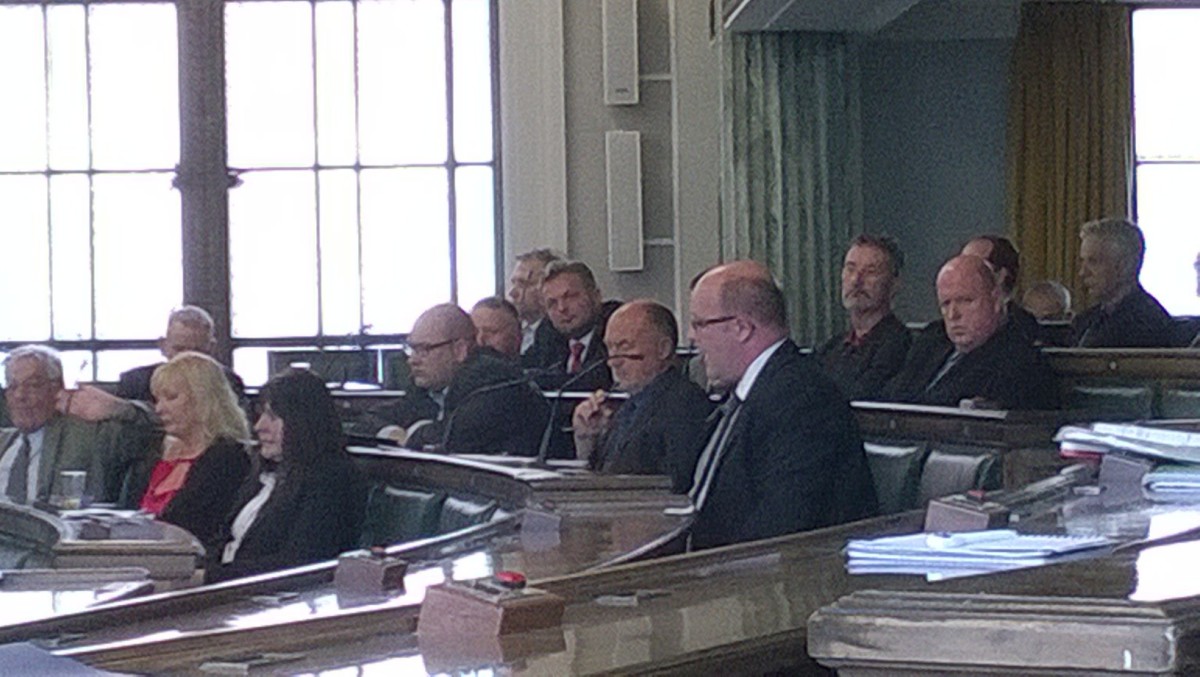 Clare Smith, of Stay Blackpool,says people who speak out in favour of fracking are bullied both face-to-face and online.

Frank McLaughlin says he is considering action against claims that all supporters of the application have something to gain.

Councillors return and meeting resumes. More presentations from opponents of the application. Speakers object on the grounds of noise, lighting, traffic, and failure of the application to comply with planning policy.

John Hodson, a West Lancashire Borough Councillor, says committee members should not be put under pressure by officers about possible costs in an appeal because this was not a material planning consideration.

James Walsh asks where is the evidence that fracking would not have an impact on tourism or agriculture.

Heather Speake, a Fylde Borough Councillor for the area including Roseacre Wood, says lives have been overshadowed by the application for many months.

To applause Teenager Lucy Cookson, who was born in Treales, tells councillors “Your decision affects me and my generation”.

Meeting breaks for lunch. Back at 1.30pm

4 minute presentations by people opposed to the Roseacre Wood Appliication

Gayzar Frackman warns of the risks of increased radiation from fracking

Dr Luisa Sanz, a mental health specialist, says stress, anxiety and sleep disturbance is already a problem caused by the prospect of fracking in the Fylde. She says Lancashire County Council has a responsibility to protect the health of residents.

Roy Harrison says Cuadrilla has failed to tackle the problem of impulsive and tonal noise from the site, which would affect the well-being of residents

James Beaumont says the HGV traffic that would be generated by the application means it does not comply with local planning policy DM2 or the National Planning Policy Framework.

Anne Broughton speaks for Rebecca Crow who is a cancer patient. She says: “Nowhere in the Fylde could be less suitable”

Planning officer Stuart Perigo, recommends refusal of Roseacre Wood fracking application because its impact on highway safety and other road users is contrary to policy DM2 of the Lancashire Minerals and Waste Local Plan.

Planning officer, Stuart Perigo, tells the meeting that traffic generated by the site would have an unreasonable impact on existing road users, particularly vulnerable ones. Noise levels could be controlled and would not be a strong enough reason for refusal.”It is concluded there is little if any opportunity for fracking fluid to migrate to pollute ground water at the depth proposed”, Mr Perigo says. Refusal on these grounds would be unsustainable, he says. Emissions and particulates from the site are unacceptable, as is visual impact of the site, he adds

Lancashire County Council Planning officer, Stuart Perigo, says because Roseacre Wood is a temporary application (six years) it will not result in an unacceptable loss of agricultural land or have a negative impact on tourism. It would be unreasonable to consider the application on what may or may not happen in the future, he says.

Cllr Hayhurst calls for another vote to refuse the Preston New Road application. He says the written advice is not as strong as the verbal advice the committee received yesterday in a private meeting. Cllr David Howarth agrees the advice is different. Cllr Alan Schofield says the advice is essentially the same and there is no need for another vote.

Councillors return to the meeting

Meeting adjourns for 15 minutes for distribution of legal advice to members of the public and a supplementary email, received by one committee member, to be given to all councillors on the committee. Link to legal advice

Complaints about the sound system