Keep in touch here with what’s happening at the Lancashire County Council committee that is deciding Cuadrilla’s application to frack at Preston New Road. Updates as they happen.

The cabinet member for planning, Cllr Marcus Johnson, who voted against refusal, said he stood by the decision of the committee and its view that there were sustainable reasons for refusal

Cllr Paul Hayhurst says it is a good day for democracy. He said he was representing his constituents with illnesses who wanted to sell their homes and found, because the application, they had been unable to.

Standing ovation as the vote is announced

Cllr Hayhurst reads out his motion to refuse the application

Cllr Michael Green said he would be voting to refuse the application. “I had concerns last week with the visual impact and the impact on the landscape.  I was minded to refuse last week”, he said. Verbal advice from the council’s legal officer said it was unreasonable and unlawful to refuse . For that reason, he abstained last week. “Not a position I was particularly pleased about.” Additional advice showed that the committee could take a decision to refuse that would not be unlawful he said..

Cllr Terry Aldridge said it would be up to the people of Lancashire to pick up the tab if anything went wrong, should the application be approved.

Cllr Marcus Johnston said “This is crunch time”. He said if the decision was refused it was likely that the committee members would have to give evidence at an appeal. The committee would have to sort this out, he said.

Cllr Barry Yates says there are no good reasons for refusing the application.  We should go ahead with the exploration wells, he said. He moves a motion to approve the application with the extra condition of public liability insurance for the operation.

Jill Anderson of the council’s legal team says the officers’ advice remains the same: there are no substantive reasons for refusal. But she said the risk of costs in the event of an appeal was not a material reason for refusal.

Councillors return to the committee room and meeting resumes

Cllr Paul Hayhurst proposes a motion to refuse the application on visual impact and noise, which makes it contrary to Lancashire Waste and Minerals Plan, policy DM2 and Fylde Local Plan policies EP11 and EP27. He said the application could have been sited at a business park one mile away. Nobody there would be affected by noise, light or visual impact, he said. He added the noise mitigation screens proposed for Preston New Road would be twice the height of the council chamber.

Cllr Paul Hayhurst says the committee has handled the Preston New Road application “very badly”. He also says he was “very angry” when he saw the council’s written legal advice from its QC because it was not as strong as that given verbally by officers.

Opponents take their seat in the council chamber.

Jill Anderson, of Lancashire County Council’s legal team, in her seat in the council chamber at County Hall, in Preston.

Anti-fracking campaigners display a giant open letter of support to councillors. The letter, by Frack Free Lancashire coalition of campaign groups, offers to meet the costs to the council of any appeal by Cuadrilla against refusal. Martin, of FFL,said: “They [the councillors] must have had a dreadful weekend. … The point of this card is to show that we support you but we are also putting our money where our mouths are. If it comes to a fist fight with Cuadrilla we will find your legal costs.” 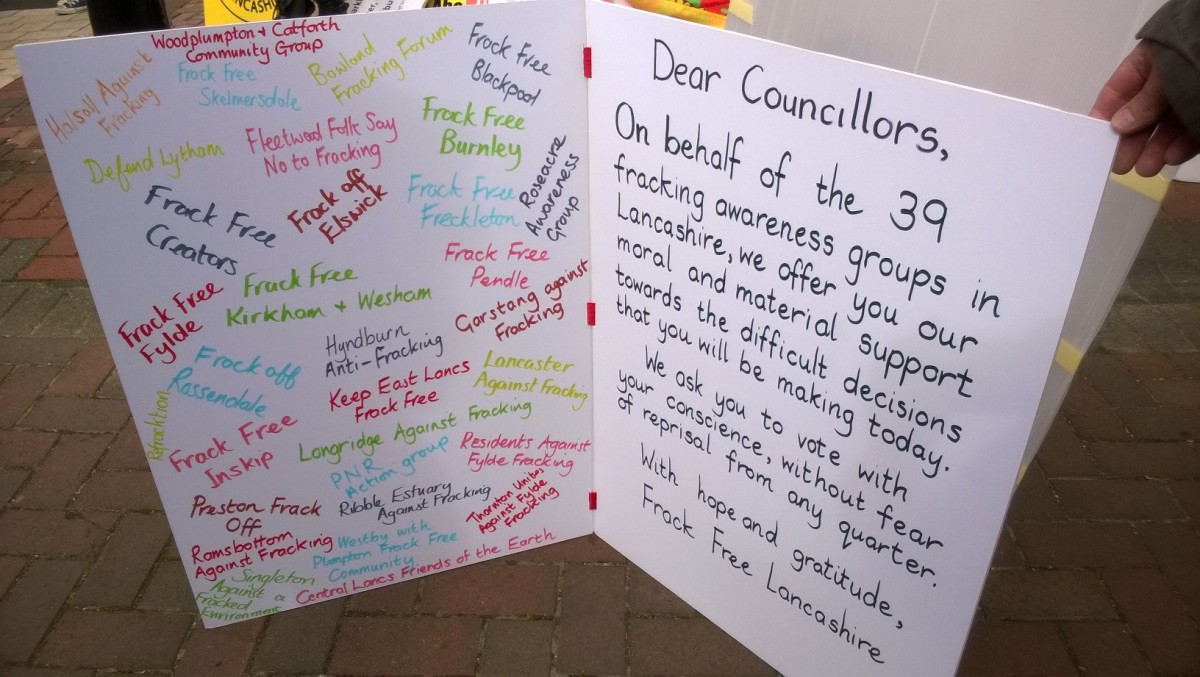 Greeting card to councillors on the committee

Campaigners gather outside County Hall in Preston where the development control committee meets to decide Cuadrilla’s application to drill, frack and test up to four wells at Preston New Road, Little Plumpton. 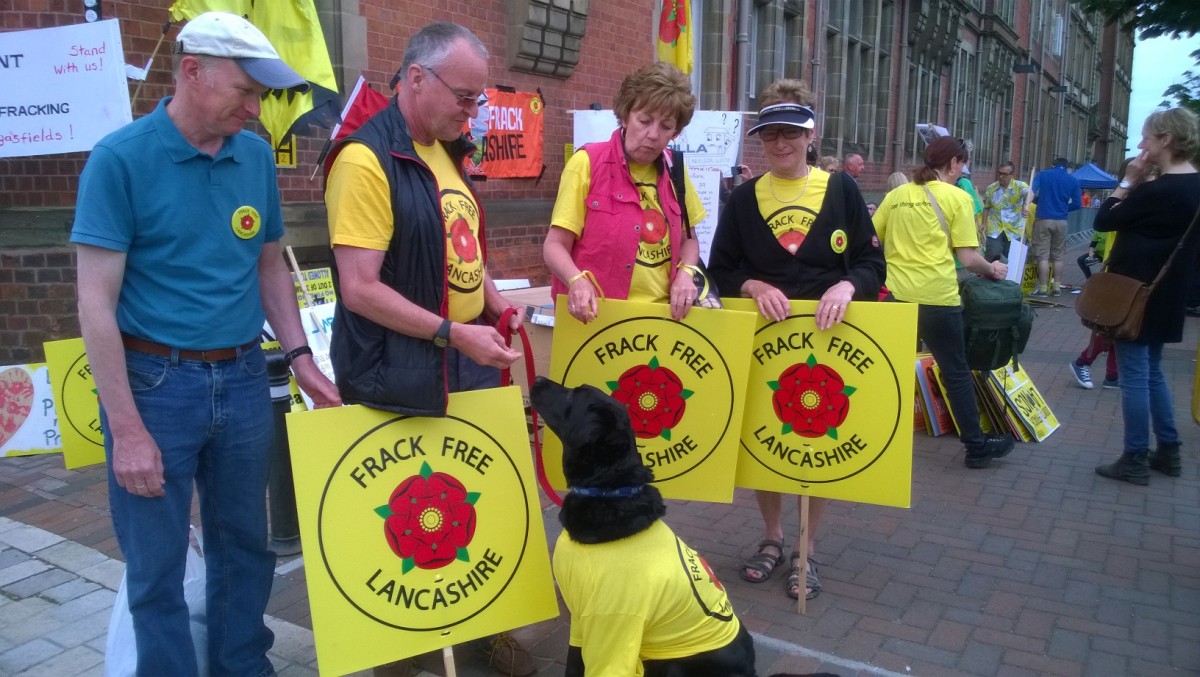 What the application supporters said

What the application opponents said

Scenes from outside County Hall