A group opposed to fracking in Lancashire is taking inspiration from a Christmas decoration as it prepares to challenge the drilling industry for a second time.

The Preston New Road Action Group will be contesting Cuadrilla’s planning appeal – to be heard at a public inquiry next month – against the refusal of permission to frack at Preston New Road. 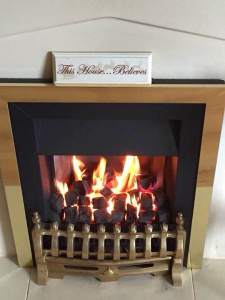 Its chair, Pat Davies, found an ornamental sign with the words “This House … Believes” when she was decorating her house for Christmas.

The group said the sign had inspired members to refocus the campaign for the appeal and beyond.

“By using a simple idea and a dedicated hashtag #webelieve on social media, we can draw together support across the UK from communities who will be affected by fracking without their consent.”

“This is now a large human rights issue. We have to remain committed to the belief of a fair, democratic society and that it should be our local elected representatives only who have the power to determine Lancashire’s future.”

Cuadrilla is appealing against the refusals of planning permission and the conditions attached to the approval. The public inquiry is due to start on 9th February at Blackpool Football Club.

Preston New Road Action Group (PNRAG) is one of five organisations that will play an official role at the inquiry, alongside Cuadrilla and Lancashire County Council. They will be able to call witnesses and cross-examine the company and council. The others organisations are: Roseacre Awareness Group, Friends of the Earth and Treales, Roseacre and Wharles Parish Council (all opposed to the application) and the North and Western Lancashire Chamber of Commerce (in favour of the application).

Mrs Davies said PNRAG had fought a “David and Goliath battle” so far to inform the local councils about their case against fracking.

“We’re not campaigners; we’re only residents, in particular, ones who haven’t protested before.

“Largely self-funding, we have absolutely nothing to gain unlike many people who are pro this industry. They see themselves profiting from fracking at locals’ expense. We are merely guardians of our community.”

“Having studied this application in minute detail for two years, it’s laughable when often non-local people looking for profit at this community’s expense try to dismiss us as either ill-informed or a minority: we are neither. We believe people come before profit.”

When Cuadrilla announced it was appealing, the chief executive, Francis Egan, said:

“I understand that some people would prefer that we did not appeal but I am confident that we will demonstrate to Lancashire and the UK that shale gas exploration and fracking is not only safe but represents a very real opportunity to create jobs, fuel businesses, heat UK homes and stimulate significant local economic growth.”

The Local Government Secretary, Greg Clark, has used his powers to “recover” the appeal. This means he will make the final decision, following a recommendation by the planning inspector for the inquiry.