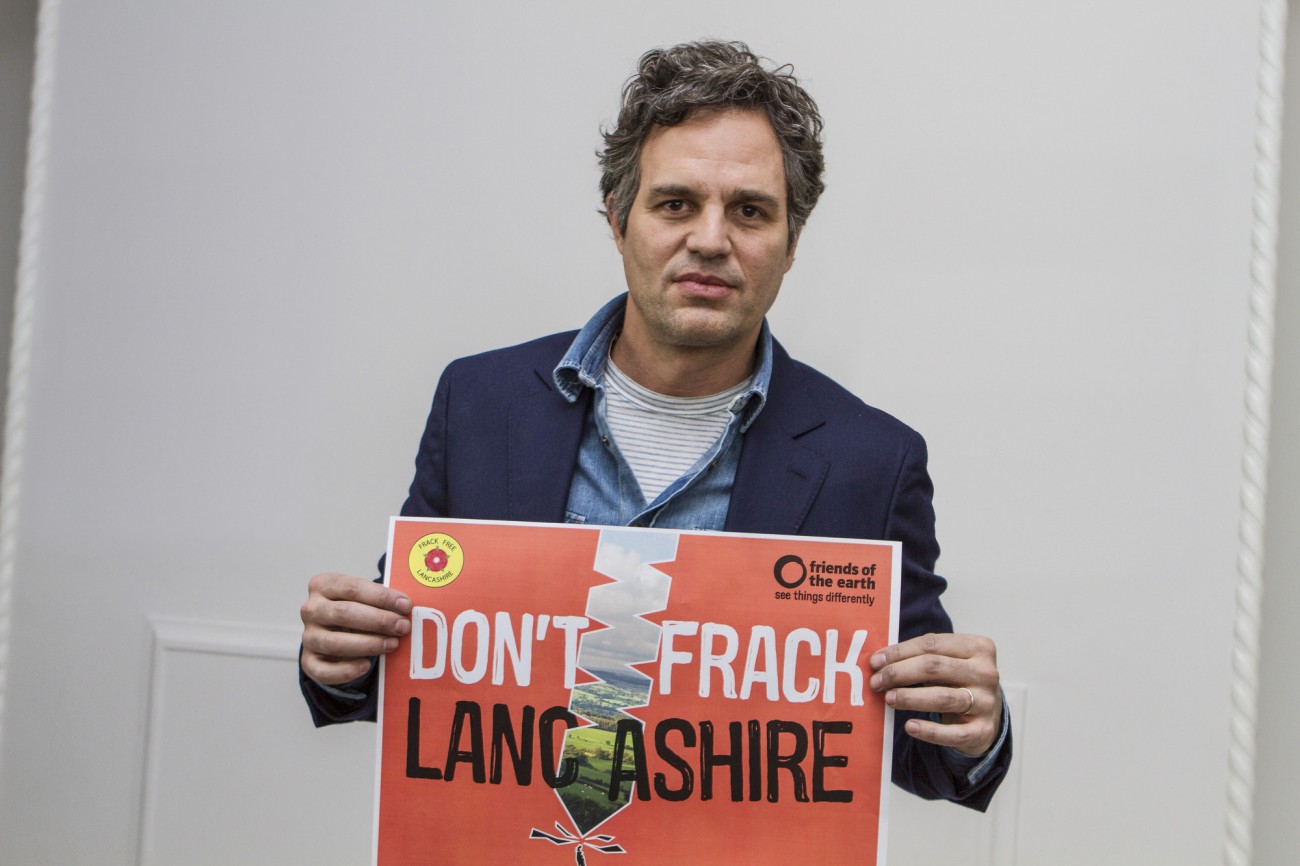 Photo: Friends of the Earth

On the eve of the public inquiry into Cuadrilla’s Lancashire shale gas plans, the Oscar nominated actor, Mark Ruffalo, has urged the Prime Minister to ban fracking in the UK.

In an interview with the campaign group, Friends of the Earth, the US actor said David Cameron was making “an enormous mistake” over fracking. And he accused the Prime Minister of going back on his word that communities would be involved in shale gas decisions.

Ruffalo, nominated for an Oscar and BAFTA for his role in the film, Spotlight, was involved in the campaign to ban fracking in New York state. In October 2015, he joined calls for a moratorium in Pennsylvania. He also founded the environmental group, Water Defense, following reports of water contamination in Dimock. He said:

“I personally have experienced the dangers and horrors of hydro-fracking”.

“I’m imploring you, people of England, to fight against it”.

In a direct message to David Cameron, he urged the Prime Minister to be a “true and honest world leader and leave fossil fuels in the ground”.

“And not only that but your people don’t want it”.

“You have already told them once before that if they didn’t want it you wouldn’t push them to take it. And you’re turning back on your word, Sir, and what is a politician if he is not credible.”

The inquiry, which begins tomorrow (Tuesday 9th February 2016), will hear from more than 20 expert witnesses, as well as local people in favour and against Cuadrilla’s plans. The company is appealing against the refusal of planning permission to frack up to eight wells across sites at Preston New Road and Roseacre Wood in the Fylde.

The hearings will be chaired by the planning inspector, Wendy McKay, but the final decision will be made by the Secretary of State for Communities and Local Government, Greg Clark, under the “recovered appeals” procedure. The inquiry is expected to last until 11th March 2016. More details.

Donna Hume, a senior campaigner with Friends of the Earth, said Mr Cameron was turning his back on Lancashire by “ignoring their local democratic decision to reject fracking”. She said:

“The Government admits that the more people know about fracking, the more they oppose it. That’s why Mark Ruffalo, who has seen the impacts of fracking first-hand, doesn’t want Lancashire to suffer the same impacts as so many states in the US.”

“Mark Ruffalo is right: Mr Cameron must listen to the people of Lancashire and not force this risky and unpopular industry on the county or anywhere else in England.”

“Mr Cameron you are making an enormous mistake and it’s a legacy mistake, because there is no fracking that can be done safely.”

“And not only that but your people don’t want it. You have already told them once before that if they didn’t want it you wouldn’t push them to take it. And you’re turning back on your word, Sir, and what is a politician if he is not credible.”

“So I would say to you this is a wonderful opportunity for you to honour your people, to honour their will, but also to take them in to the renewable energy future of the world. And to be a real true and honest world leader and leave the fossil fuels in the ground.”

“We’re being told by every single scientist in the world that we must leave 70% of this in the ground if we are to have a chance at all. And to join us in the rest of the world in making this monumental transition to a cleaner, safer, more just world.”