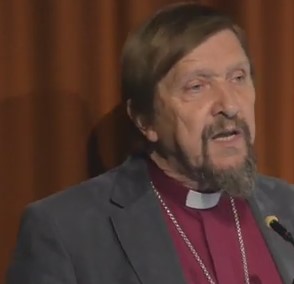 A retired bishop who lives half a mile from Third Energy’s approved fracking site in North Yorkshire told a parliamentary group yesterday that community benefits would not compensate his village for the impacts of fracking.

The Right Reverend Graham Cray, from Kirby Misperton, was giving evidence to the All Party Parliamentary Group on shale gas regulation.

He told the meeting:

“The view in my village is that people don’t want fracking at any price.”

The shale gas industry has committed to paying £100,000 for each exploration site which uses fracking. If sites go into production, operators will pay 1% of revenues to local communities.

“Money cannot compensate for threats to health, jobs in agriculture and tourism or falling house prices. I know of no one in my village or surrounding villages who supports this.”

He said payments from the industry or from the government’s proposed shale wealth fund would be trivial compared with the loss of a home’s saleability or its value. He said people in Kirby Misperton saw payments as compensation for harm to their village.

But he was concerned that the money could divide communities.

“If you draw a circle what do you do with the people just outside. The potential impact of dividing communities is very substantial.”

Rt Rev Cray said if fracking went ahead, the industry should be required to put up an additional bond that would cover any damage to the community.

The meeting also heard from representatives of shale gas operators, the distribution company Northern Gas Networks and the industry organisation, UK Onshore Oil and Gas (UKOOG), which has developed the community benefit scheme.

Ken Cronin, Chief Executive of UKOOG, said communities should feel the benefit of hosting a shale gas site. The proposed payments went much wider than compensation. He said there had been predictions that the value of homes near wind farms would fall but this hadn’t happened.

John Blaymires, Chief Operating Officer of the shale company, IGas, said the disruption from operations was comparable to other rural activities, including farming.

David Gill, of Northern Gas Networks, said his company was considering extending the gas network to villages that hosted fracking sites but were currently not on a pipeline.

“Most of my neighbours, if this happened, would believe it was a very high price to pay [for a gas connection]”.

The meeting heard from Tom Pickering, Director of INEOS Upstream, that his company was preparing to go further than the UKOOG scheme. It proposed to pay 4% of revenues to owners of land below which shale gas was extracted and 2% to the wider community.

Mr Hollinrake asked IGas and Third Energy why they were not offering payments at this level:

“If you are going to make communities feel favourable, 6% is much more than 1%.”

Mr Blaymires and David Robottom, Chief Finance Director of Third Energy, said they first wanted to see the results of UKOOG’s community benefit pilot schemes, planned for Lancashire and North Yorkshire if fracking went ahead in these regions.

How community benefits will work

Fabian French, chief executive of UK Community Foundations, told the meeting how the money would be distributed.

Mr French said what defined a community would vary from place to place:

“It will be for the foundation to decide. That is why we are doing the pilots which will allow us to work out what is the correct definition.”

Who’s going to pay what to whom?

Revenue from production: 4% to owners of land above which gas was extracted and 2% to the wider community

One-off payment from the shale industry of £20,000 for each horizontal well that extends by more than 200m laterally made to owners of land above

IGas runs a community fund, which it says has allocated grants of £850,000 since 2008 to “help local communities” near the company’s oil and gas sites.