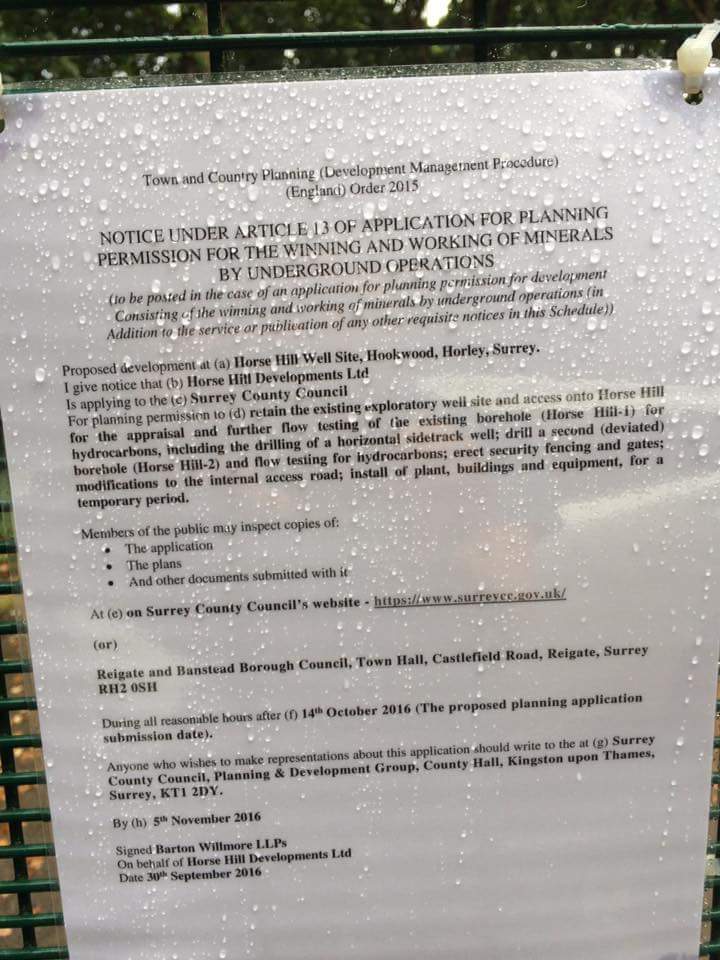 The company behind the Horse Hill oil well near Gatwick in Surrey has confirmed it will submit a new planning application for the site in the next few weeks.

Horse Hill Developments Ltd has posted an official notice at the site about its plans.

The notice, dated yesterday (30 September 2016), is required under Article 13 of the Town and County Planning (Development Management Procedure) Order 2015. This obliges people proposing to apply for planning permission for mineral working to inform owners or tenants of land to which the application relates.

Under the order, the notice must be displayed for not less than seven days in the period of 21 days immediately before the application is made to the local planning authority.

Any representations must be made by 5 November 2016. This period does not replace any public consultation period when the application has been submitted and published.

When submitted, the application must be validated by planners at Surrey County Council. This means the company has completed the application form, supplied the required information and paid the correct fee.

The application will then be posted on the council’s planning website and open for public comments. The consultation period usually lasts at least three weeks but can be six weeks or more.

DrillOrDrop will report on the contents on the application when it becomes public.

The Article 13 notice describes the proposed work as:

“Retain the existing exploratory well site and access onto Horse Hill for the appraisal and further flow testing of the existing bore hole (Horse Hill-1) for hydrocarbons, including the drilling of a horizontal sidetrack well; drill a second (deviated) borehole (Horse Hill-2) and flow testing for hydrocarbons; erect security fencing and gates; modifications to the internal access road; install of plant, buildings and equipment, for a temporary period.”

The original planning permission for Horse Hill was granted by Surrey County Council on 16th January 2012 (SCC 2010/0197). It covered site construction, drilling the Horse Hill-1 well and short-term testing only.

Results of the initial flow tests, carried out in February 2016, were described as “outstanding”, leading to the nick-name “Gatwick Gusher”.

At an exhibition in July, Horse Hill Developments Ltd (HHDL) said it wanted to carry out extended flow testing of four sections of the Horse Hill-1 well. The tests would each last up to 90 days (or around a year in total) and involve flaring of gas.

The outcome of the tests would determine whether the sidetrack and deviated wells would then be drilled, according to staff at the exhibition. They included Stephen Sanderson, executive chairman of the majority investor in HHDL, UK Oil & Gas (Investments) Ltd.

UK Oil & Gas has submitted an application to the South Downs National Park for 20 years of oil production at a site at Markwells Wood in West Sussex. DrillOrDrop report