Updated: Pictures and messages from United Against Fracking rally 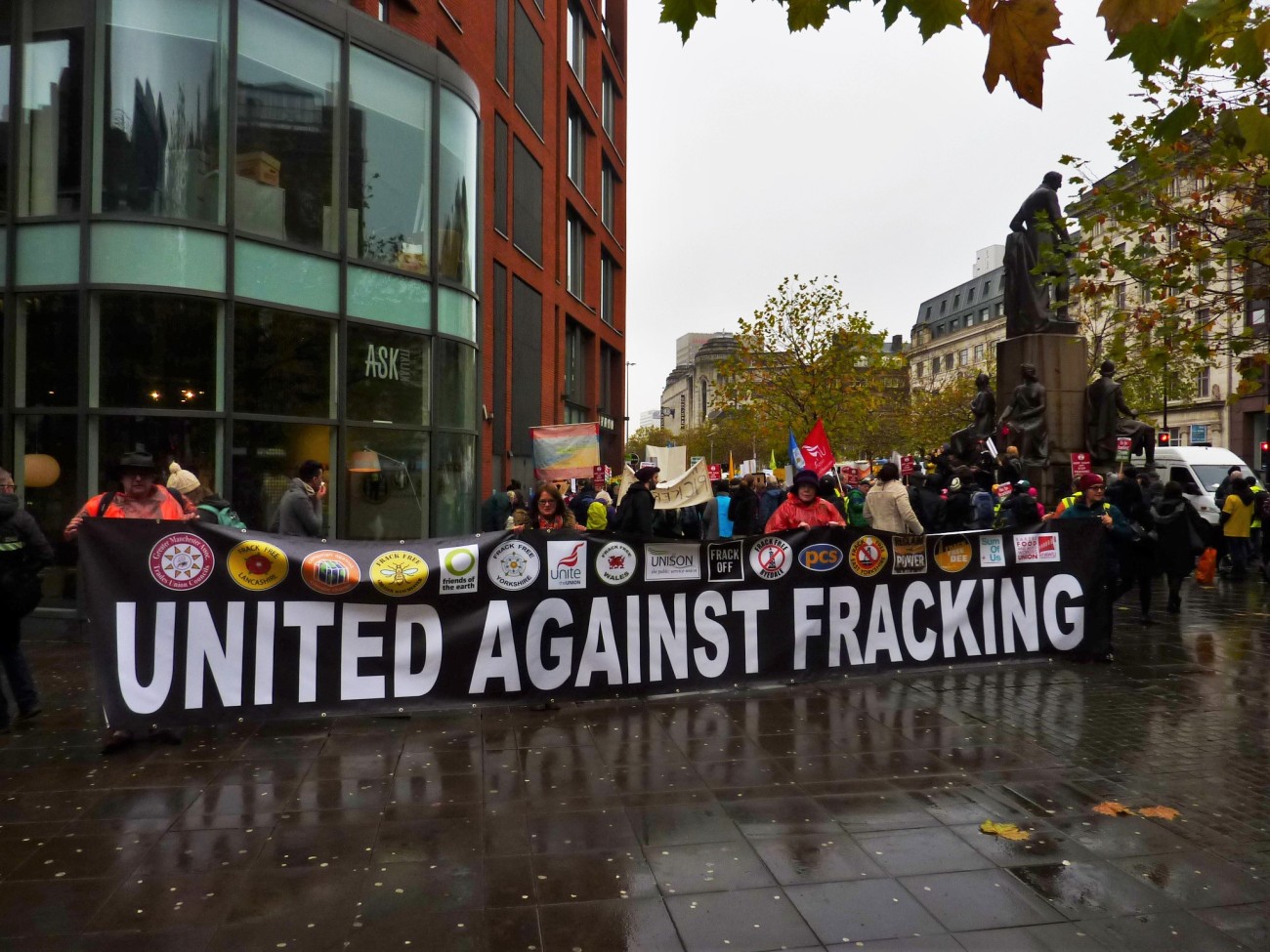 Organisers estimated up to 2,000 anti-fracking campaigners marched through Manchester today as part of the United Against Fracking demonstration. Police estimated the numbers at about 1,000.

Campaigners from across the UK gathered in Piccadilly Gardens before marching through the city centre to Castlefield Bowl for a rally with speeches.

DrillOrDrop followed the event and reports on the key messages from speakers. 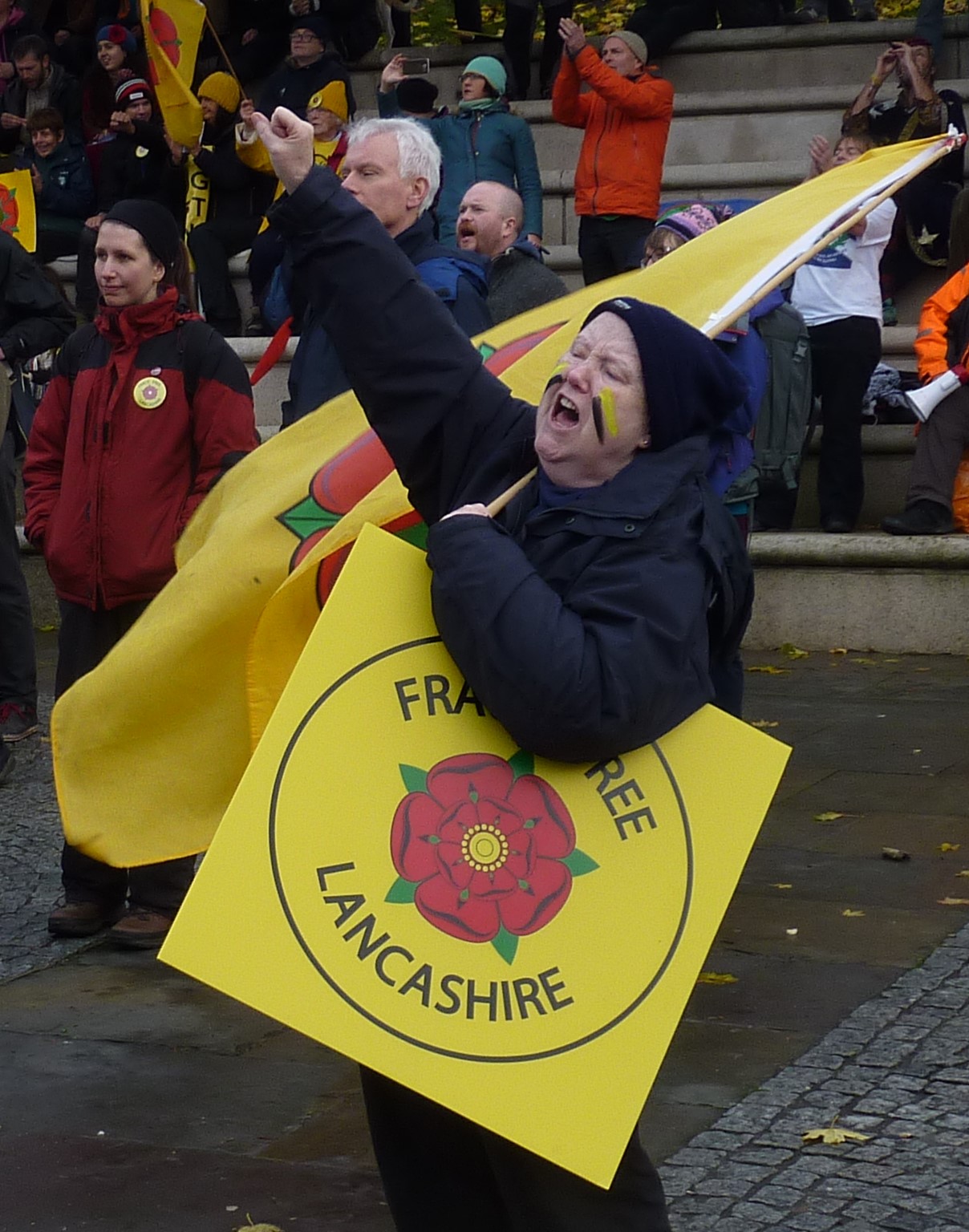 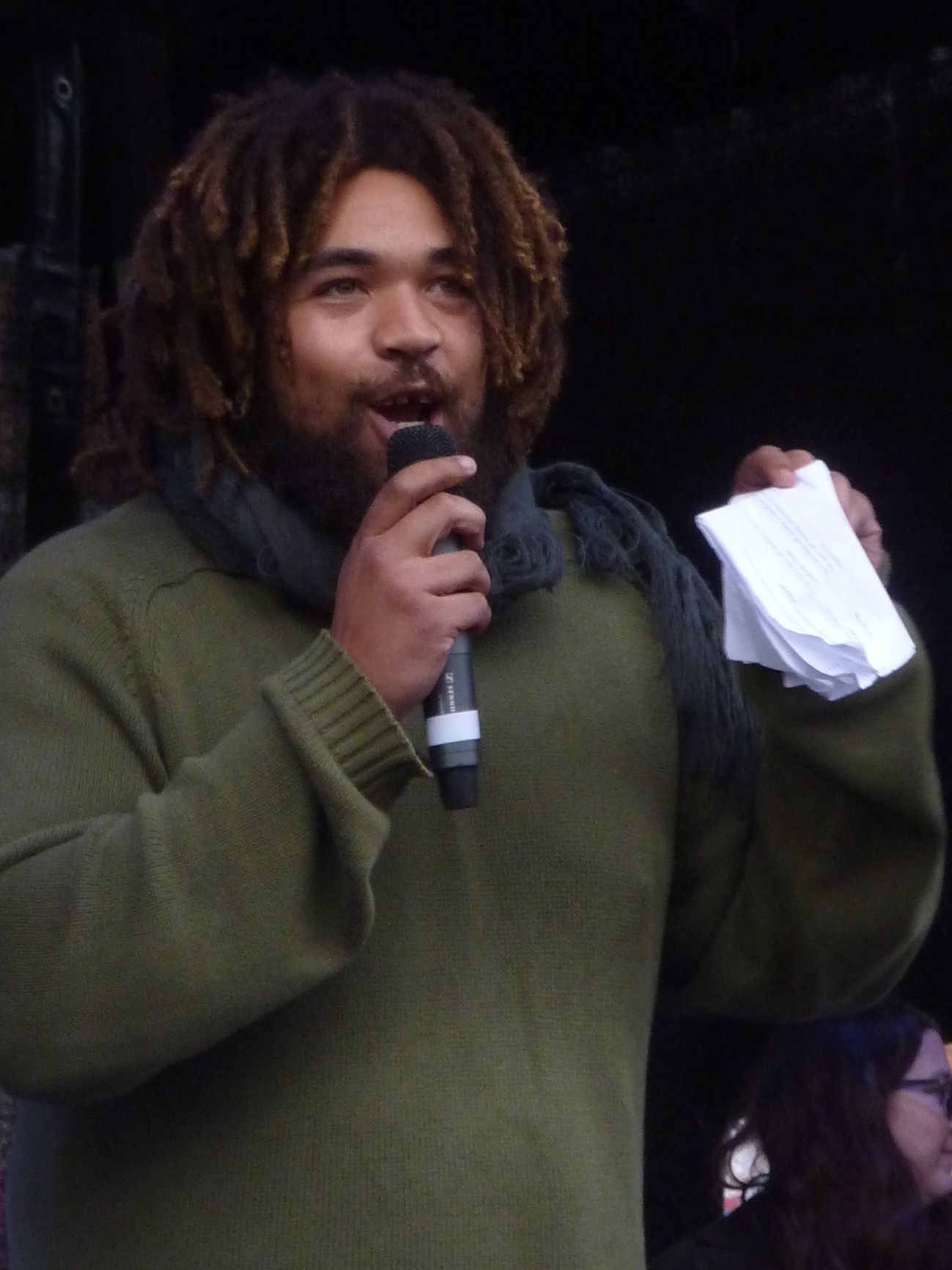 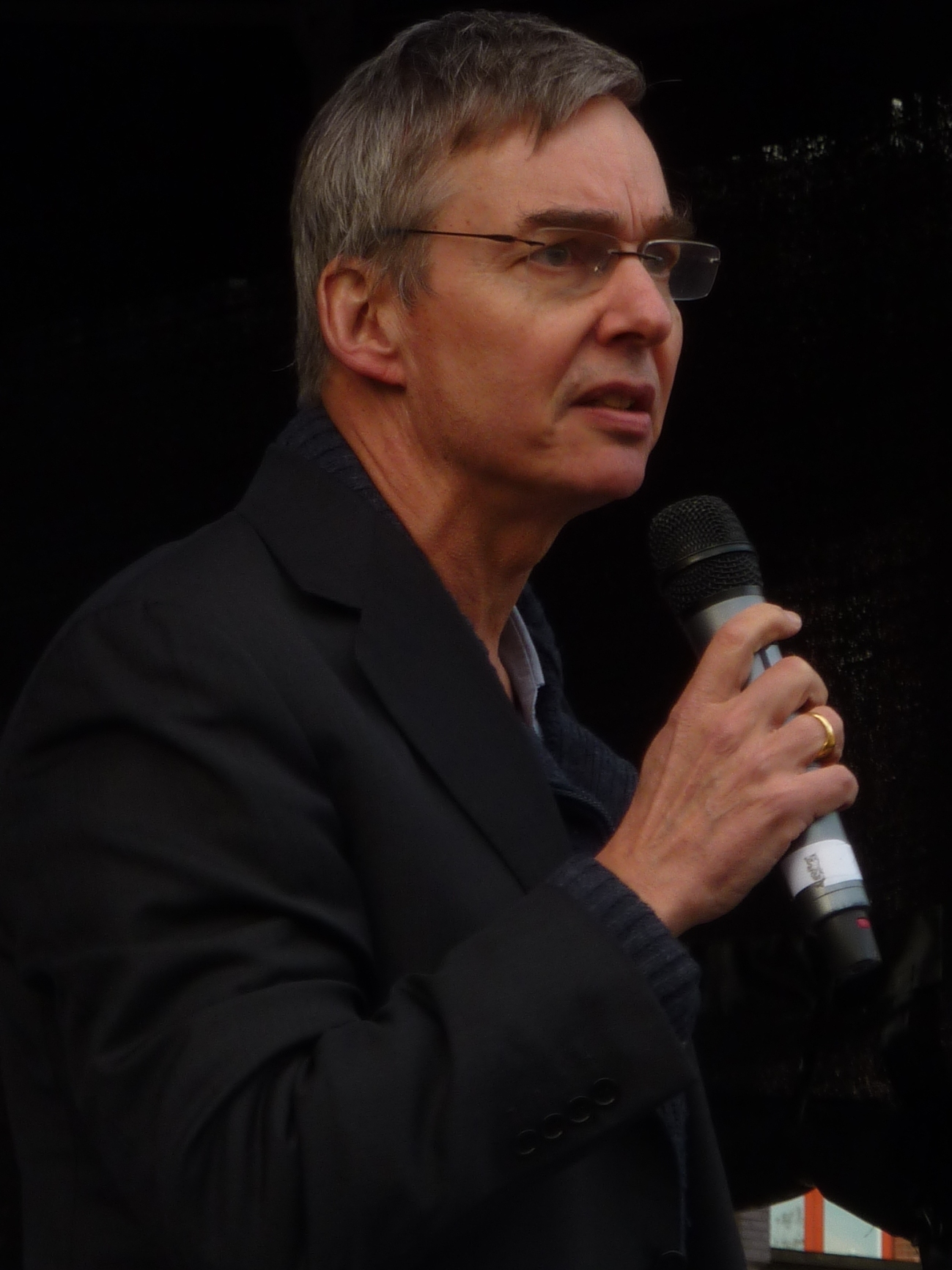 “In England, fracking is dead in the water because we are going to stop it.

“Our enemies fight from gated palaces separate from the people. We are the people and you cannot defeat the people.

“We need to stay united against fracking. Roseacre can win. Preston New Road can win but only if we stay together.

Mr Ashton said Andy Burnham had promised if he became mayor of Greater Manchester that there would be a proper memorial to the Peterloo Massacre of 1819, when cavalry charged into a crowd of 60,000 which had gathered to demand the reform of parliamentary representation. Mr Ashton told the crowd:

“That will be our memorial because we stand up because we care and because we don’t want injustice and tyranny.”

“We fight for a frack free future for our children and ourselves. I wish I was there with you today. All power to your elbows.” 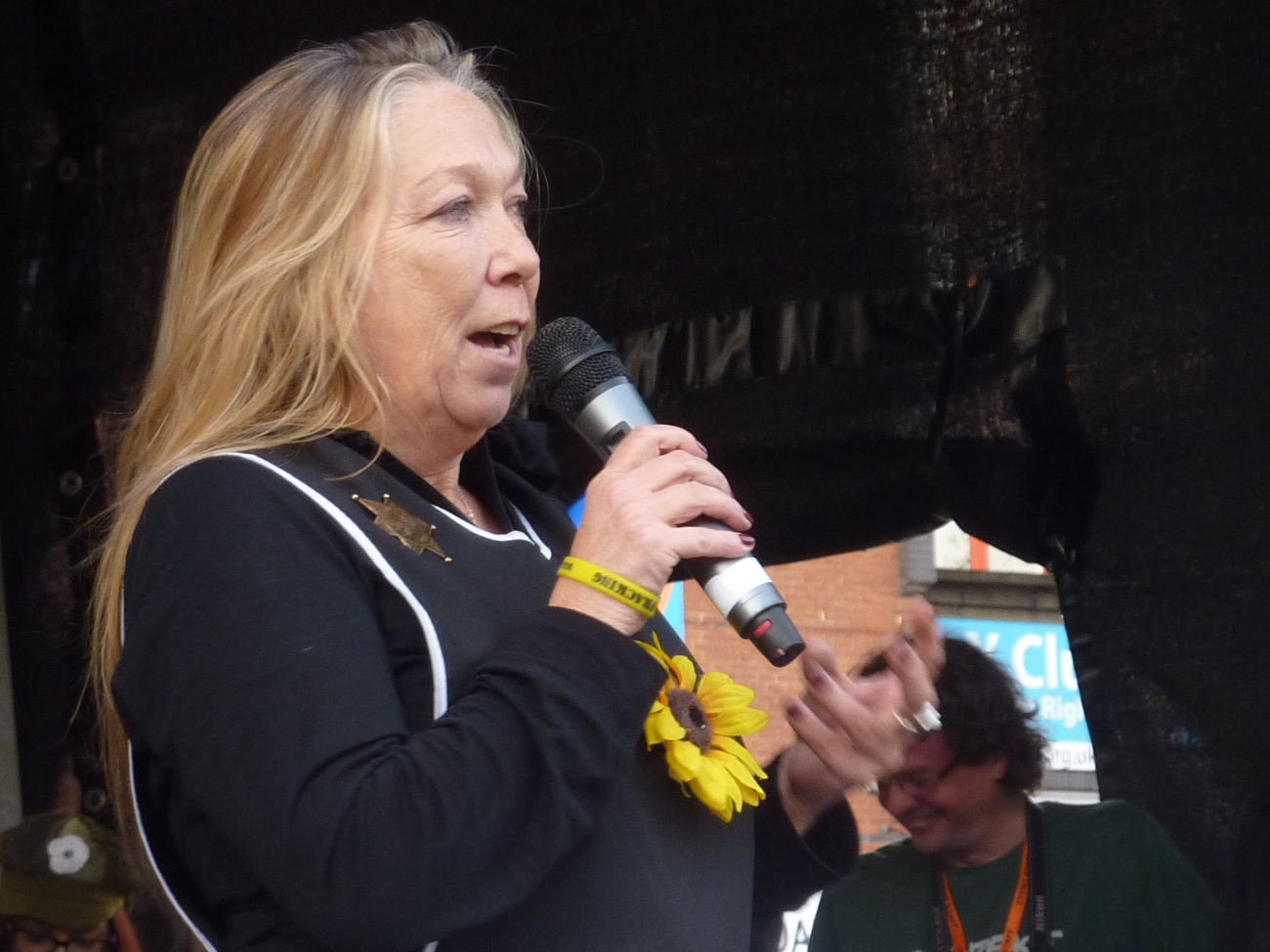 “We are in a unique position. Fracking is not happening in the UK. We are not stopping it. We are not letting it happen. Once it starts they have the law on their sides.”

The crowd heard that Ms Rothery had been ordered to appear in court in Preston at 11am on Friday 9 December charged with contempt of court. The case arises from a long-running dispute over legal costs with the shale gas company, Cuadrilla.

Ms Rothery faces two weeks in prison after refusing to disclose financial information to the court. Cuadrilla had been awarded costs amounting to more than £50,000 after Ms Rothery asked for an adjournment of an eviction hearing. If the sentence is imposed, she will be the first woman to be sent to prison in case related to the campaign against fracking.. 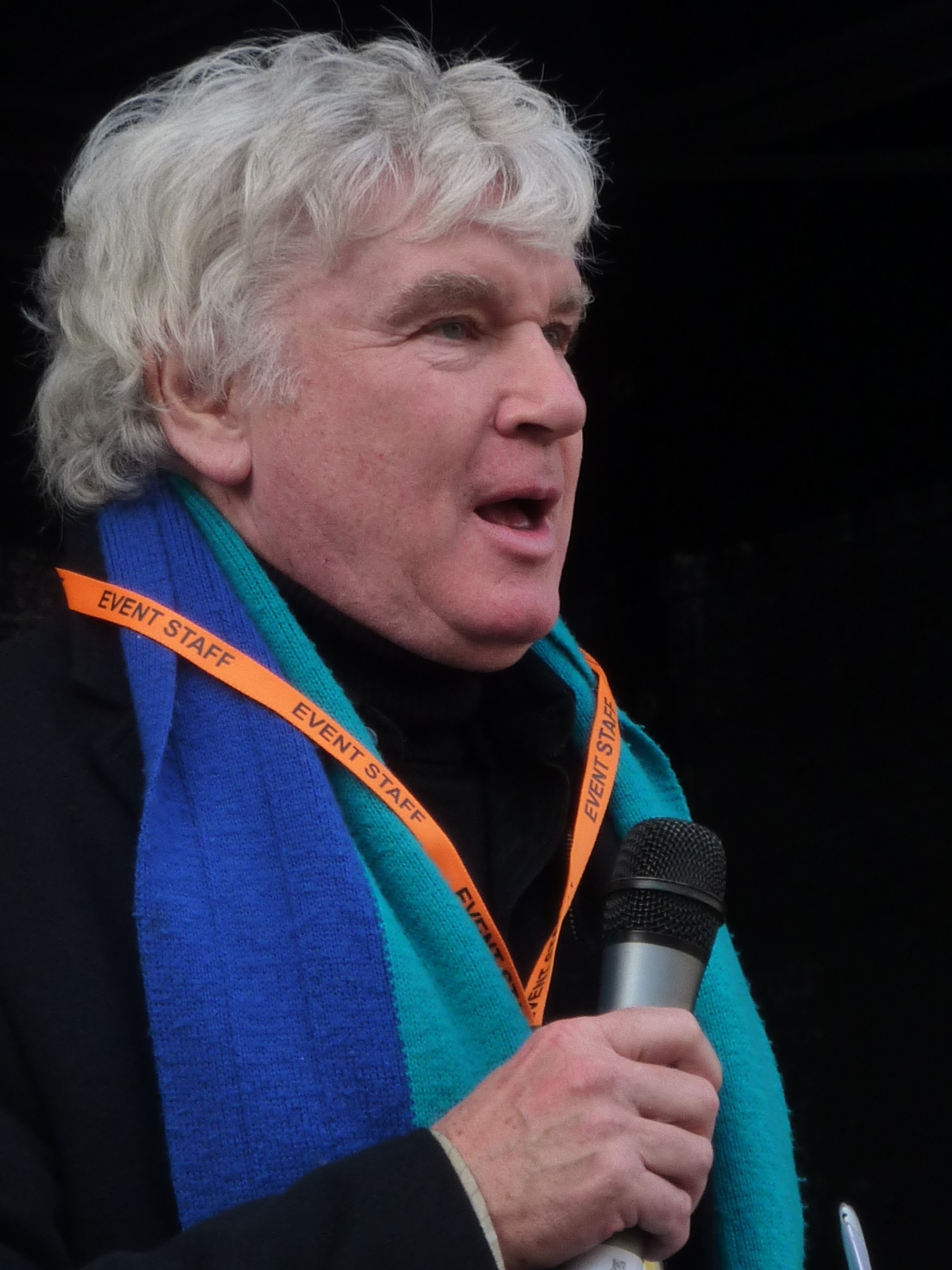 David Smythe said the US shale gas industry was $200bn in debt. Extracting shale gas in the UK would be two-three times more expensive than it was in the US. He told the crowd:

“My message to you is to keep up the pressure by all legal means at the local level because I think within a year the investors in Cuadrilla, Third Energy, INEOS and IGas will pull the plug.

“No investors will come forward to put money in something that is not financially viable.

“We just have to hang in there.”

David Smythe said Glasgow University had not responded by last night’s deadline to his crowd-funded legal challenge over the withdrawal of his academic email and journal access. He said he had been told he had a very strong case. He said: “We shall win”.

He also revealed that the play Fracked! Or don’t mention the F-word, staring James Bolan and Anne Reid, which staged at Chichester to sell-out audiences in the summer is to go on tour and to the West End. 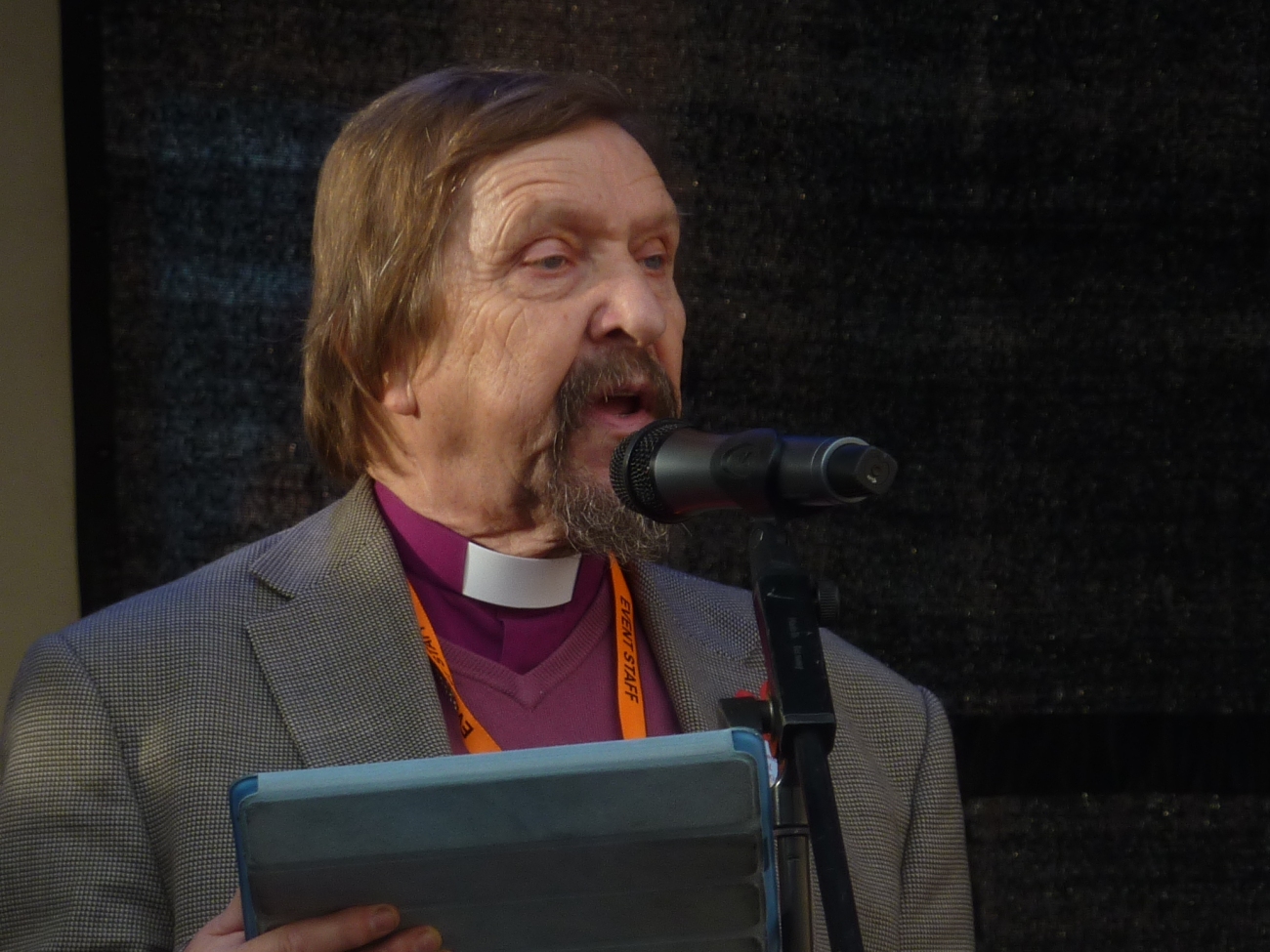 “The planet is a gift not a possession to use as we wish.

“Fracking is not for the common good. It has no social licence. It is imposed on unwilling communities democracy will be undermined.

The fact that we can extract shale gas is not a moral reason to do it.” 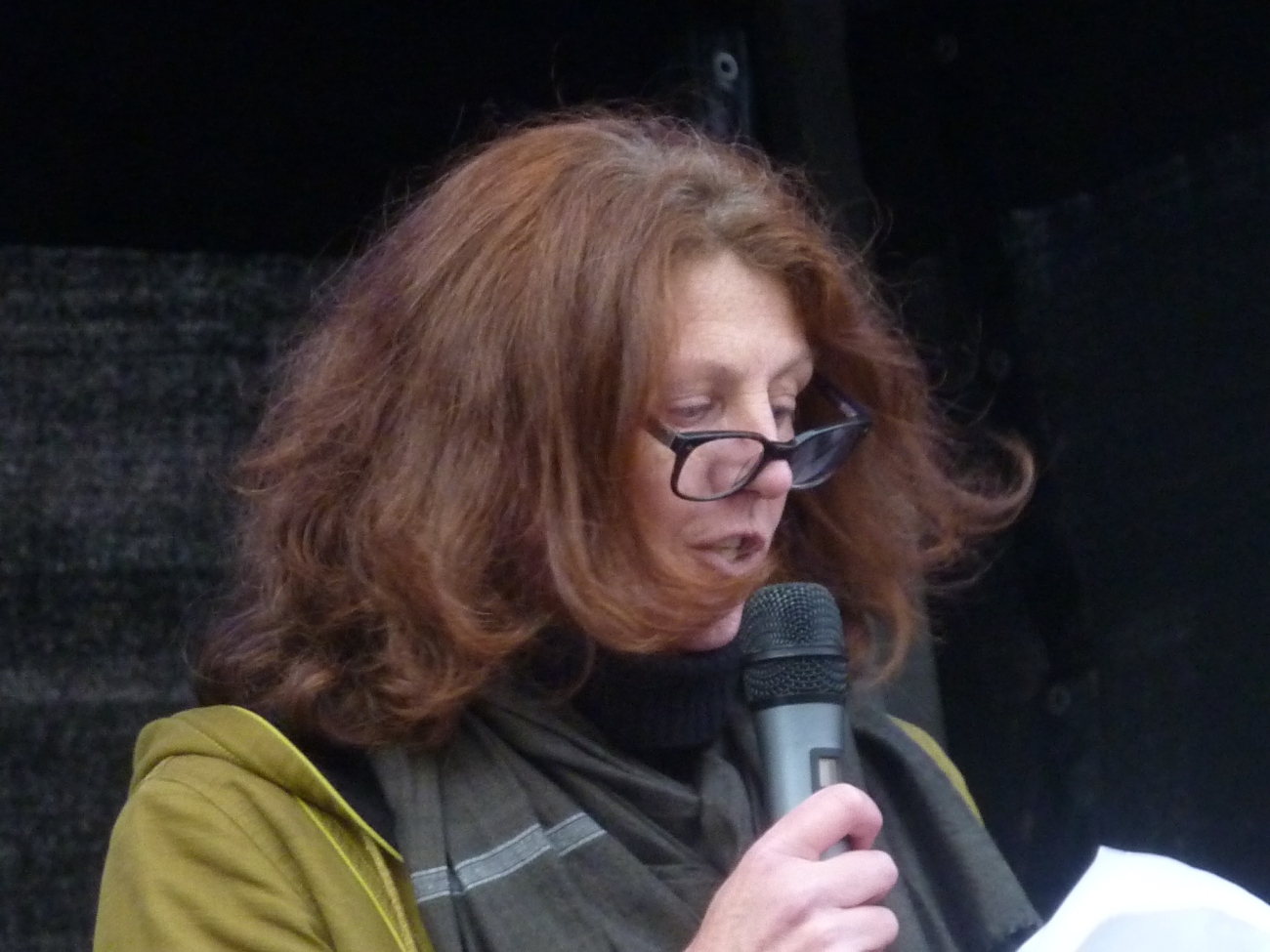 “We have been betrayed by our government.

“Whoever is in the White House or in Number 10, we need to make sure they do not hoodwink us into believing that fracking is the future of our energy policy.

“Our leaders need to respect the science of climate change. The science is not negotiable. We must respect the facts and build a green future because our lives depend on it”. 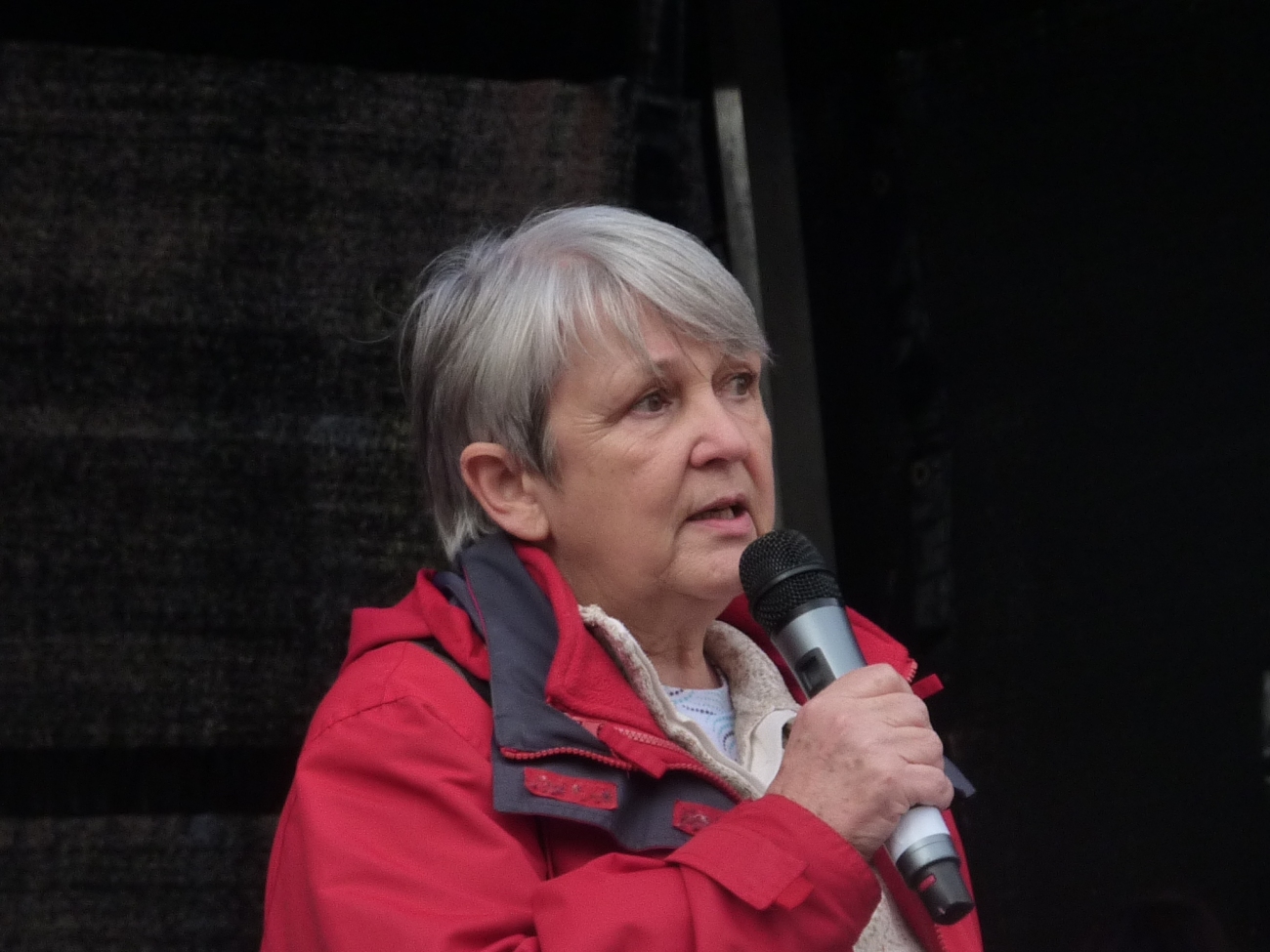 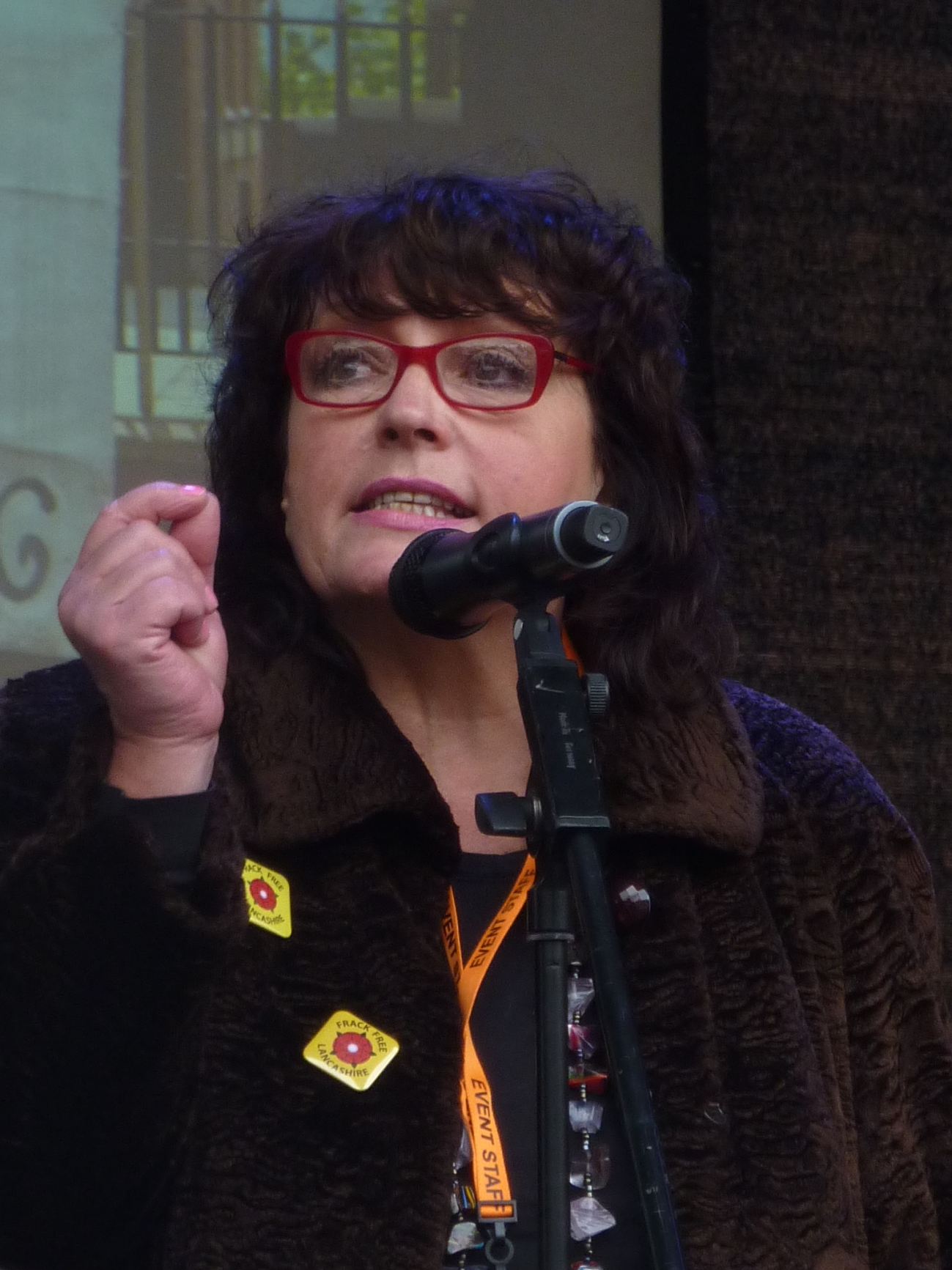 “When is democracy, not democracy? When the government is interfering in local decisions.

“When is fracking not fracking? When the government chooses to redefine it in the Infrastructure Act. What a total insult to the intelligence of people in this country that our government thinks that if they don’t mention the F-word we won’t worry about it.

“We say to our government: ‘Listen to the many, not the money’.

“Say no to fracking in Lancashire and elsewhere because the day we stop doing that is the day we say yes.” 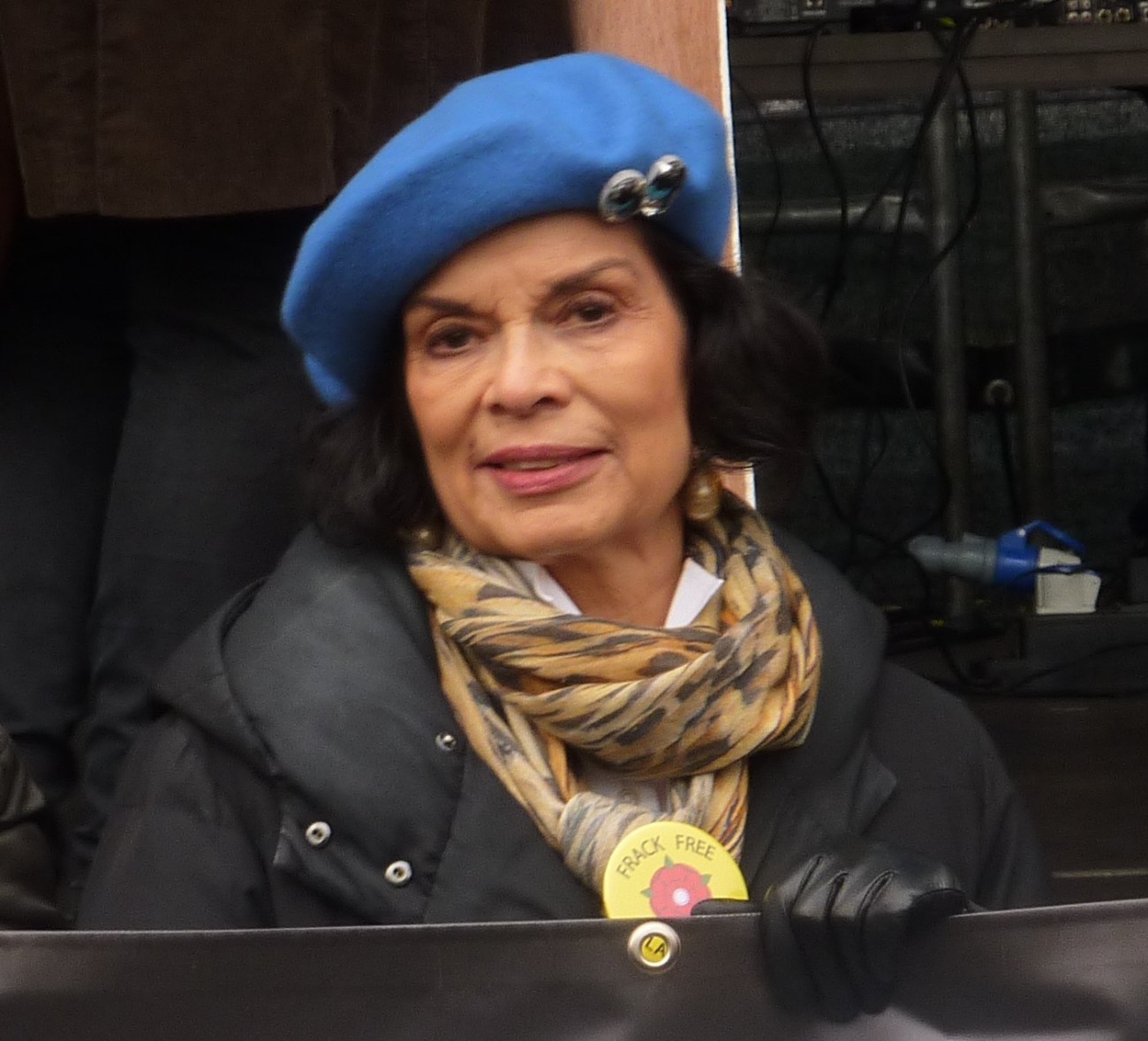 “I am here as a mother, a grandmother and a great grandmother. I believe fracking is a threat to our way of life, to our water supplies, to the air we breathe and to the environment.

“It is time for the government of the UK to stop its incestuous relationship with the oil and gas industry. Fracking is not the panacea they have told us it is.

Theresa May must understand that the people of this country are serious, that they mean what they say when they come out for a rally like this.

“You are not alone. I am with you and there are millions of people who support your struggle. We will defeat fracking.”

1.40pm
Morgan Marshall, 13, playing Do you hear the people sing? with specially-adapted lyrics 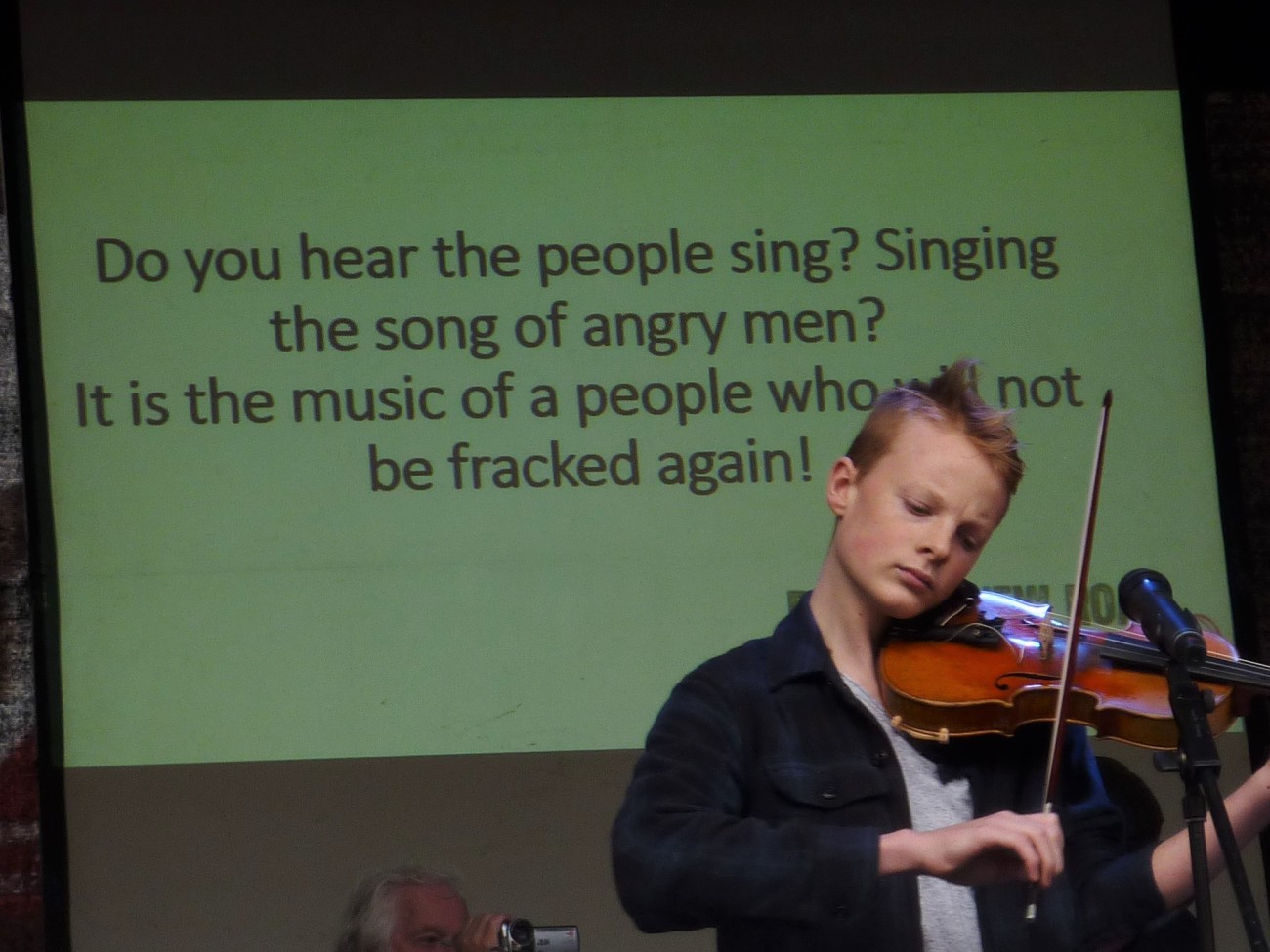 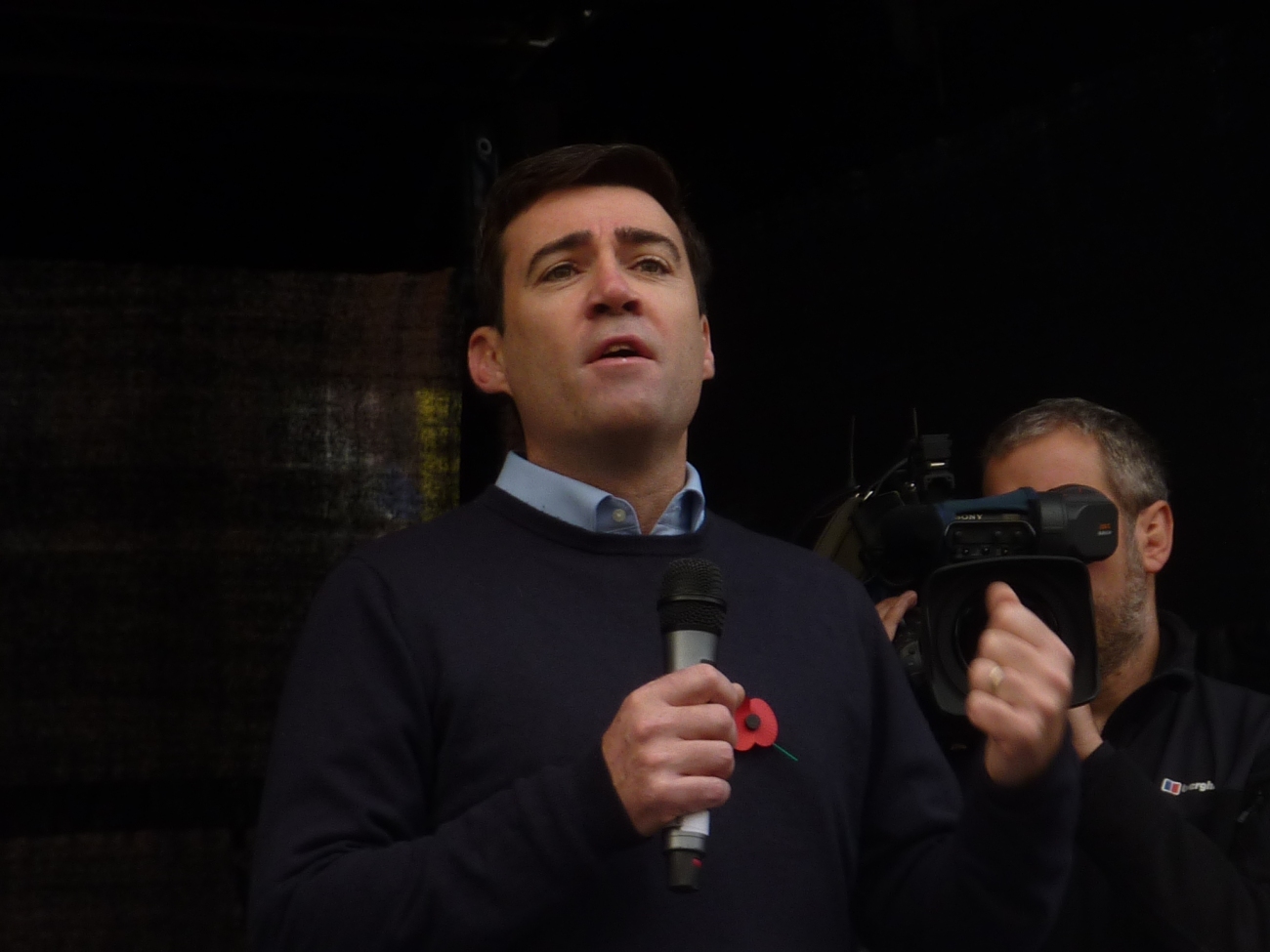 “I was surprised to see that there were exploration licences in Leigh. I looked into fracking and realised that I could not support it because of the risk to your geology and our green spaces.

“What worries me is that the government has taken powers to impose it on local people. They have taken the say of local people and I will stand against it if I am elected mayor of Greater Manchester.

“The case for fracking has not been made. It belongs in the past, not the future.” 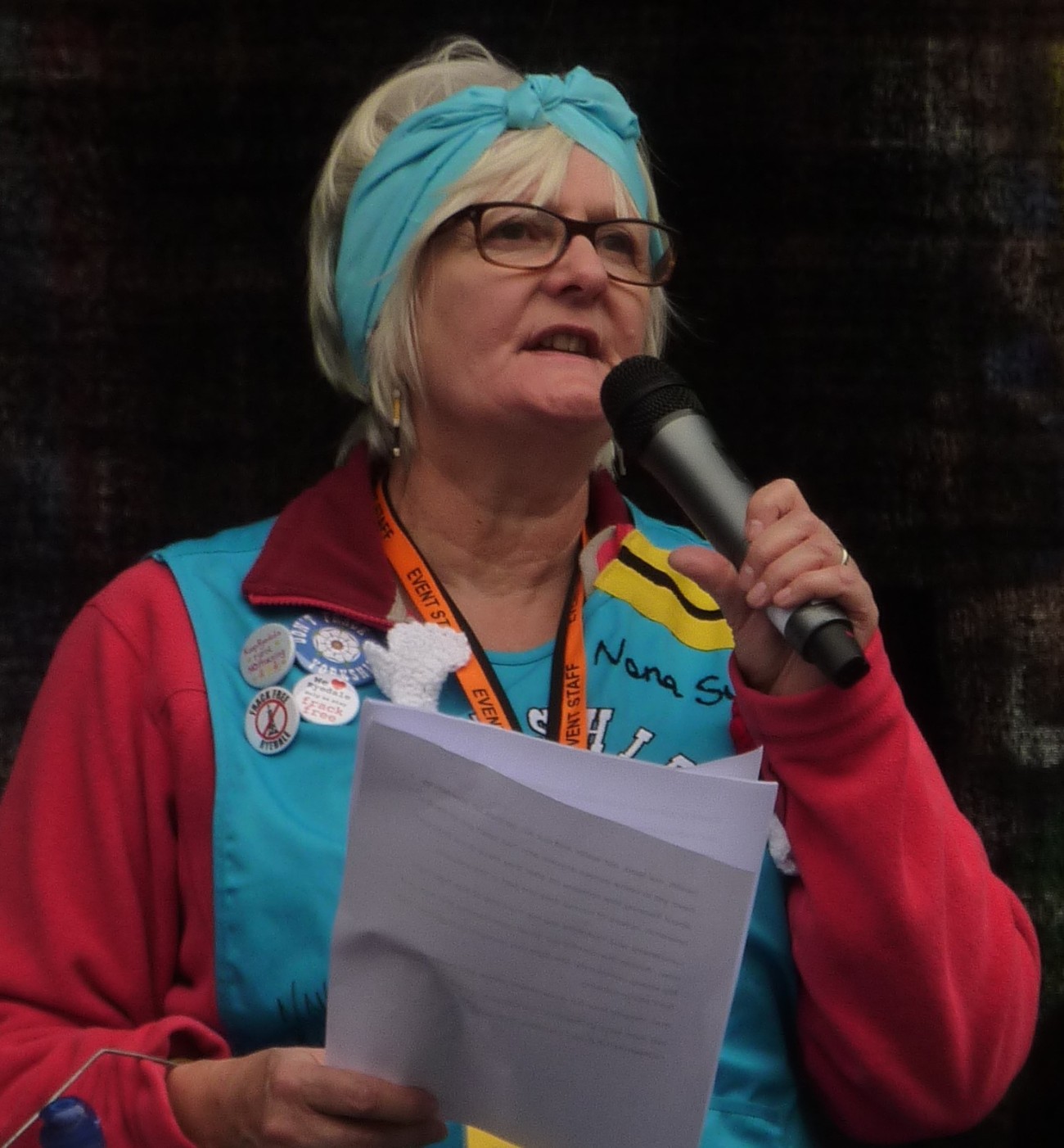 “We have been fighting this for two and a half years. In all that time we have prevented fracking from happening. I would think Third Energy expected to be drilling by now.

For the 4,000 people who commented on Third Energy’s plans [to frack in Ryedale], only about 30 were in favour and not one of them lived in or near Kirby Misperton. This demonstrates there is not social licence for fracking. 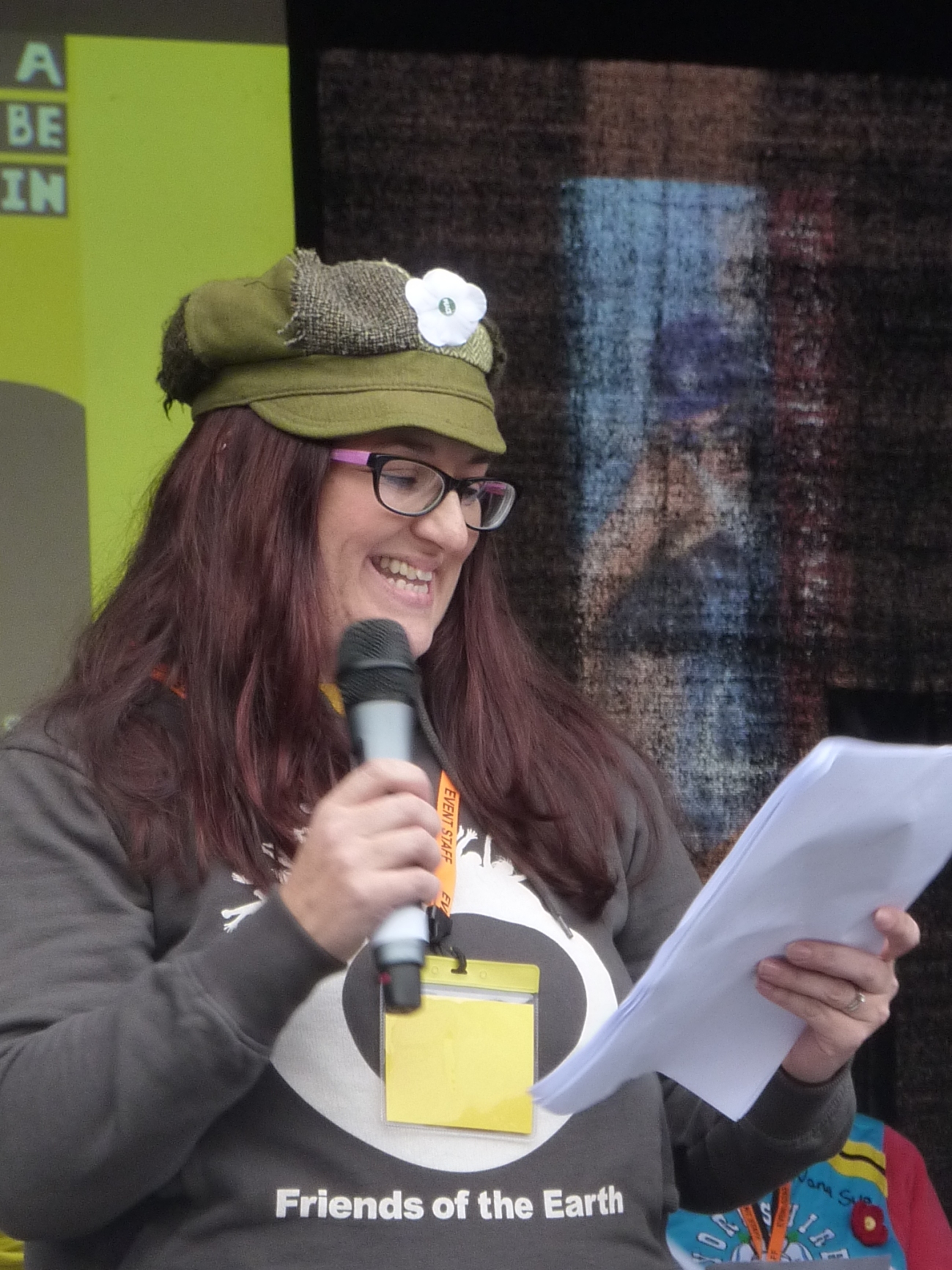 “They picked a fight with the wrong people. Our children matter. Our vulnerable and elderly residents matter.

“We will not give up. We will take this to the highest level.” 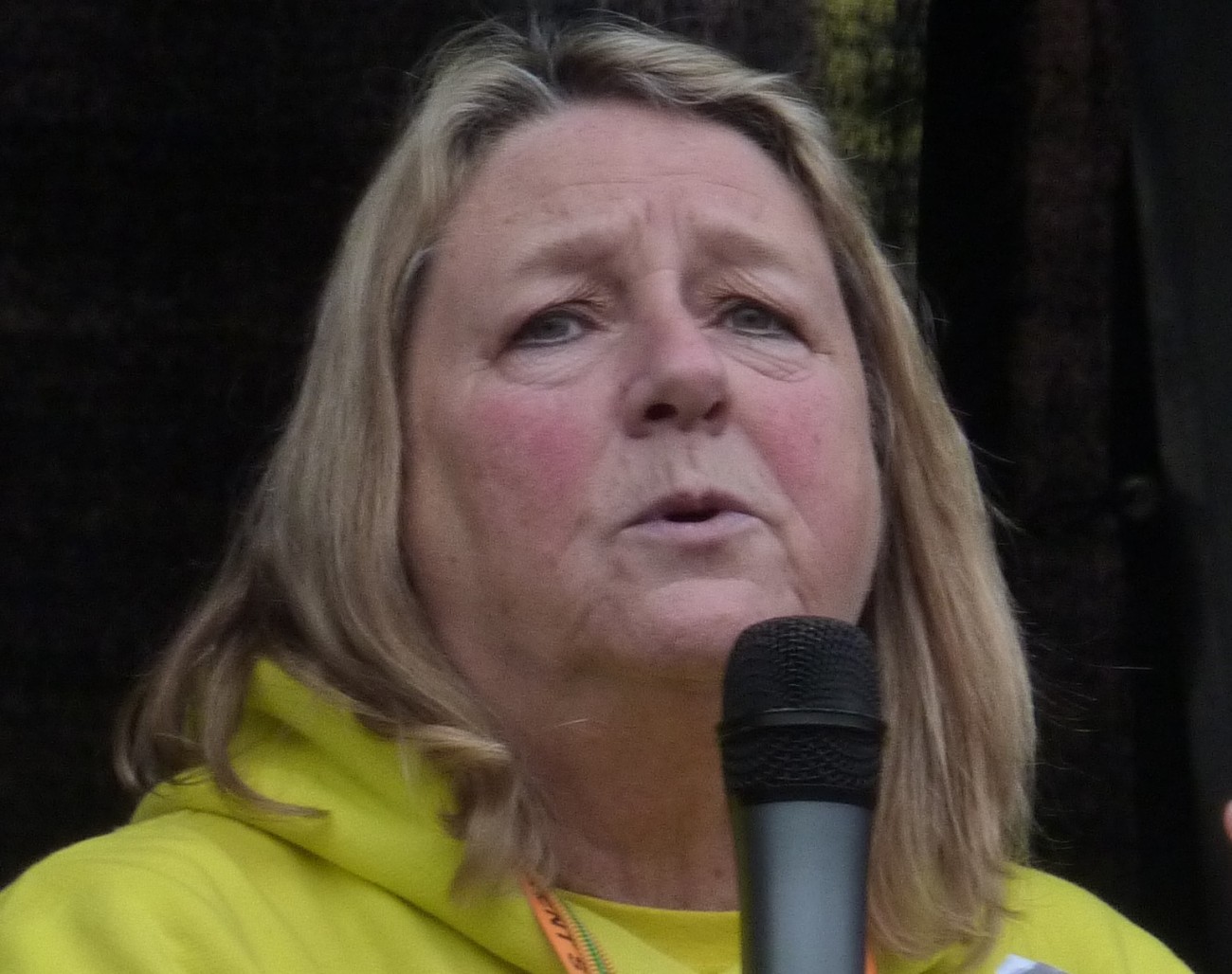 After the decision by the Secretary of State, Sajid Javid, to reopen the inquiry into Cuadrilla’s application to frack at Roseacre Wood, Mrs Richardson said:

“This is no longer just about fracking and the harm it brings to communities, our environment and climate change. This is now about local people having a say in their own future. This is about the people. To quote Theresa May “we will look after the interests of the ordinary working people not the rich and powerful. False words indeed. They only mean it when it suits them.

“People feel so strongly. Ordinary men and women like me, who has never done anything like this before but, we have been forced to action.

“There are many of us put lives in hold and sacrificed so much. Do not underestimate what this costs in money and time and effort.

“We have to be strong and resolute. We will only stop this by working together  and showing the oil and gas industry and our complicit government that we will not be bullied. We will not shut up and go away.

“This is about us the people. We do matter. Never have I seen such strong feeling amongst communities from right across the UK…… no the world.” 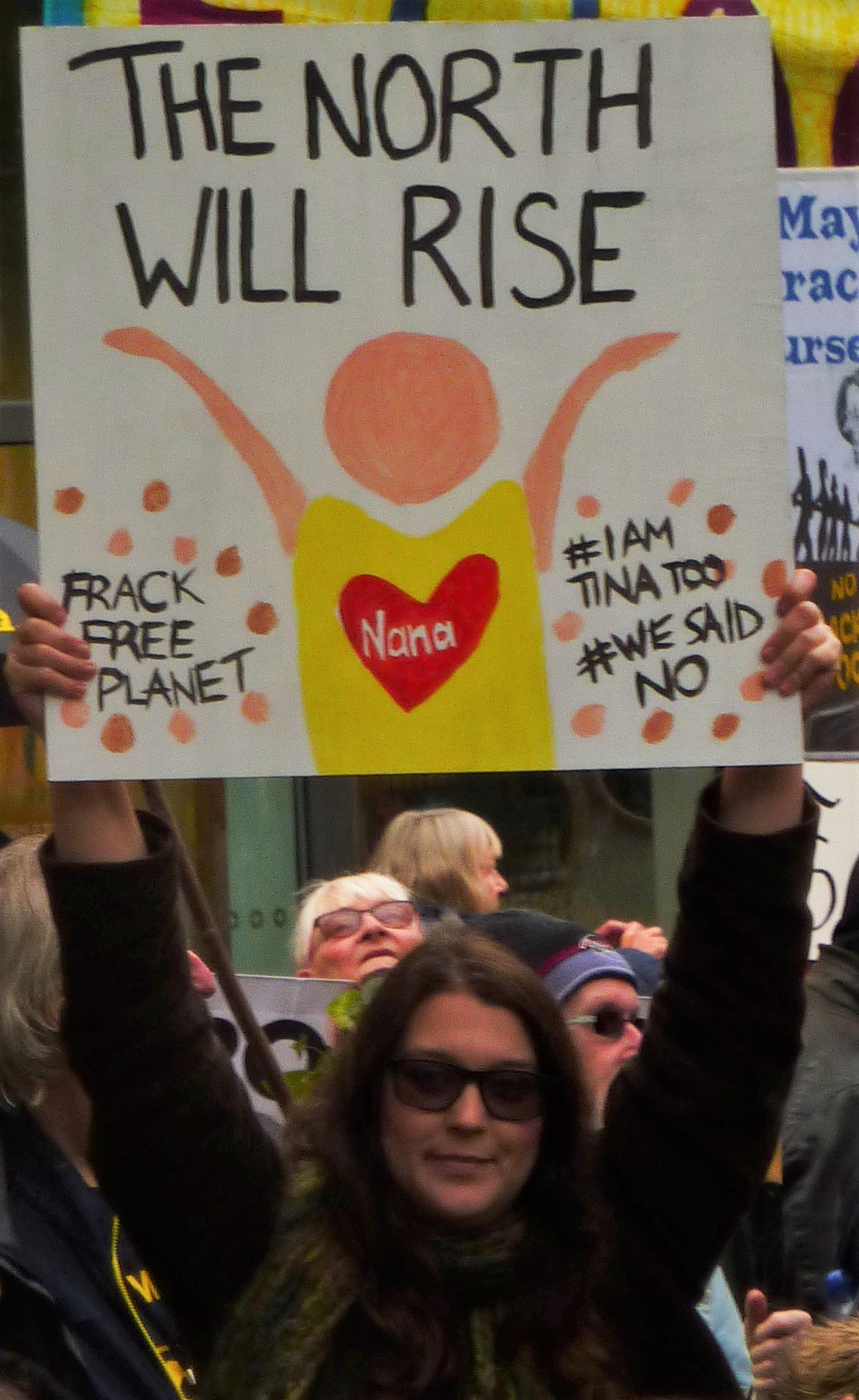 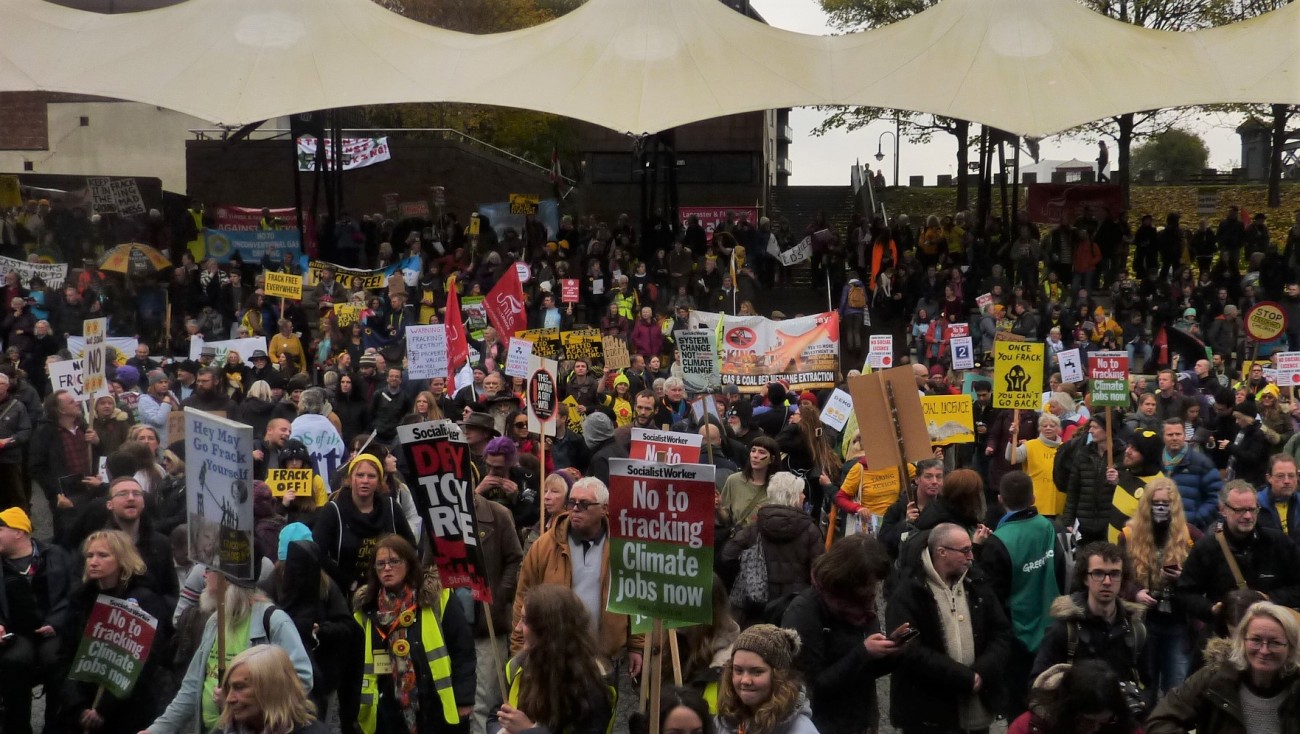 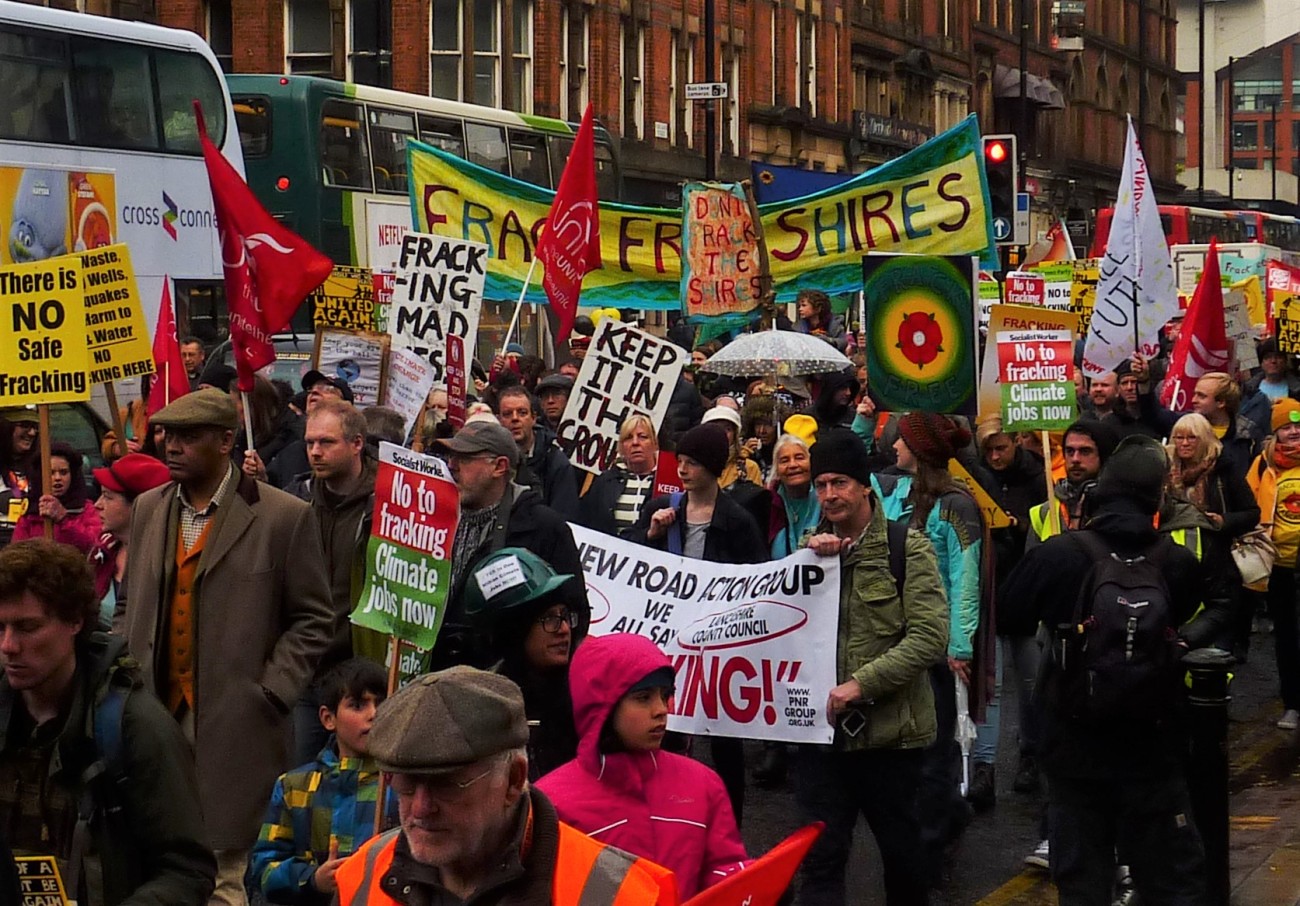 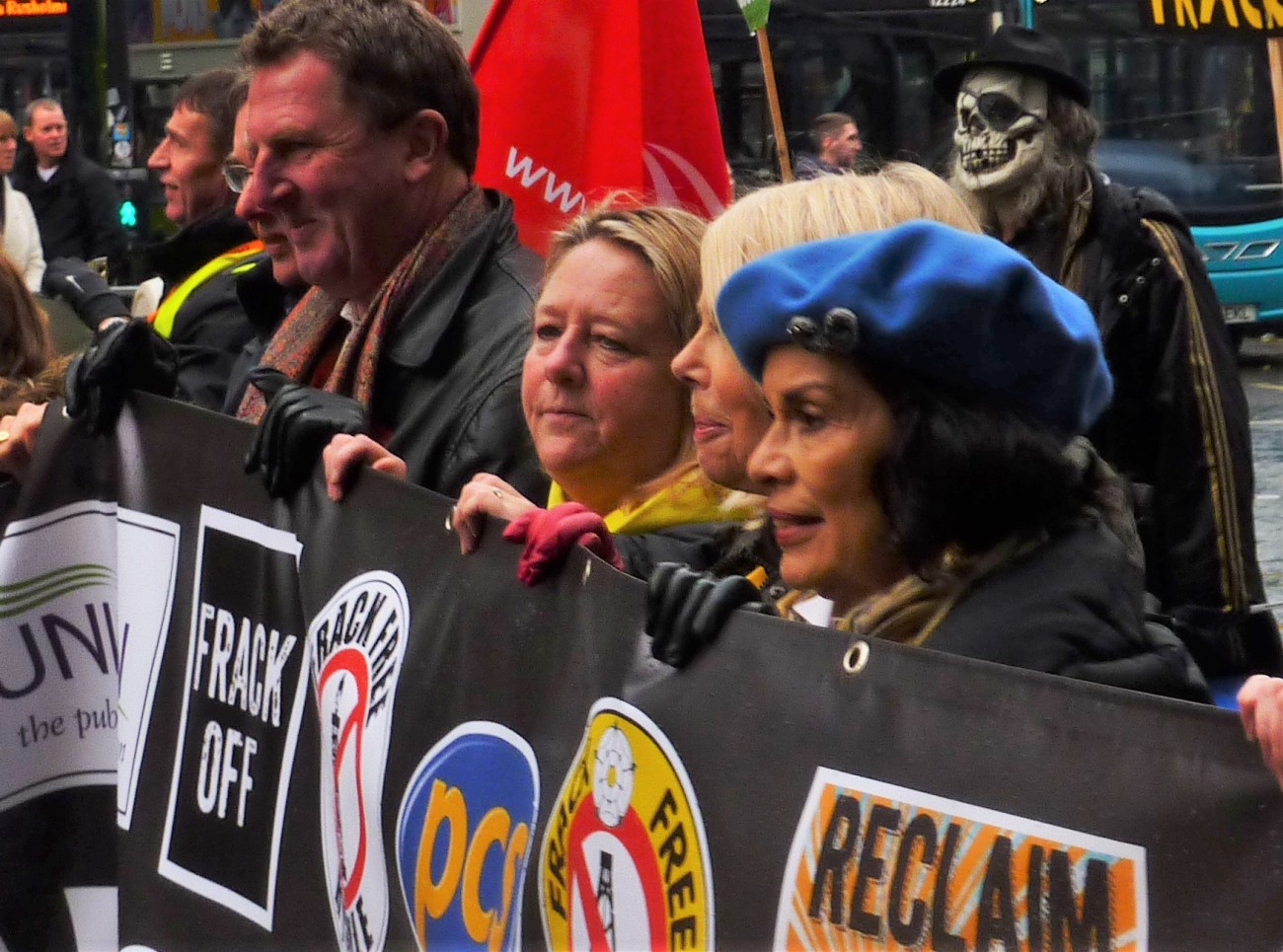 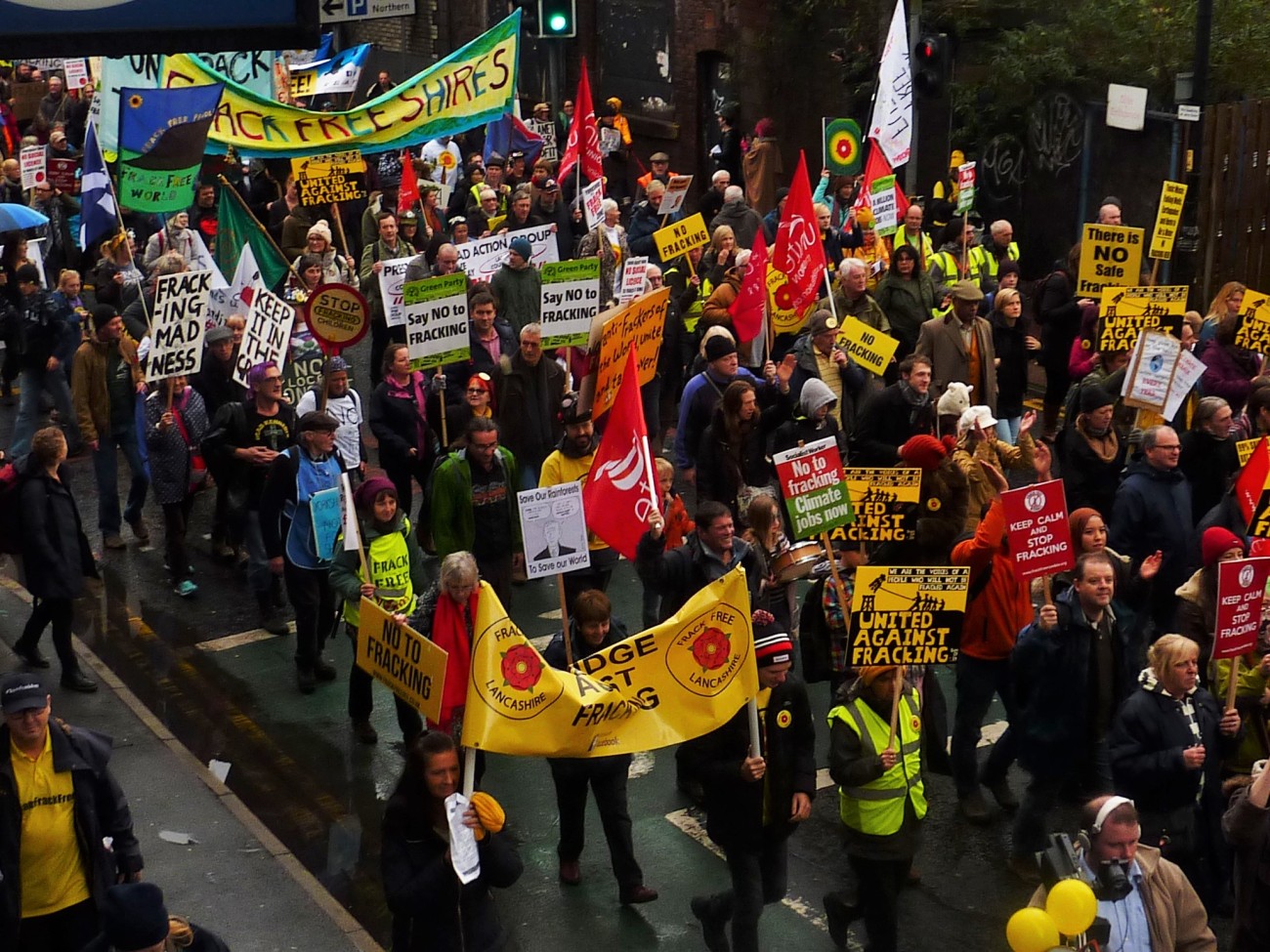 The crowd hears from Kevin Blowe, of Netpol, which is contributing to a new research project on policing of anti-fracking protests. 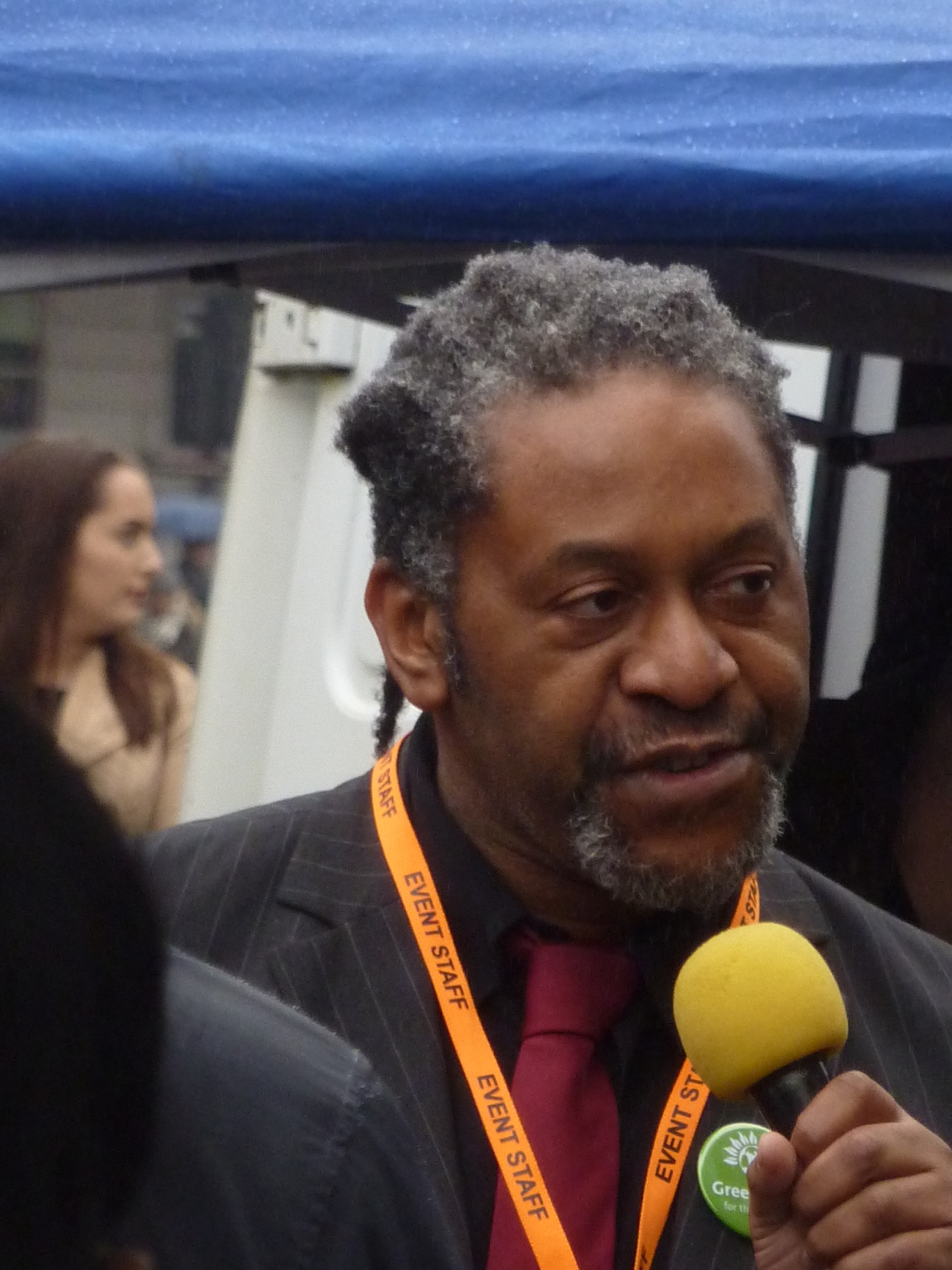 The Green Party candidate for Mayor of Greater Manchester, Deyika Nzeribe (above), called on the anti-fracking movement to give the shale gas industry “the scrutiny it deserved”.

John Hodson, speaking for David McCoy, of the health charity Medact, said the biggest threat to health from shale gas extraction was its contribution to climate change. The crowd also heard from Stephen Garsted, Conor Dwyer of Friends of the Earth and the Climate Jobs initiative. 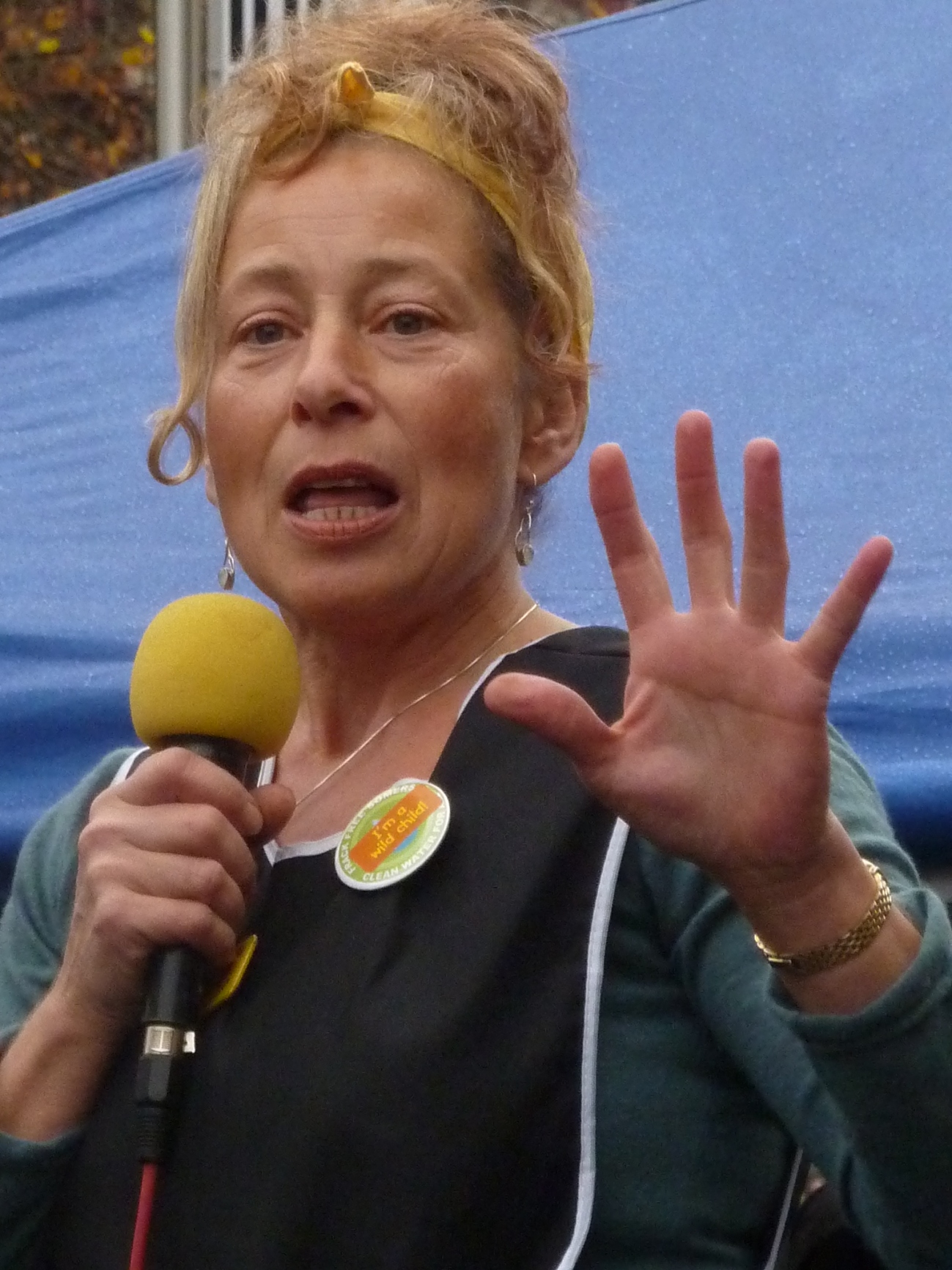 “People have said no to this industry. We can win. We will win. This is what democracy looks like”. 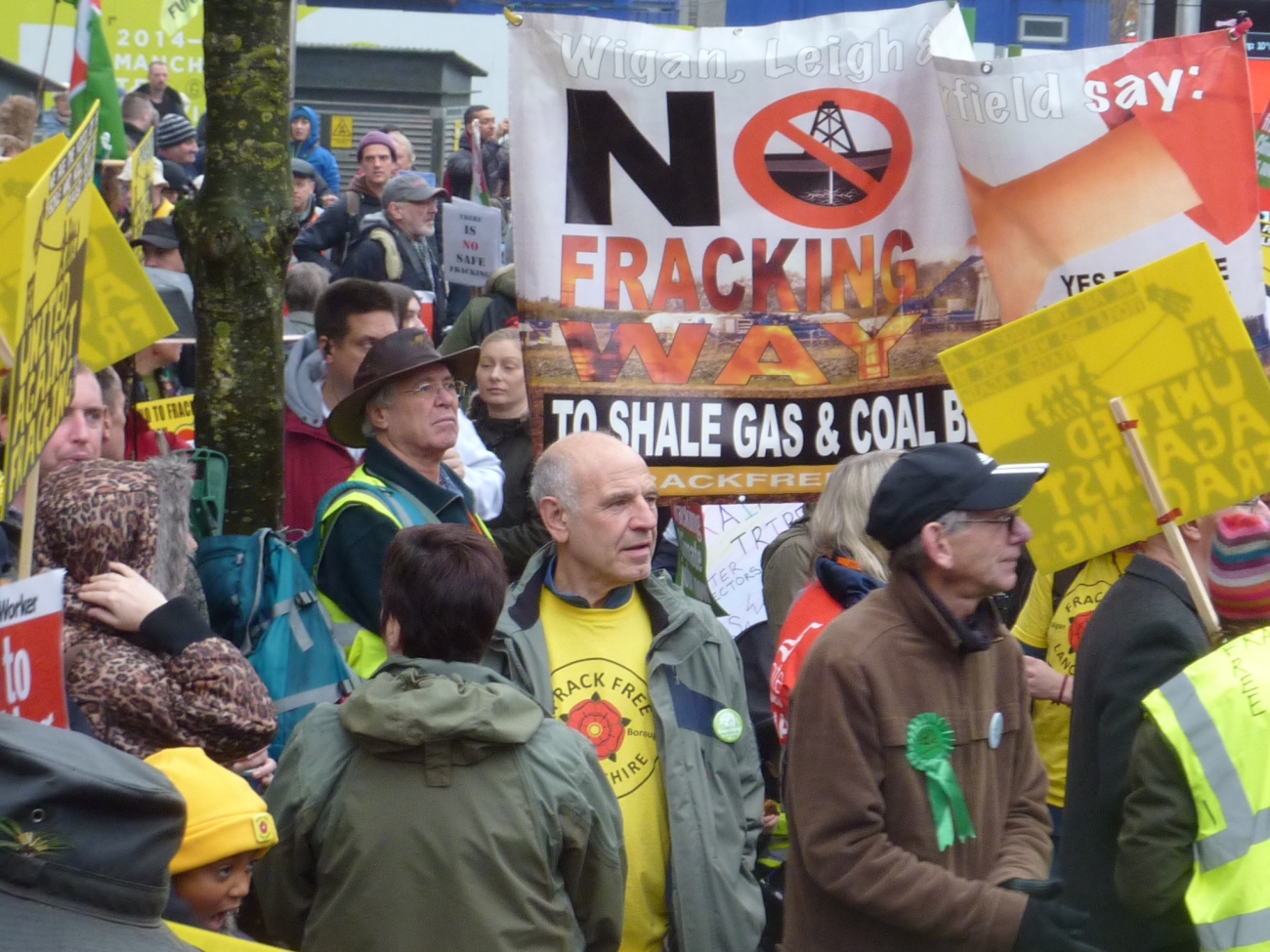