Opponents at Cuadrilla’s Becconsall site, May 2018. Photo: S A Powney

Residents and campaigners who have opposed the site for more than seven years said they were delighted to see the work underway.

“When seeds are sown and there is new growth on the land where the rig was, then we can truly celebrate REAF’s success at having prevented Cuadrilla from fracking at Becconsall.

“Anti-fracking campaigners and opponents around the UK can take heart that a small group of individuals can make a difference in preventing energy companies from having their own way.”

Cuadrilla told residents last month that it would start to plug the well with cement and remove the well head. In a statement the company

“Once these works are complete, our site restoration programme will begin and the site will be restored to its original “greenfield” status. We expect the well work to take approximately one month and the subsequent site restoration to take to take 6-7 weeks in total, weather dependent.” 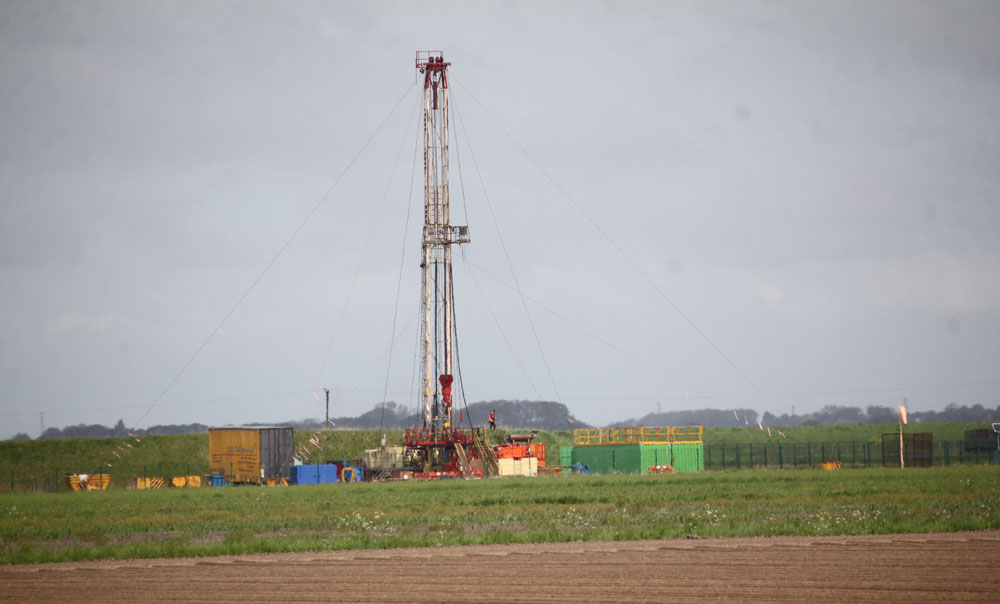 Restoration at Cuadrilla’s Becconsall site, May 2018. Photo: S A Powney

The Becconsall site is 700m from the Ribble Estuary, an internationally-important wildlife reserve that in winter is home to tens of thousands of protected geese and swans.

The original planning permission for the Becconsall well site included restrictions on work during the winter bird season between October and March and a 90-day limit on drilling. Cuadrilla breached both conditions.

The company first applied for permission to drill an exploration well in 2010. The well and a sidetrack were drilled in 2011. The original date for restoration was scheduled for September 2012.

In 2014, the company sought to carry out a mini-frack but later withdrew the application. In 2015, it announced it had no plans to develop the site.

At that time, Cuadrilla’s website promised restoration by October 2016 but the work was not carried out. In 2017, restoration was prevented because Little Ringed Plovers nested on the wellsite. Wildlife legislation prevented the company from disturbing the birds. It said in a statement last month:

“Due to the guidelines around the hatching of the Ringed Plover’s eggs, and the fact that no work is allowed at this site during the wintering bird season which runs from the start of October to the end of March each year, we therefore are starting works as quickly as is feasible after the wintering bird season finished just a couple of weeks ago.”

The restoration deadline was reset by the county council four times.

In 2017, Cuadrilla applied again to extend the planning consent. It asked the county council to agree to restoration by October 2018. But this time councillors voted for enforcement action because they said Cuadrilla had not met the agreed timetable for returning the land to agriculture. 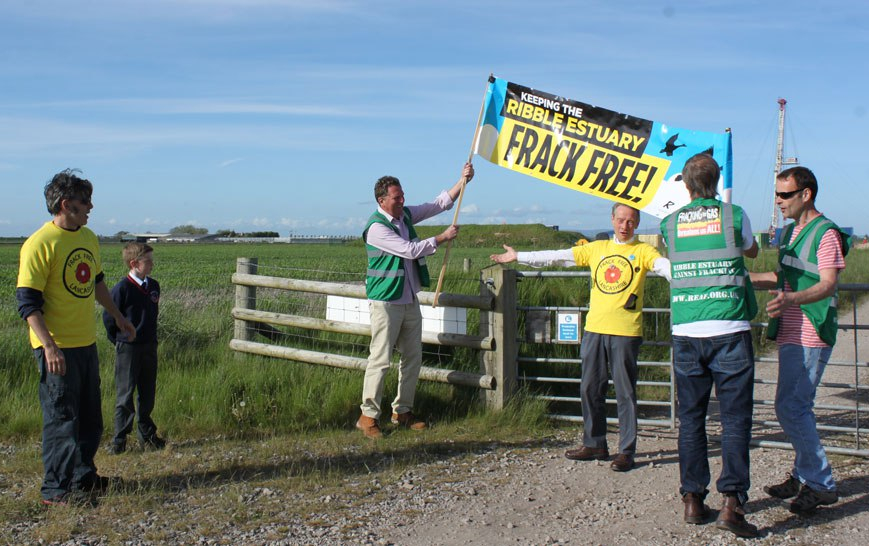 Opponents at Cuadrilla’s Becconsall site, May 2018. Photo: S A Powney

The REAF opposition group said its experiences in the Becconsall campaign were now being used by community groups across the country.

“I could not be more proud to have been part of such a team of amazingly dedicated and selfless people, who have spent many hours over the last eight years working to protect the threat to the wildlife, RAMSAR site and SSSIs.

“REAF are incredibly special people who have chosen to make their home in this part of beautiful West Lancashire and should be commended for their efforts to protect the future well-being of current residents and the next generations in this area from the advances of another dirty fossil fuel industry.

“The work done by REAF has been passed on to the many groups, who have built on and achieved their own steps forward. From a tiny beginning sounds a rising voice, a united action and resounding success.

“Those who are continuing the fight, rest assured that the power of the people is strong. Apathy leads to control and eventually constraint. Stand up, speak up, empower yourselves. We have proved you can finish this, one step at a time”.

“This is a fantastic result for the local community, and is testament to the determination of residents and Ribble Estuary Against Fracking who refused to stand for Cuadrilla’s disregard for their community and the planning system.

“Having broken planning conditions designed to protect wildlife and been granted several extensions to their operations, it will be a relief for local residents that Cuadrilla have finally been forced to restore the site to greenfield.

“This victory will inspire people across the country who are resisting the Government’s attempts to impose fracking on their communities. Cuadrilla’s record at Becconsall should raise warning signs with the Government, who must now refuse consent for fracking at Preston New Road in line with the wishes of the local councils and thousands of local people who all said no to fracking.”

“After 7 years of opposition, REAF are thrilled to finally see the works in progress to plug and abandon the Becconsall site. One for the good guys.”

“HAF would like to congratulate REAF for their relentless attention to monitoring and speaking out against Cuadrilla’s reluctance year upon year to avoid restoring the site at Becconsall.

“Conditions imposed are a vital part of planning control and must not be flouted, otherwise it undermines the whole regulatory process and ultimately fails to protect residents.

“We will most likely find ourselves following in these footsteps at Altcar Moss and the lessons have been well learned from this experience.”