Crown Oil, based in Bury, made its first delivery today to a contractor at the site at Little Plumpton near Blackpool.

But this afternoon, the company posted a statement on its Facebook page saying it would no longer supply the site.

It said it made no comment on “the legitimacy of fracking” or its impact. But it added:

“We care about people and have made the only decision we consider is appropriate”.

In February, Moore’s Readymix Concrete and Armstrong Aggregates announced they would no longer supply the site.

Mark Seddon, a Crown Oil director, confirmed to DrillOrDrop that the Facebook statement was genuine and was made in response to emails and messages to the company’s website. He would not say which contractor his company had been supplying.

“As a business we have considered the representations made and have concluded that in the interests of the community involved we will cease supply to the site in question with immediate effect.”

“It has become apparent from various communications we have received today (6th June 2017) from communities affected by the process of fracking that they oppose Crown Oil supplying a drilling site with fuel.

“Firstly, it should be noted that our supply arrangement is with a contractor and not the fracking company directly and as such until our vehicle arrived on site we were unaware of the exact purpose the fuel would be put to; secondly we have made only a single supply to site.

“As a family owned and run business, we attempt to help local communities either directly via charitable donations or by way of local sponsorship arrangements and we are fully aware of our corporate responsibilities and how our actions can sometimes affect others.”

Opponents of activities at Preston New Road welcomed the statement and thanked the company for its decision. 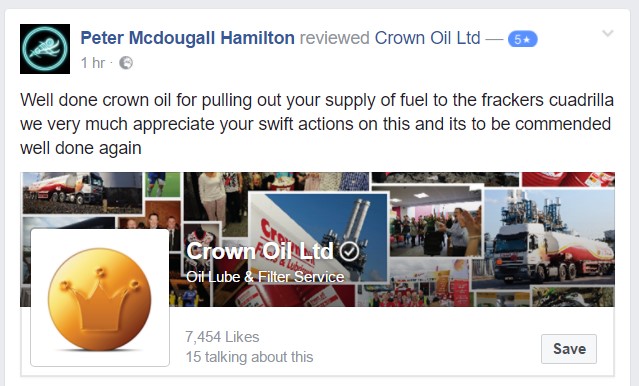 “Thanks. It seems to be a recurring pattern…. contactor s being unaware of their delivery destination…very poor do from Cuadrilla… not very transparent…but hey would we expect anything else?”

“Oh my what a indepth and concisely written statement. Well done to Crown oil Ltd. Much respect to them as these decisions are difficult to reach in times of austerity.”

A spokesperson for Cuadrilla confirmed that that Crown Oil was supplying a contractor and made one delivery to the Preston New Road site.

“Our operations are not impacted by their decision.”