The West Sussex couple joined campaigners opposed to the extension of planning permission for a year at the Broadford Bridge oil exploration site.

They handed the postcard to Lee Harris (pictured right, below), the council’s executive director of economy, infrastructure and environment outside county hall in Chichester.

The site operator, Kimmeridge Oil and Gas Ltd (KOGL), drilled an exploration well in May this year.

KOGL now wants to wants to vary a condition of the 2013 planning permission which said the site must be restored within three years of the start of work.

Operations at Broadford Bridge began on 15 September 2014, which puts the deadline for restoration, under the current planning permission, at just over one month’s time. The company has said it needs more time to test the flow of oil in the well and has applied for an extra year.

The company has argued that its plans would not “give rise to any new or additional significant adverse effects beyond those already considered within the ES [Environmental Statement submitted with the previous 2013 permission]”. 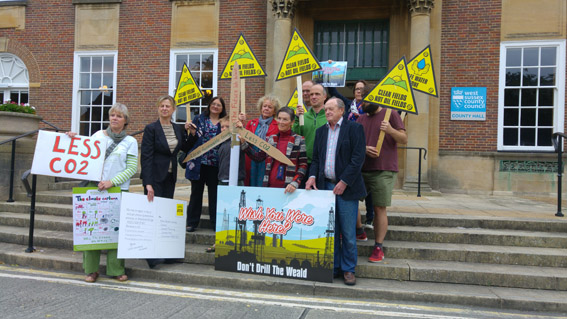 But opponents of work at Broadford Bridge have said the previous permission is out-of-date and that KOGL should submit a completely new application. The company has been exploring for oil in the Kimmeridge limestone, while the previous application, by a past operator, was concerned with gas in sandstone.

Opponents have also said KOGL does not need another year at Broadford Bridge and they have criticised plans to use acid to stimulate oil flow, raising concerns about risks to groundwater and local wildlife.

Sue Jameson, who along with James Bolam, has been campaigning against the onshore oil and gas industry for five years, said she was concerned about flaws in the company’s applications and statements that were “not strictly true”.

“These are small things but they are indicative that the industry bends the truth to meet its needs.

“We are concerned about the potential industrialisation of the Weald and the effect on the environment and wildlife.

“The company has already said it needs to drill back-to-back wells to make the industry financially viable.

“I don’t want my grandchildren to live in an area where water or air may be polluted.

“We don’t need fossil fuels. It is a fantasy that they are an interim solution.”

“You only need to look at the web at sites in Pennsylvania and Texas to see the massive amount of destruction. It is not just one or two wells – it is hundreds.

“This is a beautiful green and pleasant land and we want to keep it so.”

He said more people knew about the onshore oil and gas industry than when he first started campaigning. But he said many people did not know about what was planned in the Weald.

The group also included nine-year-old Adam Cort, who displayed his poster, which won an award in March from WWF.

“Why are we drilling for oil and gas? We have committed to the Paris agreement to reduce our greenhouse gas emissions but we seem to be investing only in nuclear and oil and gas.

“We should be supporting the green economy. We are we not investing in renewables?”