Live updates from Surrey County Council’s planning committee to discuss a Traffic Management Plan and security fencing for Europa’s oil exploration site at Bury Hill Wood, near Leith Hill. This report has been made possible by individual donations to DrillOrDrop

This is the second time the committee has discussed the traffic management plan, which is a condition of planning permission granted by an inspector in August 2015 (Previous meeting).

The meeting at County Hall in Kingston is also discussing an application for the site for 2m high security fencing and 3m high deer fencing, as well office and welfare accommodation, water and fuel stores, and a generator.

Share price for Europa, operators of the site, fall on news of decision

The committee votes to defer the traffic management plan. A motion to refuse is defeated. Applause from the public gallery.

The committee asks for a designated area for HGVs at Cobham Services on the M25 and a wider area to be covered by the traffic management scheme. This area is to include the M25 junction.

Caroline Smith, the planning development manager, says a deferral could result in an appeal on non-determination. She says:

“I would advice against refusal”

She says Europa has given information and many of the issues being discussed were outside the remit of the committee and in the control of the applicant.

Cllr Mallett says a refusal will not be supported on appeal because there are no technical reasons to defer.

Cllr Edward Hawkins proposes a deferral for more information on the area covered by the traffic management plan, a designated holding area at the service area on the M25.

Cllr Hall suggests the inclusion of  a requirement that Europa begins to communicate with local people. 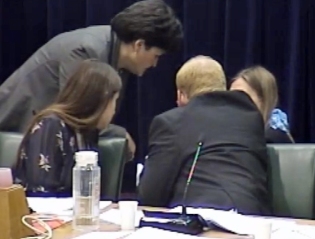 Cllr Hawkins says the decision on the plan should be deferred. He asks for a traffic impact assessment beyond the site.

Cllr Cooksey says it is the committee’s responsibility to ensure that the traffic management plan works for the local residents.

“There are a whole number of issues that members are not happy with.”

There is no means by which the committee has been convinced by the impact on Dorking town centre. It doesn’t take a great deal of traffic changes to totally screw up the system.

He says delays at the Deepdene roundabout and the junction with Coldharbour will snarl up traffic in the town centre.

He says he is not convinced by the accuracy of HGV movements and transit times. We need much more accurate information.

We haven’t been told about communication systems, he says.

We need to reject this plan and to ask for a revised plan to come forward to address tthe issues that the committee is concerned about, rather than a deferral.

Applause from the public gallery.

Ms Murphy says a computer programme had been developed to establish whether the drilling rig could navigate Coldharbour Lane.

Cllr Jeff Harris says he wants to know what happens when a heavy goods vehicle meets a car.

Caroline Smith, planning development manager, says there won’t be any other vehicles coming in the opposite direction to the drilling rig.

She says the police were originally consulted and the plan had not changed sufficiently to result in a different view.

Cllr Harris asks whether the police have been consulted on the new motorway holding area.

Caroline Smith says if vehicles won’t make the journey if they are out of time. Cllr Harris says drivers will try to make up time if they have not delivered at the end of a day. It is unworkable he says.

Cllr Bermie Muir says the timings have been questionable – if the company keeps failing to make deliveries then the scheme will take longer than the required 18 weeks.

Caroline Smith says permission is for 18 weeks. If Europa can’t do the work in 18 weeks then it will have to come back for a new permission.

Committee chair, Cllr Hall, says there are lots of questions, many of which are dealt with by the officer’s report.

I don’t think Europa or their consultants, Barton Wilmore, come out of this well particularly. They are not particularly cooperative or helpful.

If someone asked me whether I would recommend Barton Wilmore, I would say Bell Pottinger might be better.

He says Europa has failed to communicate with  residents on Coldhabour Lane or consider the concerns they have.

“Europa don’t appear to have enacted what they should have done. Just pulling up the shutters is not particularly helpful.”

Cllr Hall also questions the references to the town centre in the traffic management plan.

Cllr Harris says there are still gaps in the traffic management plan. 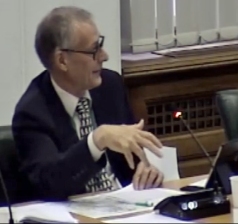 Cllr Muir asks whether the traffic management plan now needs to depend on the vagaries of the M25 now that the holding area is to be on the motorway, rather than Rykas Cafe. 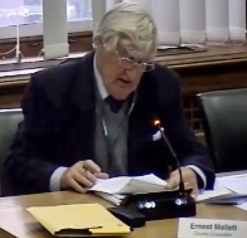 Cllr Mallett says he supports comments made by Cllr Taylor.

The whole of Surrey use oil, he says. This has been going on all the time in the Green Belt. It is essential to western type of living. We are dealing with an oil and gas type situation which makes a major contribution to the economy.

“Pollution”, says someone from the public.

“There is no choice where this can be carried out. It cannot be moved to an industrial estate.”

“The devil is in the detail”, says someone from the public gallery

The HGV count is now lower than it  had been and the Mole Valley objections were either irrelevant or would have been dealt with by the inspector, Cllr Mallett says.

When we are dealing with this kind of application, nobody is going to claim there is not going to be an affect on the surrounding area and surrounding time.

How much are we prepared to accept as reasonable to allow western type of life to go on? He asks if the reasons for deferral have not been satisfied then the traffic management plan conditions have been refused.

“As far as I am concerned they have been satisfied.”

I have lived in Dorking for 50 years and they haven’t says someone from the public gallery.

Cllr Taylor, the committee deputy chair, says the application has been approved by a public inquiry. There has been no further legal challenge against the inspector’s decision. The role of the committee is to consider the conditions on the permission.

“If we are seen to act in an irresponsible way we are leaving ourselves open to costs. It is not a happy situation but it is the reality.”

We cannot revisit issues already dealt with by the planning inspector, he says.

He disputes that Coldharbour Lane on the proposed traffic route is unique in Surrey. There are others routes that are narrower and more constrained than the lane.

“All sorts of developments have taken place in the Surrey Hills where large vehicles have driven up sunken lanes.”

No they haven’t, says a member of the public gallery.

“I don’t think this has ever been a major factor. This is business as always in the Surrey Hills.”

No it isn’t, people say from the public gallery.

Cllr Taylor says the plan was not deferred from the last meeting to secure a 3D representation of the route. The committee should not be addressing this issue.

Cllr Cooksey, a member of the committee, says the plans have been referred back for four reasons:

He says Mole Valley has come to the conclusion that the plan is wholly inadequate for dealing with traffic in Dorking town centre.

“I am very concerned this has not been addressed.”

He says the number of HGVs in the plan and the estimated transit times are unrealistic he says to anyone who knows the area.

He welcomes the aluminium trackways to reduce the number of lorries in the site preparation phase. But he says this will not affect the number of vehicles in the drilling phase.

He questions whether a man with a stop/go board can control three or four-way traffic at a junction.

We also need detail about the communication system, he adds.

Cllr Cooksey says Rykas Cafe, which had been proposed as a holding area for lorries, had never been consulted by the applicant.

Members of the public gallery applaud and say “here, here” 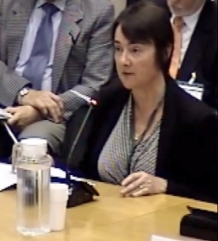 Cllr Watson, who represents the area of the site, asks for permission to speak to the meeting. Cllr Hall, the committee chair, says technically she is not allowed to speak again.

There are shouts from the public gallery of

Cllr Hall said he was happy to let her speak on issues that had moved on. There is applause from the public gallery.

She says the long convoys will “effectively close the road”, of Coldharbour Lane. The estimate time of travel along the route to the site is “unrealistic, she says.

Given the bends and steep gradient it would be unsafe for vehicles to overtake a convoy, she says.

The instruction for lorries to stop if they see a cyclists is impossible, given blind bends and gradient, she adds. “This is unsafe and unworkable”.

The absence of a 3D representation of the route is a major omission, she says. Heavy goods vehicles could get stuck on Coldharbour Lane, she adds.

“I ask the committee to vote against the traffic management plan.”

Cllr Harris said the 3D imaging that had been requested had not been submitted. He said he was “slightly disappointed” this wasn’t present.

He said there was also no submission from Surrey Police – this would be a difficult site to police, he said.

10.33am
Chair says there will be no public speaking

Cllr Tim Hall says the meeting is “returning after tea” in cricketing terms because the traffic management plan had been deferred from a previous meeting in August.

10.20am
Councillors gathering for the committee

Opponents of Europa’s plans have been protesting outside the meeting.  They say they’ve been refused permission to speak to the committee on the traffic management plan. More details in DrillOrDrop report here