This post will be updated throughout the week. Please let us know (click here) about events which you think should be included.

“Fracking for gas is a filthy industry, polluting water, air and countryside and producing a fossil fuel which will make climate change worse and which we do not need.

“We protested against drilling for shale gas at Barton Moss in Salford, and now Frack Free Greater Manchester are supporting the campaign to stop fracking at Preston New Road near Blackpool.

“Trade unionists joined our rally to put the case for thousands of good, sustainable jobs in renewable energy, building insulation and public transport instead of the few jobs for local people in fracking.

“Wales, Scotland and Ireland have banned fracking, and we can force our government to do the same in England.”

The co-leader of the Green Party, Jonathan Bartley, was dragged by police away from the entrance to Third Energy’s fracking site at Kirby Misperton. DrillOrDrop report

A man climbed onto a lorry going into Third Energy’s Kirby Misperton site at about 1.50pm. North Yorkshire Police said he was brought down and arrested at about 5.40pm. He was later charged with hindering someone carrying out their lawful business and obstructing a police officer. Another man, who held on to the lorry at about the same time, was charged with getting onto a motor vehicle, the police said.

North Yorkshire Police reported there had been two slow walk protests outside Third Energy’s Kirby Misperton fracking site. They were at 10.50am and 1.25pm, both of about 20 minutes, the force said.

‘’When we come to the gates to protest we are empowered. It means we haven’t given up the fight and retreated to our warm front rooms. It means we still believe we can win.”

He called on farmers and landowners to deny fracking companies access to their land.

“We must refuse INEOS, IGAS, Cuadrilla and Third Energy access to our land. As farmers and landowners, this may be the single most important thing we can do. We need to talk to our neighbours and work together to ensure that every inch of this beautiful land is as difficult for them to access as possible.”

North Yorkshire Police said it allowed 10 people to walk in front of a lorry on Habton Road, delivering to Third Energy’s fracking site at Kirby Misperton. The protest at 2.05pm, delayed the delivery for about 20 minutes, the police said.

Members of the Kirby Misperton Protection Camp attempted a slow walk of rig staff on their way to Third Energy’s fracking site at about 6.45am. North Yorkshire Police have facilitated this form of protest at times at Kirby Misperton.

Michelle Easton, of the protection camp, said two vehicles did not stop. A pick up truck used by the NSSL security firm. She said security staff pushed people out of the way and into road-side ditches. Third Energy said the incident had been reported to police. The protection camp said it was preparing a complaint to North Yorkshire Police. It was alleged that two officers failed to stop the security guards during the later part of the incident. The North Yorkshire Force said it was investigating the incident. Videos posted by Michelle Easton 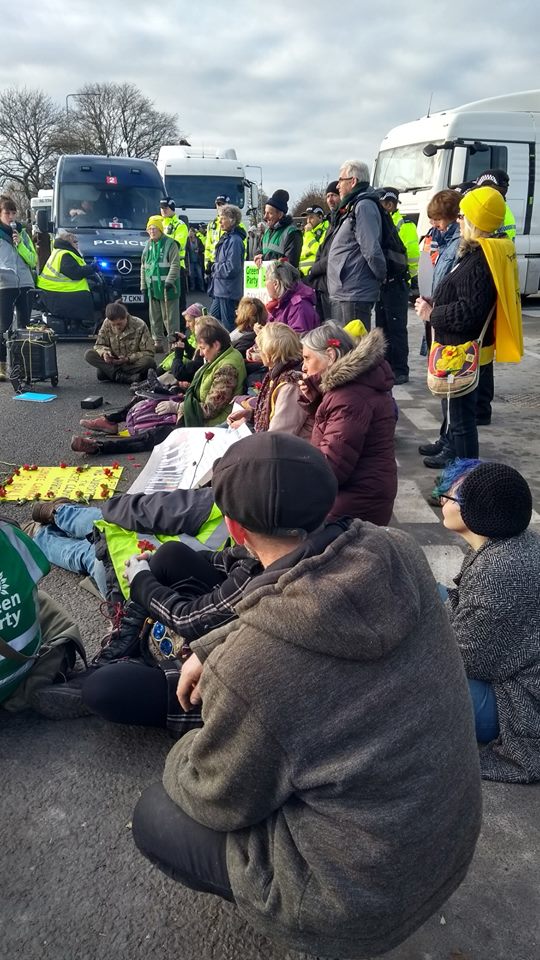 Opponents of Cuadrilla’s shale gas site at Preston New Road near Blackpool took part in a sit-down protest to block access to the site. A campaigner also climbed on top of a tanker outside the entrance.

Two women chained themselves to railings at Pickering Conservative offices in a Suffragette-style protest against Third Energy’s fracking plans in North Yorkshire. They were later joined by other local women in a protest outside the town’s Barclays branch. The bank owns 97% of Third Energy. DrillOrDrop report

Charter of the Forest and Fracking 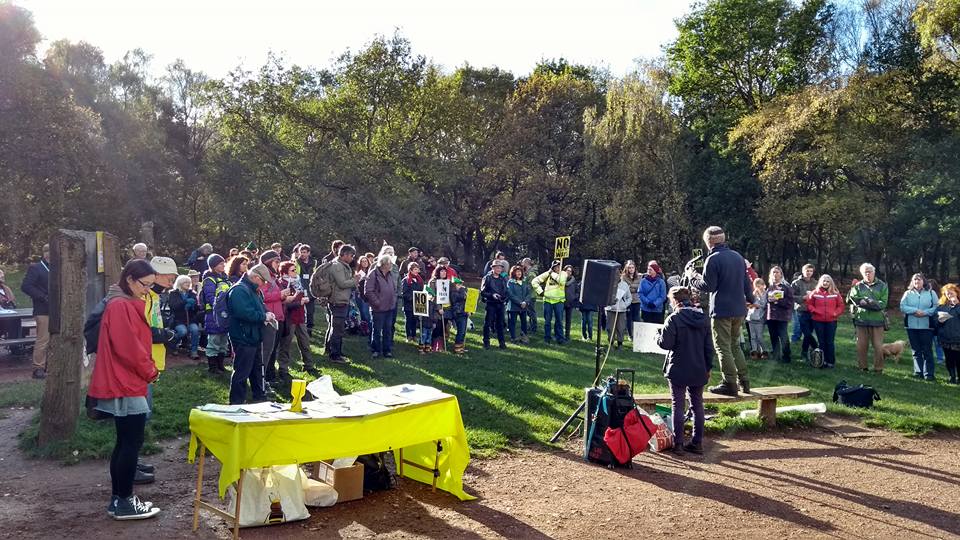 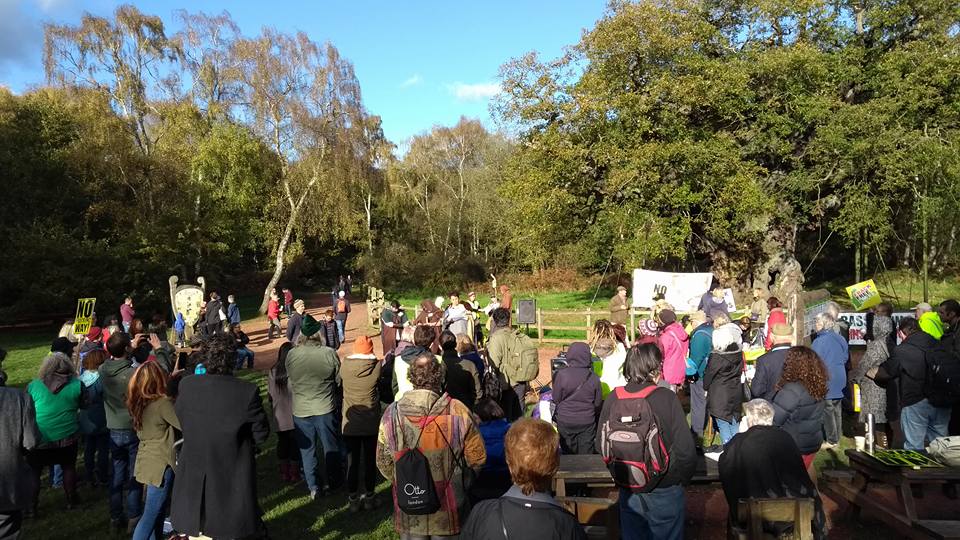 Dozens of opponents of shale gas gathered at the Major Oak in Sherwood Forest to voice concerns about drilling and fracking in the area. The event, organised by Friends of the Earth and Frack Free Nottingham, marked the 800th anniversary of the Charter of the Forest, which re-established the rights of ordinary people to use the land for their own purposes, such as grazing and gathering food and wood.

Several hundred trades unionists took part in a march through Kirby Misperton in protest at Third Energy’s plans to frack in the North Yorkshire village.

The march, organised by the United union, attracted people from across the north of England.

Volunteers protesting against fracking are found not guilty

10 Greenpeace volunteers who took part in a lock-on protest outside Cuadrilla’s shale gas site near Blackpool were acquitted at the end of a trial this week. DrillOrDrop report

North Yorkshire Police said it facilitated a slow walk protest at Kirby Misperton when a group of campaigners walked in front of a delivery lorry at about 12.55pm.

“We need to balance the rights, needs and wishes of everyone at the site, including those who want to assemble and protest safely and peacefully.

“Every day, officers will engage with the protest community, explaining clearly what is acceptable in terms of safety and reasonableness, and what action will be taken if necessary.”

Anti-fracking campaigner, Joe Corre, began his three-day challenge in the High Court to the INEOS injunction against fracking protests. The court also heard from a second challenger, Joe Boyd. DrillOrDrop reports. Judgement in the case was deferred and is expected within the next few weeks.

Opponents of Third Energy’s plans to frack a well in North Yorkshire blocked the road either side of the site entrance early this morning with wooden platforms. DrillOrDrop report