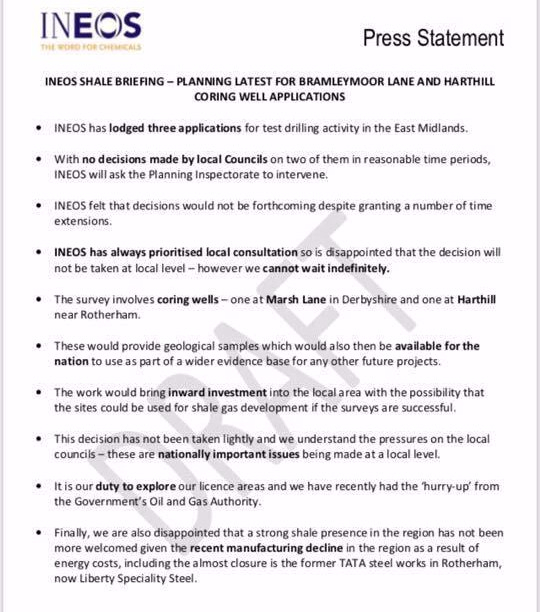 A draft press statement suggests the UK’s biggest shale gas company is looking to remove the decision on its first exploration applications from local councils.

The document, apparently from INEOS Shale, says the company wants a government-appointed planning inspector to make the decision on two schemes in the East Midlands.

INEOS has submitted planning applications for exploration wells at Bramelymoor Lane in the village of Marsh Lane in North East Derbyshire and at Harthill and Woodsetts in Rotherham borough.

The document, circulating on social media tonight, said INEOS was asking the Planning Inspectorate to intervene on Marsh Lane and Harthill because the company said no decision had been made by the local councils “in reasonable time periods.”

The Derbyshire Times published what it called an exclusive just over an hour ago which backs up the material in the briefing document. Many of the words in the paper’s story match the draft press release.

The news comes a day after a High Court judge ruled in favour of INEOS’s injunction against anti-fracking protests. DrillOrDrop report

“INEOS felt that decisions would not be forthcoming despite granting a number of time extensions.

“INEOS has always prioritised local consultation so is disappointed that the decision will not be taken at local level – however we cannot wait indefinitely.”

“The decision has not been taken lightly and we understand the pressure on the local councils – these are nationally important issues being made at a local level.” 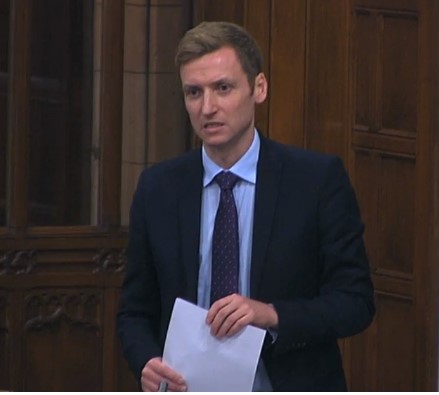 On Wednesday, the Conservative MP for North East Derbyshire, Lee Rowley, told a parliamentary debate that 80,000 had signed a petition against the Marsh Lane scheme and 5,000 people had objected. DrillOrDrop report 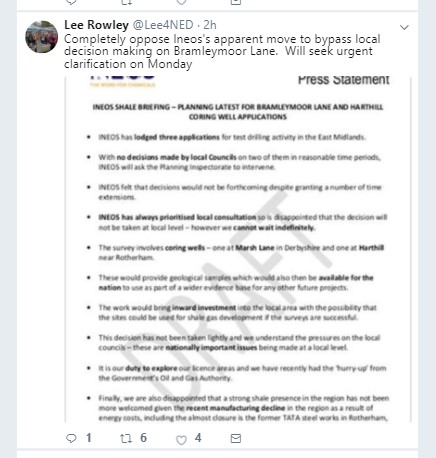 The press statement said the exploration wells would “bring investment into the local area with the possibility that the sites could be used for shale gas development if the surveys are successful.”

“It is our duty to explore our licence areas and we have recently had the “hurry-up” from the Government’s Oil and Gas Authority.”

“We are also disappointed that a strong shale presence in the region has not been more welcomed given the recent manufacturing decline in the region as a result of energy costs, including the almost closure is [sic] the former TATA steel works in Rotherham, now Liberty Speciality Steel.”

According to The Derbyshire Times, Derbyshire County Council said it would continue its work to assess whether Bramleymoor Lane application was a suitable development for the location proposed.

On 13August 2015, the then Energy and Communities Secretaries, Amber Rudd and Greg Clark, issued a joint statement on shale gas. It said the Communities Secretary would actively consider calling in shale gas planning decisions (taking them out of the hands local councils). The Communities would also consider whether to decide an application made to local authority which repeatedly failed to determine oil and gas applications within statutory time frames.