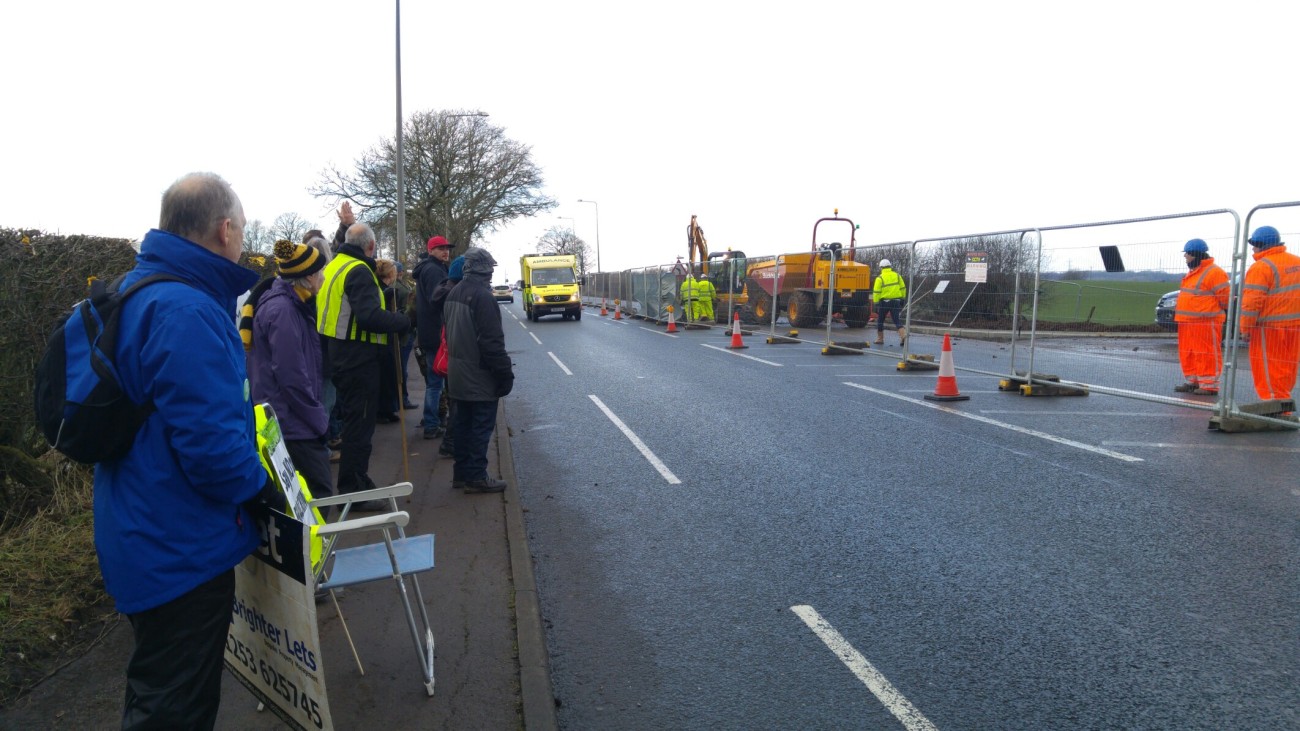 Evidence about 999 ambulance calls, used to support overnight deliveries to Cuadrilla’s fracking site in Lancashire, was unauthorised and not supported by official data from the ambulance service.

The information came in an email presented by Lancashire County Council officers to a meeting yesterday at which Cuadrilla’s proposals for 24-hour deliveries were narrowly approved. DrillOrDrop report

The email was among late submissions to the development control committee and summarised in a separate update sheet distributed before the item was discussed.

The writer, Graham Curry, a now-retired ambulance manager, said there had been two occasions on which 999 ambulances had been forced to divert onto the M55 because of protests outside the site on Preston New Road.

But North West Ambulance has confirmed it has no records of detailed statistics about the impact of the protests on its service.

The Trust confirmed that Mr Curry had no authorisation to provide this account. Mr Curry had also not recorded the email, as North West Ambulance Service required.

At yesterday’s meeting, Cuadrilla argued that overnight deliveries to Preston New Road were needed because the site had been targeted by anti-fracking protesters. Several local residents argued that protests were no longer closing the road and that the change was unjustified.

“During the month of July 2017, there was a number of occasions where ambulances responding to emergency calls were unable to get to their destination using the fastest possible route due to incidents outside of the Preston New Road site. On such occasions, the ambulance returned to the M55 and used Junction 3 to arrive at their destination.”

The council’s planning officer, Jonathan Haine, referred to Mr Curry’s email as the source of this information. David Foxcroft, a Conservative councillor on the committee, asked for the email to be read in full to the committee. 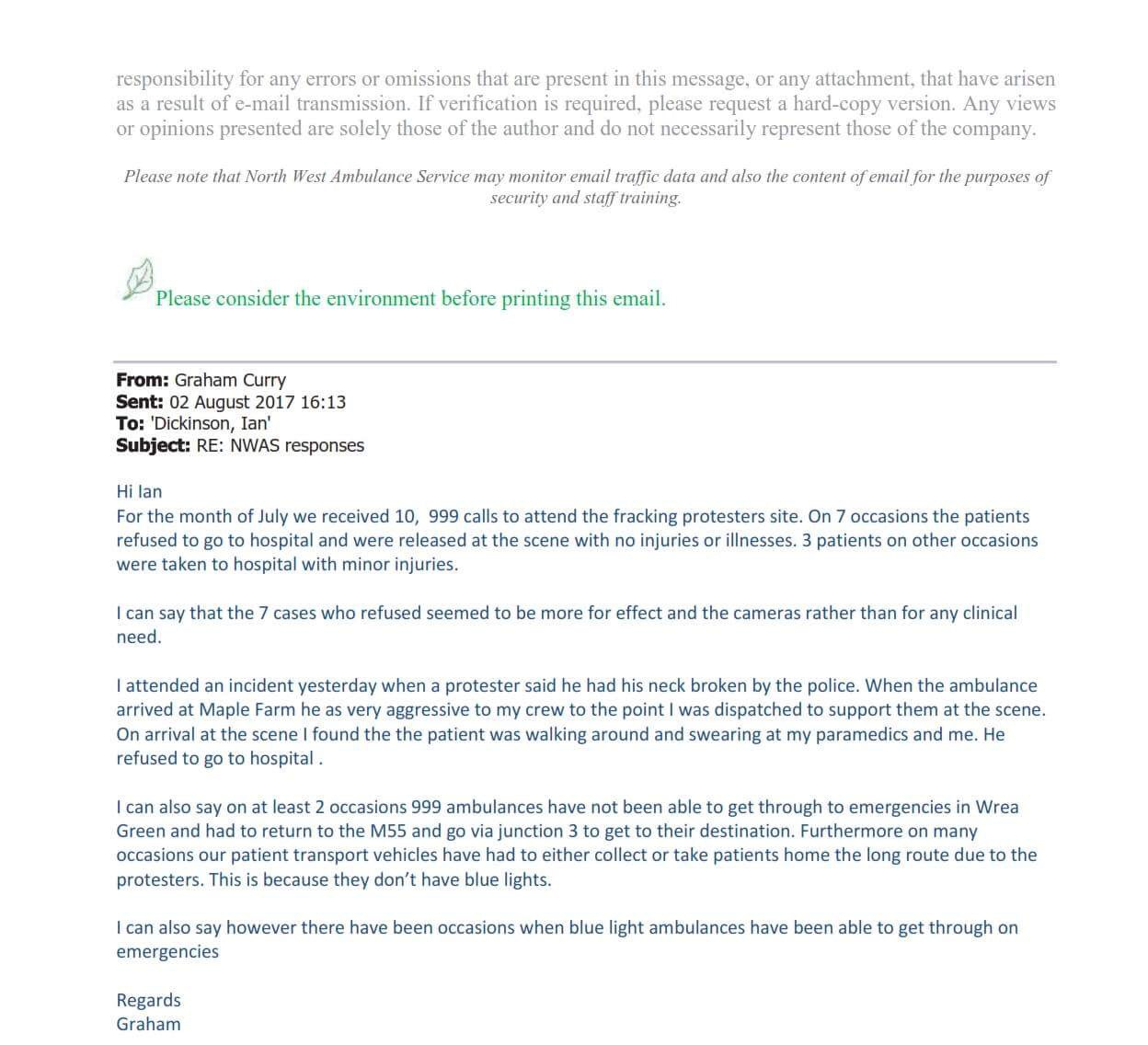 Mr Curry wrote the email in August 2017 to Ian Dickinson, who works for the Lancashire Police and Crime Commissioner.

The first section dealt with 999 calls to attend to protesters outside the Preston New Road site. Today’s edition of The Times reported on this part of the email. (see “Fake injuries and false allegations”  below)

“I can also say on at least 2 occasions 999 ambulances have not been able to get through to emergencies in Wrea Green and had to return to the M55 and go via junction 3 to get to their destination. Furthermore on many occasions our patient transport vehicles have had to either collect or take patients home the long route due to the protesters. This is because they don’t have blue lights.”

A Freedom of Information request made in October by an anti-fracking campaigner asked North West Ambulance Service for the source of the statement in Cuadrilla’s application.

“Further to your enquiry below, I have made contact with the local area manager, Head of Service for Lancashire and our legal department and they are all unaware of any formal submission of this information. I also confirm that we are unable to provided statistics in relation to ambulance delays experienced whilst en-route to incidents, as our reporting system does not capture this level of information.”

Following yesterday’s meeting, the campaigner asked North West Ambulance Service to review its response because it contradicted the information in Mr Curry’s email.

The service replied this afternoon:

“I can confirm that the information I provided was accurate and approved by the both the Head of Service and our Legal department prior to release. Anything Graham submitted has not been formally recorded by the Trust and Graham retired on 31 October 2017.”

This evening, the campaigner wrote to members of the Development Control Committee. She said of Mr Curry’s email:

“It is, therefore, hearsay and only a personal opinion, and one that should not have been submitted to an official planning meeting. Conjecture is not to be placed into your decision-making process.”

“Only a few of you are close to our community, and it is highly disconcerting that a virtually all-male, Conservative-majority committee have made this ill-advised decision on the basis of pure misinformation, which will impact our lives in a serious manner.”

In the first half of the email, Mr Curry said the service received 10 emergency calls to attend Preston New Road. He said:

“On 7 occasions the patients refused to go to hospital and were released at the scene with no injuries or illnesses. 3 patients on other occasions were taken to hospital with minor injuries.

“I can say that the 7 cases who refused seemed to be more for effect and the cameras rather than for clinical need.”

“I attended an incident yesterday when a protester said he had his neck broken by the police. When the ambulance arrived at Maple Farm he as [sic] aggressive to my crew to the point I was despatched to support them at the scene. On arrival at the scene I found the the [sic] patient was walking around and swearing at my paramedics and me. He refused to go to hospital.”

This section of the email appears to be basis of an article in today’s Times, headlined:

The email from Mr Curry refers to a single person who made an allegation against the police. It did not mention television cameras and it did not state who had made the 999 calls.

But Mr Webster quoted the Police and Crime Commissioner, Clive Grunshaw as saying:

“The figures raised by NWAS [North West Ambulance Service] are deeply concerning. If people are calling ambulances on an emergency basis but not using them, this is diverting important resources from actual life-or-death situations. The public will rightly be angered if resources have been wasted in this way.”

“This shocking revelation about the behaviour of anti-fracking activists confirms what we’ve been saying all year — that their claims of police brutality are just a fabrication intended to sway public opinion.”

The anti-fracking group, Frack Free Lancashire, made a detailed statement to The Times before the article was published. The group said it respected the contribution to North West Ambulance Service and that its supporters made every effort not to cause any delay to any emergency services. It said:

“We are not aware of the incident of a protestor and a neck injury to which you refer”.

It said there had been a number of complaints about inappropriate behaviour from police and security staff which were being investigated. The group also gave details of the FOI response from NWAS.