Cuadrilla told the High Court today it faced an imminent protest threat to its Lancashire fracking site. But a group of environmental campaigners denied there had been an escalation in action at the site and accused Cuadrilla of submitting evidence based on ‘snippets taken out of context’.

The company was seeking an injunction to outlaw what it said was unlawful protest outside the Preston New Road site and premises of its suppliers.

The judge, Mark Pelling QC, told the hearing in Manchester he would rule tomorrow on whether to grant an interim injunction until a later hearing in July.

Cuadrilla and nine landowners have sought a three-part order against “persons unknown”. If approved, it would prevent:

Anyone who breached the injunction could be found to be in contempt of court and could face imprisonment, fines or seizure of assets.

Tom Roscoe, for Cuadrilla, told the court a press statement by the campaign group, Reclaim the Power, announced direct action against the fracking industry and its supply chain, beginning with a Block Around the Clock event next month. Mr Roscoe said:

“the threat that the Claimants face is direct and the threatened escalation is imminent: Reclaim the Power have threatened a “a blockade of unprecedented… scale and duration” in respect of the PNR [Preston New Road] Site. It is not therefore realistic for the Claimants to hold off seeking relief any longer.”

He said Cuadrilla and the landowners had “been the victim of a very long-running and extreme campaign of unlawful direct action”. He said there had been more than 350 arrests outside the Preston New Road site since Cuadrilla started work in January 2017.

The company had been “extremely patient in seeking civil relief in respect of it”, he said.

The injunction was “in no way intended to stifle the expression of those views”.

“The Defendants have a right to express their views”.

“They do not have a right to compel compliance with them by unlawful means.”

The injunction is similar to one secured by Ineos Upstream for sites across the country. Cuadrilla said it had relied on part of the wording in the Ineos order. This injunction is now being challenged at the Court of Appeal.

Mr Roscoe referred to a letter by Assistant Chief Constable Terry Woods, written in 2017 and used in evidence at the Ineos injunction hearing. This catalogued the techniques used by anti-fracking protesters including lock-ons, where protesters lock themselves together, and slow walks, where they seek to slow down lorries by walking in front of them.

Since the start of the Cuadrilla injunction proceedings, Mr Roscoe said there had been a “significant escalation of activity”. This included a lock-on to a caravan outside the site and a slow walk. Today there was a blockade of the P R Marriott depot near Chesterfield. 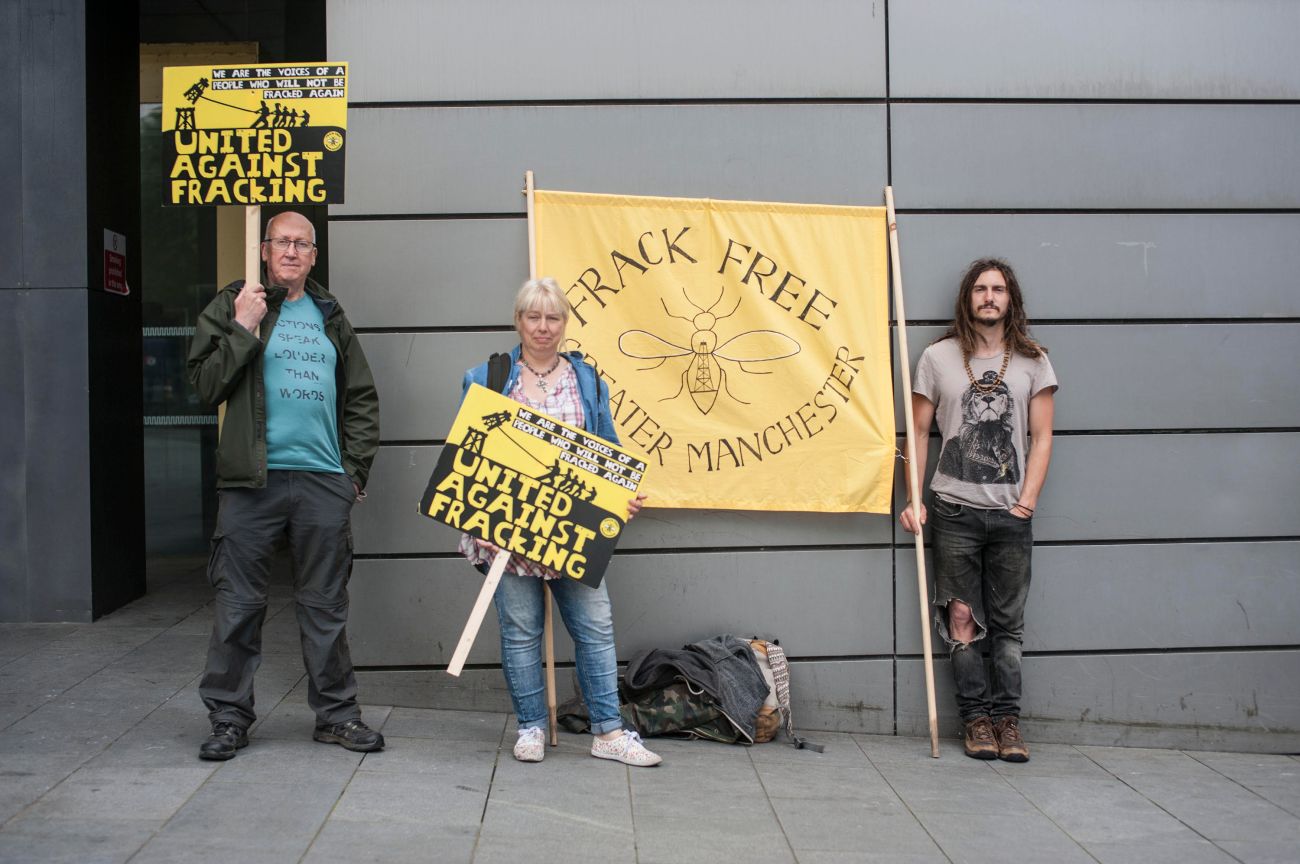 Mr Roscoe said Cuadrilla sought to continue a previous injunction which outlawed trespass and expires at the end of August this year.

On the section outlawing obstruction of the site, he said:

“It is not reasonable for an individual to walk along the centre of the carriageway.”

There were gasps from members of the public in the court when he said Cuadrilla was seeking to prohibit obstruction on a section of road that stretched from junction 4 of the M55 to 50m east of the site entrance.

When challenged by the judge to provide evidence that this “exclusion zone” was needed, Mr Roscoe said the company would reduce it slightly at the western end to the junction of Preston New Road and Peel Hill, rather than the motorway junction.

On the section of the injunction seeking to protect Cuadrilla’s contractors, Mr Rosecoe said:

“If the injunction is agreed to prevent the blockade at the PNR site people will look for another place to do it and [contractors’ premises] would a convenient place to do it.

“There is a real threat that in the future there will be groups of two or more people undertaking actions against Cuadrilla’s supply chain.”

“Before it can be worked out whether someone risks being in contempt of court, they have to check out a website on whether the company is or is not covered.

“I have never come across that as a formulation before.

“It is a remarkably clumsy way to crack a relatively modest nut”. 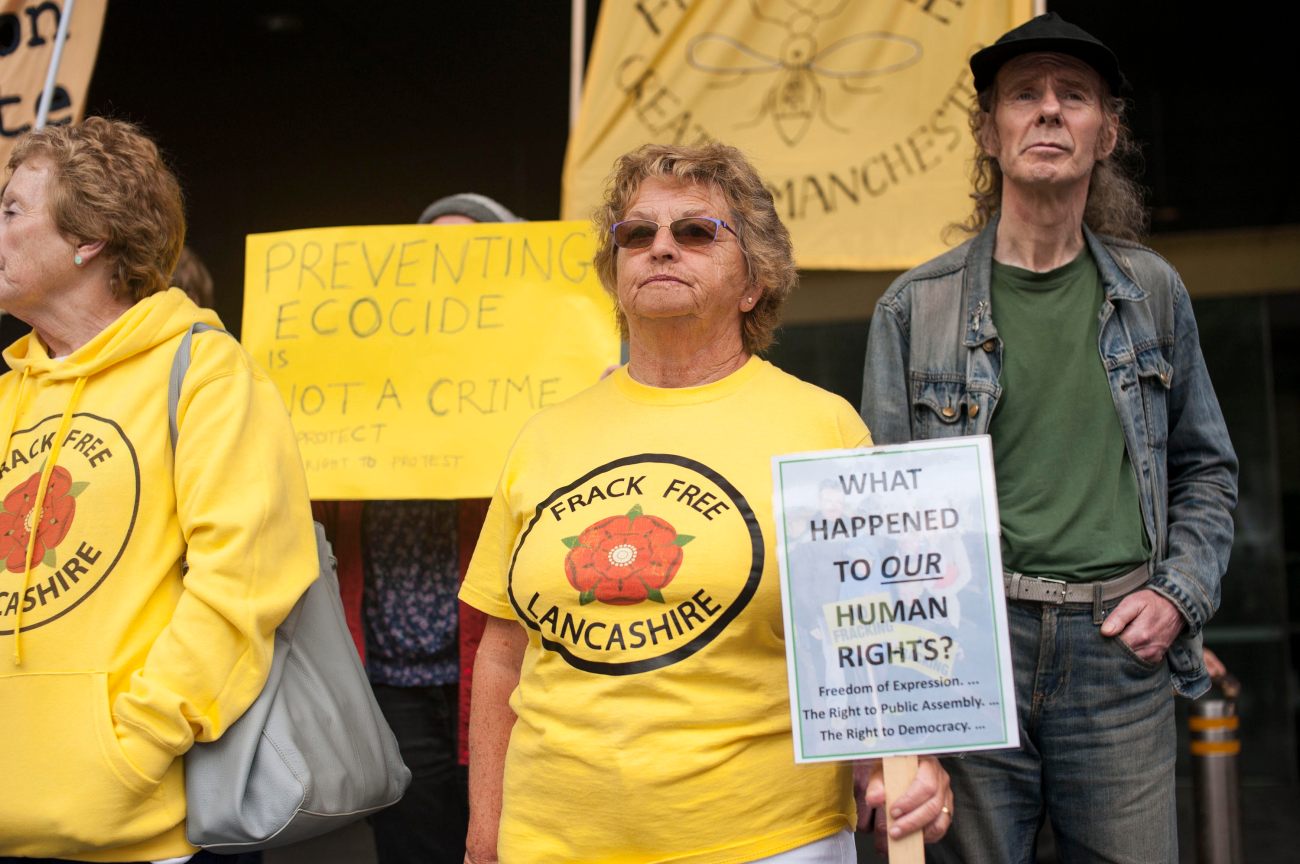 Ian Crane, speaking on behalf of the campaigners, questioned Cuadrilla’s claim that there had been an escalation in protest action.

“This belies the observation by Cuadrilla that there had been an escalation in protest activity.”

He said he wanted to challenge some of Cuadrilla’s statements and call witnesses to substantiate them.

“The Cuadrilla evidence requires cross-examination, after time to prepare rebuttal, with the evidence largely being just allegations or “snippets” of protest or other activity taken largely out of context.”

On the caravan incident, Mr Crane said Cuadrilla regained access to the site after four hours. The slow walk referred to by the company was a regular march agreed with the police. Today’s protest outside P R Marriott was not against Cuadrilla, but IGas, which was operating in north Nottinghamshire and had not taken out an injunction against protesters.

He quoted a Cuadrilla executive, Mark Lappin, who reportedly said that the company had “not lost one minute of operational time” and that protests at Preston New Road were the equivalent of bad weather in the North Sea. Only 20 incidents had cost more than half an hour’s delay, Mr Crane added.

“This is accepted as the cost of doing business when you are engaging in an activity that does not have a social licence.”

The lost time was not out of proportion when account was taken of strength of community feeling, he said.

“When this industry has tried to quell any kind of opposition it resorts to persons unknown.

“The claimants [Cuadrilla and the landowners] have failed to name any defendants, despite many hundreds of pages claiming evidence”.

Mr Crane said lawful protests were often a nuisance but should be treated with a degree of tolerance. The human rights to freedom of assembly and expression should be protected, he said.

Of the Cuadrilla injunction, he said:

“This is being seen as an assault on human rights. The wider community would see a far-reaching injunction as a further erosion of civil liberties.

“What is being sought is a means to shut down all opposition despite the fact that five and a half years the industry claimed it was going to achieve social licence.”

Asked by the judge how restricting obstruction of the entrance would have this impact, Mr Crane said:

“It is considered to be part of the lawful and peaceful protest. If it goes beyond lawful, there are police powers to deal with it.

“There is an increasing community that are concerned about [fracking], and wish to take advantage of their fundamental rights to peacefully protest.”

Mr Crane also criticised the scope of the injunction:

“They (Cuadrilla) are concerned about a window of three weeks and it concerns a specific organisation so it is not appropriate to put a very far reaching injunction in place, with its impacts on Article 10 and 11 rights [of the Human Rights Act].

“If the greater concern is Reclaim The Power then it is up to the court to decide what constitutes Reclaim the Power. It would be beholden on Cuadrilla to be more specific about what they are addressing here.”

Mr Crane said there was a risk that people could inadvertently breach the injunction because they did not know a contractor was covered by it. Some protesters did not use social media or the internet, he said.

They could find themselves in contempt of court and facing a much greater penalty that the maximum from committing a criminal offence, he said.

The hearing was adjourned until noon tomorrow (1 June 2018)