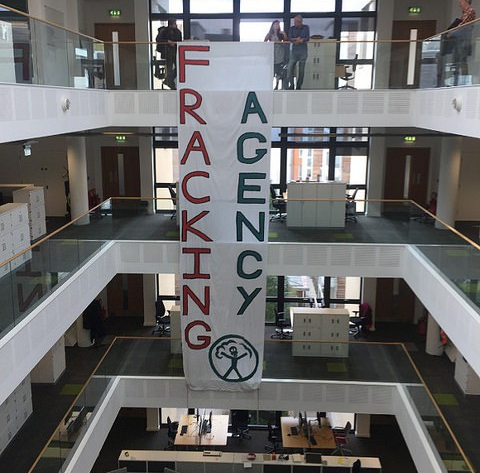 Bristol Rising Tide protest at the offices of the Environment Agency in Bristol, 15 September 2018. Photo: Reclaim the Power

The Environment Agency’s offices had been open for the Bristol Open Doors Day, an event offering free tours of the city’s landmark buildings.

Laurie Underwood, from the group, said:

“On the one hand, the Environment Agency is preparing the country for adapting to the impacts of climate change, but on the other, it is dishing out permits for onshore oil and gas drilling which will exacerbate the climate crisis.

“We call on the Environment Agency and its workers to take a tougher stance against a reckless fracking industry which threatens our air quality, our water quality and our climate.”

The group pointed out that the Forestry Commission, another agency which comes under the Department for Environment, Food and Rural Affairs, decided recently not to renew the lease on an exploratory drilling site near Leith Hill in Surrey. The decision was based on the risk of damage to nearby ancient woodland.

Laurie Underwood called on the Environment Agency to be “more pro-active in speaking out against the environmental impacts of new, unwanted fossil fuel extraction”.

“They should follow the Forestry Commission’s lead and tell the government that licensing fracking isn’t compatible with its environmental mission. Stop the fracking permits. Stop approving climate change.”

DrillIOrDrop invited the Environment Agency to comment on the protest. This post will be updated with any response.

Bristol Rising Tide protest at the offices of the Environment Agency in Bristol, 15 September 2018. Photo: Reclaim the Power

On its website, the agency said it ensured “that oil and gas operations are carried out in a way that protects people and the environment”.

It said it works closely with Public Health England, the Health and Safety Executive, the Oil and Gas Authority and local Mineral Planning Authorities.

On a page headed Facts about fracking, it said:

“We are confident that the risks can be controlled by good operational practice, reinforced through effective, robust regulation.

“We have conducted a detailed environmental risk assessment of the potential risk of hydraulic fracturing (fracking) for shale gas and found that the regulations are sufficient to protect people and the environment”.