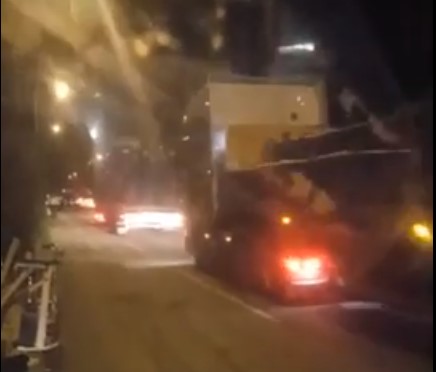 The road to the site at Little Plumpton near Blackpool was closed during the delivery.

All the equipment needed by Cuadrilla to carry out the UK’s first frack of a horizontal shale gas well is now on site, the company confirmed.

“The convoys were carrying all the frac equipment which is now on site – pumps, coiling tubes etc.”

A spokeswoman from Gate Camp, which has been monitoring operations at the Preston New Road site, said:

“With people dying around the world as a result of climate change, it is insane that our government pushes ahead with its destructive fracking policy.

“Seeing the police state facilitating a fracking company with over 30 heavy goods vehicles during the night, is a feeling of utter betrayal. It is hard to find words.”

“Following Cuadrilla’s decision to carry out deliveries in the early hours of this morning, a policing operation was put in place to ensure safety and to minimise disruption to the local community.

“The delivery to the Preston New Road site by Cuadrilla was within its traffic management plan agreed with Lancashire County Council.

“A small number of protesters were subject to containment for their safety and safety of others due to the size of the vehicles involved and nature of the delivery.

“Our aim as always is to ensure is a consistent and coordinated policing response and ensure a balance between the rights of people to peacefully protest, together with the rights of the wider public, including local businesses, to go about their lawful activities.

“We aim to prevent, where possible, crime and disorder, but if it does occur we will provide an effective, lawful and proportionate response.”

“Yet more disgraceful scenes of violence and assaults from Lancashire Police have shocked us once again. The pure facilitation of this dying industry, desperately being kept alive by a misguided government, is beyond acceptable.

“Threats of the use of pepper spray against peaceful protestors, closing the A585 in both directions, repeatedly and assaulting campaigners to force this industry into an unwilling community, only serves to remind us that corporate interests come before community safety and democracy.

“We would also like to remind Lancashire Police that our community will still be here, even when the fracking industry has long gone. The fractures to our community through the betrayal of trust, infliction of violence and continued poor relations, are irreparable and will never be forgotten.”

Lancashire County Council said it was satisfied that the delivery was within the terms of the planning permission for the site.