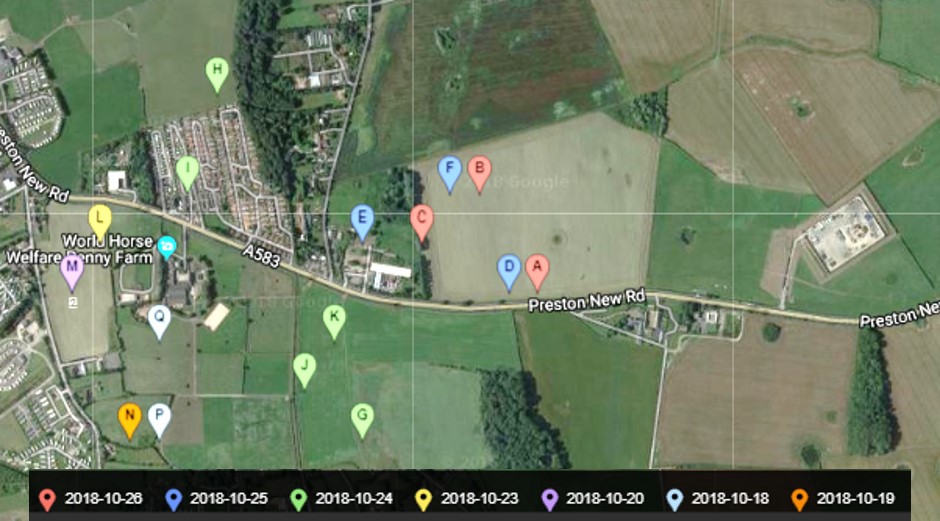 Location of earth tremors linked to fracking at Cuadrilla’s shale gas site to 26 October 2018. The most recent events are marked in red. Source: Google Imagery (c) 2018

The event, at 12.30pm (bst), happened while fracking was taking place, the company has confirmed.

It qualifies as the first red event near the site under the government’s traffic light system regulations for induced seismicity.

It is also the largest seismic event near the site since fracking began on 15 October 2018.

Extract from British Geological Survey list of seismic events around the British Isles since the Blackpool activity began.

A red event is where seismic activity during fracking measures 0.5ML or more.

Under the traffic light system, Cuadrilla must stop fracking the current stage, flush the well, reduce pressure and pause fracking for 18 hours. The integrity of the well must be checked and ground motion recorded. A report is sent to the regulators before operations can restart.

There have also been two amber events so far at Preston New Road were on 19 October and 25 October 2018. Amber events are where seismic activity measures 0.0-0.5ML. Fracking can be completed with caution, pressure reduced in the well and the integrity checked.

Cuadrilla said work would pause today for at least 18 hours and was expected to recommence tomorrow morning (Saturday 27 October 2018).

The company said in a statement:

“Micro seismic events such as these result in tiny movements that are way below anything that would be felt at surface, much less cause any harm or damage.

“It is reassuring that the monitoring and traffic light system is working as it should.

“All the relevant regulators were informed without delay and we have verified the well integrity is intact.

Today’s seismic event is the 17th earth tremor in a series that started on 18 October. There were two other events today, measuring 0.2 and -0.2ML.

There have been four consecutive days of seismic activity this week, comprising a total of 12 tremors.

Cuadrilla recorded today’s event as 0.78ML but the British Geological Survey, which records to one decimal place, listed it as a 0.8ML.

A spokesperson for Lancashire for Shale said:

“Like the others that have preceded it in recent weeks, this is still a microseismic event that we only know about because of the intensive monitoring being performed by both Cuadrilla and the British Geological Survey, using highly sensitive instrumentation.

“It is many thousands of times smaller than the 4.4 ML earthquake that struck South Wales earlier in the year, but which caused no damage to property or injury to people despite being felt over 100 miles away, including in Lancashire.

“People need to accept that these imperceptible microseismic events are just a feature of the fracking process. Provided that Cuadrilla continues to observe the requirements of the Traffic Light System and adheres to its government-approved Hydraulic Fracture Plan, there is no reason to suspect they are a precursor to more significant ‘felt seismicity’.”