The government has resumed its quarterly survey of public attitudes to fracking and shale gas. The latest results, published this morning, show support for fracking stands at 15%, down 3 percentage points, and opposition at 31%, down 1 point.

The previous Wave tracker survey, published in August 2018, dropped questions, for the first time since 2013, on whether people supported or opposed fracking.

At the time, the Department for Business, Energy and Industrial Strategy (BEIS) said the questions would be asked only annually in future to allow space for “more focused questions” on subjects, such as consumer issues or employment rights.

But BEIS explained last week why the questions were returning:

“With the UK entering a new era of shale gas exploration it is only right that we routinely gauge the opinion of the British public and so the questions on supporting/opposing shale gas development will return to each quarter of the tracker.”

The fieldwork for today’s results was carried out before a series of earth tremors linked to Cuadrilla’s fracking at Preston New Road near Blackpool.

15% of those surveyed said they supported fracking, the second lowest level recorded since the question was first asked nearly five years ago.

The latest figure was down 3 percentage points on the result for March-April 2018 when the question was most recently asked. It was up on the record low of 13% a year ago.  Strong support for fracking remained unchanged at 2%.

The gap between support and opposition has returned to the level last seen in summer and winter 2017. 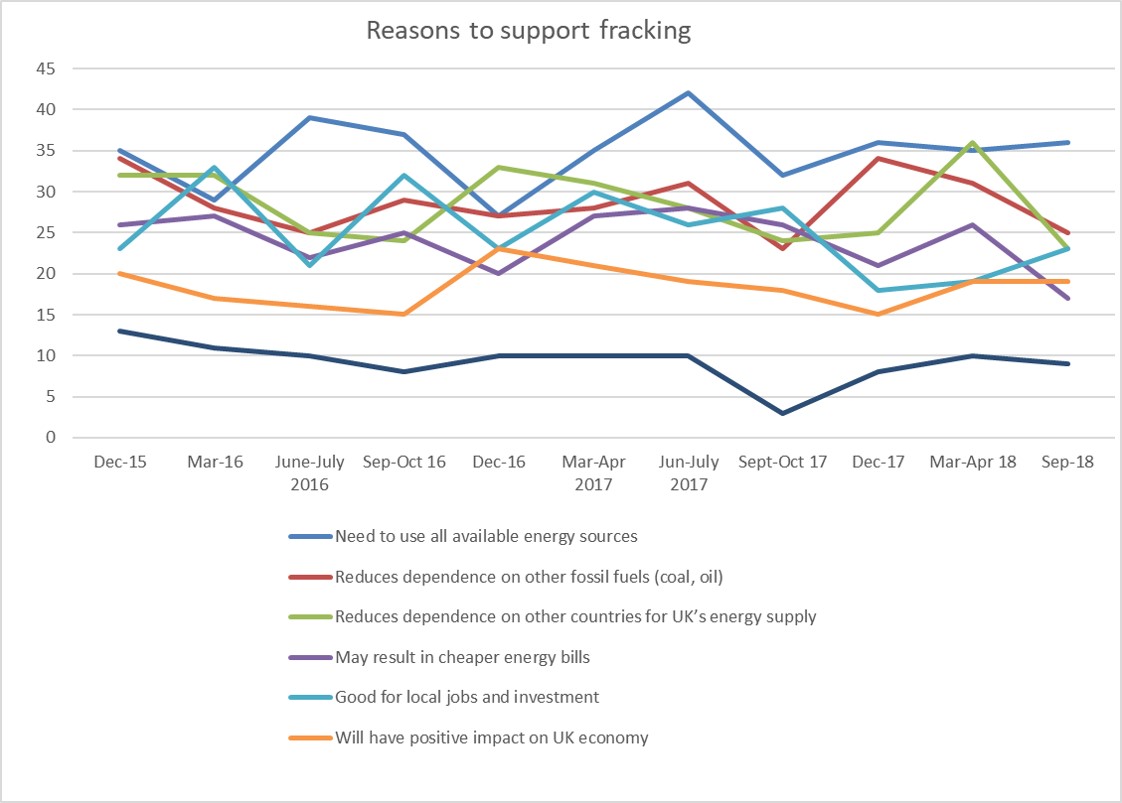 The most common reasons to support fracking were:

Community benefits and the shale wealth fund were among the least common reasons to support fracking (4% and 1%).

This was down 1 percentage point on March-April 2018 when the question was most recently asked and down from the record high of 36% a year ago. But opposition to fracking has remained about 30% since March 2016.

Strong opposition was down 1 percentage point to 12%.

Geographically, the people most likely to oppose fracking, according to the survey, were those living in Wales (41%), the North West (38%) and Scotland (36%).

People who said they knew a lot about fracking were more likely to oppose than support (58% compared 24%).

The most common reason for opposing fracking were:

Half those surveyed said they neither supported nor opposed fracking, the highest recorded by the survey so far. This was up slightly on the 47% when the question was most recently asked (March-April 2018).

The main reason for neither support nor opposing fracking was a lack of knowledge about it (77%).

4% said they did not know whether they supported nor opposed, unchanged on the survey when this was last asked.

75% of people said they were aware of fracking. This is down slightly on the 78% recorded in the most recent survey and in September 2017.

People living in the north west and Wales had higher level of awareness (83%) and those living in London (56%).

“The widening gap between opposition and support is hardly surprising and neither is the fact that more than twice as many oppose shale gas as support it.
“This polling clearly shows that acceptance of the industry’s claims for shale gas benefits is vanishing even amongst their supporters.

“Support for the idea amongst those backing fracking that shale gas might lead to a reduction in dependence on other countries for UK’s energy supply has collapsed from 36% in March to just 23% in September. Similar falls can be seen for the claims that shale gas will reduce dependence on other fossil fuels (25% compared to a previous 31% ), with the same story for the claim that fracking may result in cheaper energy bills (17% compared to a previous 26% ).

“It would appear that people are at last seeing through the industry’s spin, and once the impact of the recent earthquakes and the IPCC’s warnings regarding climate change filter through we would expect the gap between opposition and support to widen again.”

The fieldwork was carried out from 19-30 September 2018 on the Kantar TNS Omnibus. The results of the Wave 27 tracker are based on face-to-face home interviews conducted with a representative sample of UK adults aged 16+. The sample size, of 4,258, was more than double that used when questions about attitudes to shale gas were previously asked (March-April 2018).