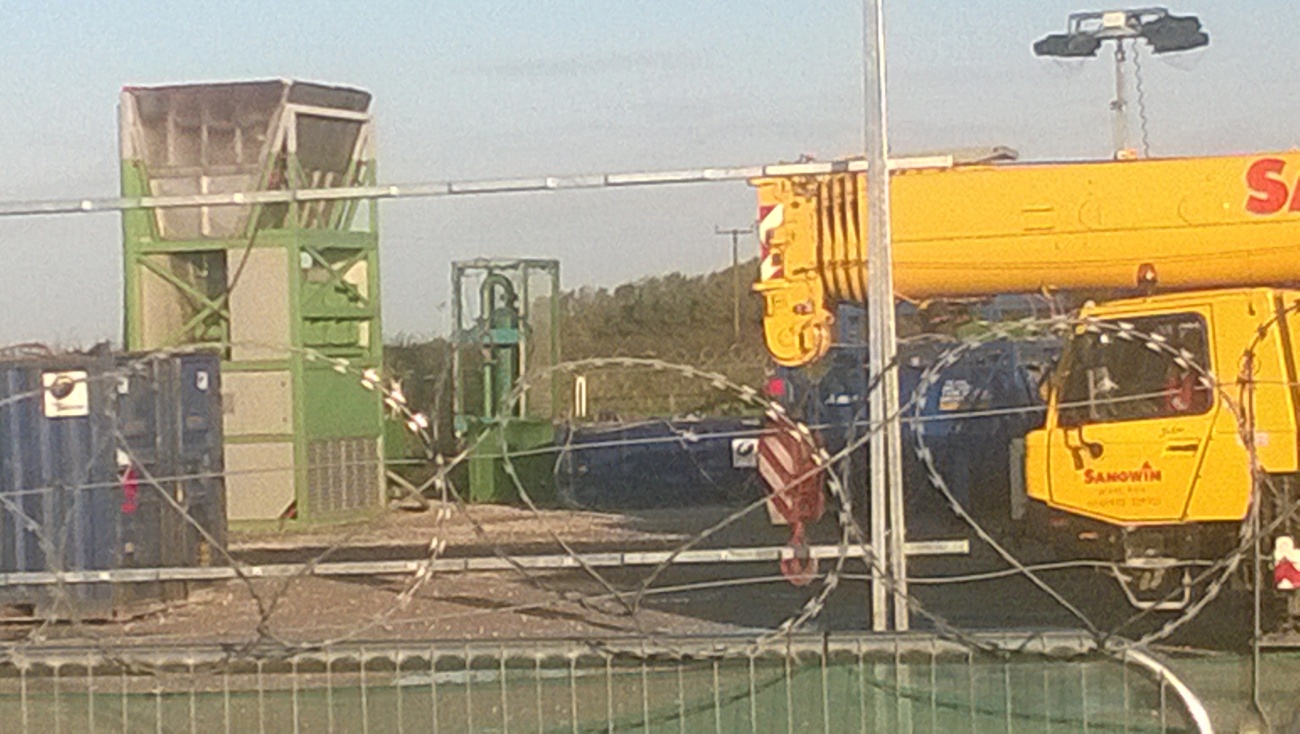 This post has live updates from the meeting of East Riding of Yorkshire Council which is discussing Rathlin Energy’s application for three more years to operate its West Newton-A oil and gas site north of Hull.

This is the second extension requested by the company since permission was first granted in 2013. A previous application for three years was granted almost two years ago.

Planning officers have recommended approval of the application with a no-fracking condition. But there have been more than 100 objections, including two nearby parish councils.

The Conservative-controlled planning committee is expected to hear from one speaker in favour of the scheme and one against.

“We are pleased that the planning committee was minded to approve our extension application and we would like to thank them for their considered deliberations and for their positive decision.”

Outside the meeeting, Harry Clark, who spoke against the application, says the councillors should have taken into account Rathlin Energy’s finances.

“Rathlin made a statement that the debt had been cleared and that they now have the capital to deliver the project.

“I would rather see something from the auditors. It is easy for the company’s agent to make that statement.

“If I were the council officer making the recommendation to approve I would have looked a little more closely at the commercial viability of the company.”

Mr Clark says he was surprised that more councillors had voted against the company this time. He says:

“Maybe next time we will win. We have to keep trying. If Rathlin complete the drilling and the exploration and want to go to production it will have to come back again.”

Another East Yorkshire resident says she is “disappointed but not surprised by the vote.

“It give us a glimmer of hope that it was not unanimous. But it is sad that, where we are now with climate change, that councillors should not listen to the United Nations and the climate change reports. We are going in the wrong direction.”

She added that for campaigners the fight continues. Referring to Rathlin’s breaches of its environmental permit in 2014, she says:

“We will not let Rathlin Energy get away with what they got away with last time. We will be monitoring them very closely.”

Several members of the audience, including one of the speakers, Cllr Andy Strangeways, complain that the meeting had started seven minutes late to allow Rathlin Energy to arrive. Some opponents of the scheme say they would not have been allowed into the meeting if they had arrived late.

A member of the audience says her house flooded because of global warming. Cllr Pollard says the committee is not debating global warming. We are looking at an extension, she says.

The application is approved by six votes to five.

Cllr Phyllis Pollard, the committee chair, says the application is not about fracking.

Cllr Rudd says the conditions look after the interests of the area.

Cllr Boatman says “I can see us being here in another three years”, he says. I don’t want to do that, he says. Applause from the audience.

Cllr Galbraith supports the application. But he says people do need to wean themselves off hydrocarbons.

Cllr Stathers says if the decision throws out the application it will end up in the hands of the government.

He says he is concerned about the delays and he is confused about why the company has not gone ahead. He says this weighs very heavy on the lives of people living nearby.

I would urge Rathlin to get a move on, to get a positive result, one way or another. It with reluctance that I support the application, he says.

Cllr Whittle says he cannot support the application. We should not keep this hanging over the local population, he says. It has been going on for far too long.

I am well aware this is not fracking. I am here with no clear view of which way to vote. On this occasion, I believe, it has been going on for far too long. It should be resolved one way or the other.

Cllr Boatman previously supported temporary applications by Rathlin. The company has had enough time to complete the work, he says. I agree with the parish council who say the company has had enough time. They have had almost six years, he says. If they cannot do it in that time they should give up. If they want to come back with a full application they should do that.

We cannot have this hanging over this community.

He proposes opposing the applications.

Cllr Pearson says “shouting and screaming” does not enhance the case. He asks whether the application is about fracking.

Andy Wainwright, planning officer, says it is not about fracking, it is about conventional exploration.

Cllr Pearson says the company’s finances has nothing to do with the application. I support this application, he says. Fear of earthquakes is absolutely nonsense, he says.

“What about Channel 4 and Holland”, someone in the audience says

Cllr Bayram says the proposal is about the amendment of a condition. Any decision on the use of the land is filtered down from the government, he says. Permission has already been granted in the past. To refuse it would need a very good reason. I support the proposals, he says.

He says fluctuation of gas prices is not a reason to delay work. We need to be sure that all the exploration is completed this time. We don’t want this happening again, he says.

Cllr Bayram calls for a planning agreement and a payment to the community.

People in the audience shout “bribery”. What about the cold venting of the gas”, some says.

Cllr Pollard says the meeting will not continue if people intervene. Well listen to us then, the person says.

Cllr Chadwick says she is concerned that no work has taken place on the site. She asks whether the company needs another 36 months.

Planning officer, Andy Wainwright, says Rathlin is ready to go ahead with a second well. It is not a greenfield site. It is a drilling pad. This application is for a second borehole and 36 months would give flexibility to do the work within that timeframe.

Cllr Chadwick asks whether the committee can be sure that there will not be another application. Mr Wainwright says the company has given a solid reason for the application.

Cllr Strangeways, an independent county councillor, says there should be no doubt that Rathlin’s application is for fracking. He says the company breached 14 environmental permit conditions in 2014.

The company has previously applied for an extension, he says. At the end of the period of the permission the site should have been restored to its former use, he says.

The council has agreed to oppose government proposals on bypassing local councils.

This committee must not impose earthquakes on East Yorkshire residents, Cllr Strangewways says. The condition to restore the site must be imposed, he says. This council is based placed to make decisions on fracking. This application must be opposed, he says.

2.21pm: Speaker for the application – Elizabeth Walker for Rathlin Energy

Ms Walker, a contractor for Rathlin Energy, asks the committee to approve the application for another 36 months of use.

She says the well test in 2014 revealed significant gas recovery. Further work was delayed by approvals from the regulators and turbulence in the oil and gas markets.

Rathlin Energy has paid all inter-company debts, recapitalised its equity capital and arranged a farm-in agreement with other companies, she says.

This is a conventional oil and gas operation, she says. There is no permission to hydraulically fracture.

If the exploration was successful, it would apply for a production permission. If not, the site would be restored.

Harry Clark, who lives near the West Newton A site, speaks against the application.

He says he is at the meeting to represent local residents to oppose the proposals. Mr Clark says the Holderness coastline is one of the most areas subject to coastal erosion, made worse by sealevel rise caused by climate change, exacerbated by fossil fuels.

We do no need extra reserves of fossil fuels, he says. There are enough already known to last until a time when fossil fuels should not be used. Burning one third of reserves would take the temperature above the 1.5 degree limit set by the Paris climate agreement.

Mr Clark draws attention to breaches of environmental permit conditions, including spillages, air pollution, noise and vapour releases. These are serious issues for the local community. Imagine going through this, he says, and it is not necessary.

He says bills are unlikely to fall. There is not enough shale gas to make any difference to the cost of energy.

Rathlin Energy accounts show the company has about £34m of debt. The auditors are doubtful about the financing of the company. There needs to be a thorough financial assessment of the company’s accounts. The application should not be considered until the company had paid off its debts and paid a bond for the restoration of the site.

Andy Wainwright, planning officer, says there have been two letters received from residents at 1pm today. He says the points deal with fracking and the application is not to do with this operation.

He says there are extra public objections bringing the total to 121. The new objections deal with the capacity of Rathlin to deal with any problems. There were also concerns about the use of acid in the well and the impact of a nearby site of special scientific interest.

The applicant, Rathlin Energy, had added extra justifications for the application. It said West Newton-A was an existing well site and drilling a well here would involve less disturbance than a new site, Mr Wainwright says. He adds that clean surface water will be discharged into a neighbouring field drain.

Mr Wainwright says there is a new landscape assessment but it does not affect the application.

Cllr Phyllis Pollard, the committee chair, opens the meeting. The start was delayed slightly to allow for members of the public to come through the council’s additional security. 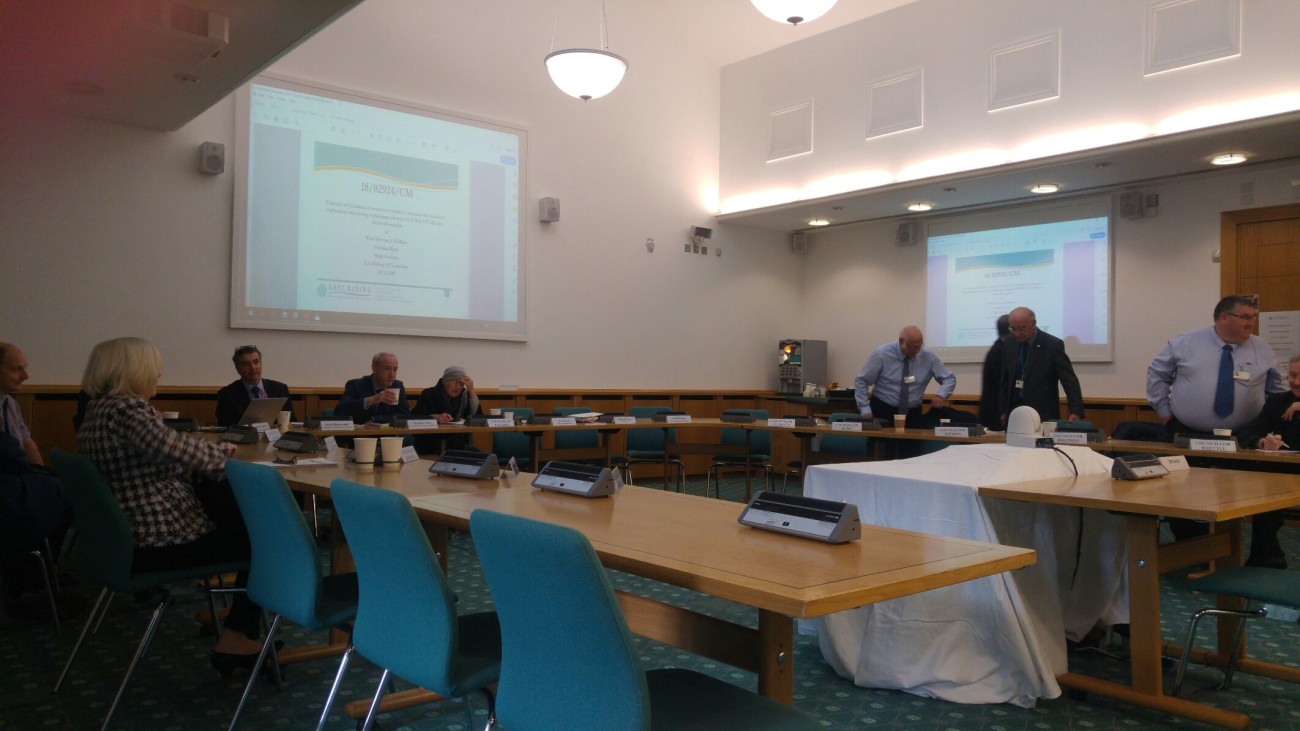 1.15pm: Demonstration outside the council offices 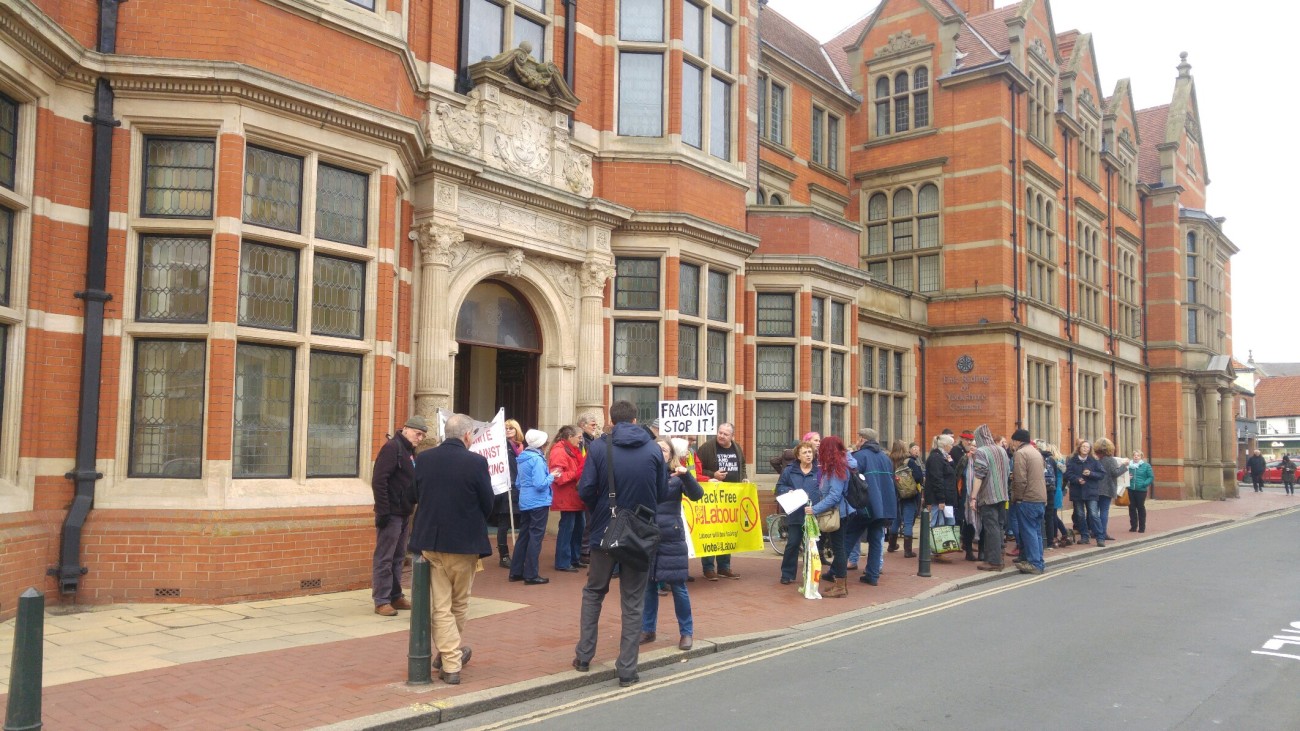