Frack Free Ellesmere Port and Upton will tell a public inquiry that the proposed site at Portside is just over 300m from the nearest homes. New properties are also earmarked for land just 250m away.

The group is supporting a decision by Cheshire West and Chester Council to refuse planning consent on sustainability grounds to test the flow of gas in the well drilled in 2014. IGas has appealed against the refusal and is expected to argue that there would be no environmental impacts or risks and that the scheme meets government policy.

But Frack Free Ellesmere Port and Upton (FFEP & U) will tell the inquiry, which opens on 15 January, that the area has changed since permission was granted to drill the first well nearly nine years ago. It accuses IGas of not being honest about the risks of the site.

One of FFEP & U’s expert witnesses, Colin Watson, said in his evidence that “area was substantially derelict land previously used for railway sidings servicing the docks” when permission for gas exploration was first granted in 2010.

But since then, Ellesmere Port has undergone “significant regeneration”, with new housing and leisure facilities nearby. The Ellesmere Port Development Board has identified the area of the well site for future residential development.

“the development of an unconventional gas industry simply does not fit into the Ellesmere Port development scenario, and undermines the successful attempts to regenerate a seriously deprived area. That the industry should want to set up shop so close to residential properties, and in the middle of a light industrial estate is simply unbelievable”.

“to risk local workers, local residents, and the regeneration effort being put in to Ellesmere Port, this is simply the wrong place at the wrong time.”

FFEP & U will argue that when planning permission was originally granted, the nearest house was 600m away. Since IGas applied to flow test the well in 2017, new businesses have moved onto the industrial estate and are now next to the well site.

Mr Watson, in his evidence submitted to the inquiry, said local planners had a vision of Ellesmere Port as an “attractive retail, service, leisure and residential location”. The area has enjoyed significant investment in education and sports facilities and since 2010, more than 1,500 homes have been built around the town.

“Land that was originally designated for industrial development has become a major housing estate with housing now 320m from the site, not the 600m when permission was initially granted. Looking at the development, there appears to be an intention to extend to within 250 m of the site, though planning permission has not been granted at this time.”

Mr Watson will tell the inquiry that IGas has not carried out a full cumulative risk analysis and the effects of a well explosion on a nearby explosives store and petroleum distribution centre had not been considered.

It had also not assessed the risk to residents on the basis that homes were more than 600m away, he said.

“IGas has demonstrated a disregard for the community, the council, and the regulatory bodies in the way that it has not been open and honest on the risks associated with the proposal, and in the manner in which it is managing these risks.”

“There are also significant concerns that this site is down a long cul-de-sac with issues surrounding policing and access for emergency vehicles in the event of a blowout or fire.”

Staff at one company, nearer the end of the cul-de-sac, would have to pass the IGas site to escape from a blowout or fire, he said.

“the legal requirement for multiple routes of escape for a site like this have not been met, nor has an emergency plan been agreed with the Emergency Services.”

These arguments are part of a long list of reasons compiled by FFEP & U on why it believes the development is unsustainable and should be refused.

Others include the site being 200m from an explosives store and 250m from the Manchester Ship canal. It is also 800m from a children’s play centre and 860m from a large residential home for elderly people. Within 1km, there are several schools and a hotel and tourism complex, the group said, while the surrounding area has been designated as Cheshire Science Corridor, attracting significant research facilities and businesses and seeking to attract 20,000 hi tech jobs.

The group’s evidence said the site was above the important Sherwood aquifer, supplying many Cheshire villages and farming. It also argued that the well test had not been rigorously screened for pollution and noise impacts on the Mersey Estuary, a wildfowl site of local regional and European importance 270m away.

Mr Watson said the community did not trust the company because it drilled the original well to a depth of 2,000m, when it said in the application the depth would be 900m. DrillOrDrop report 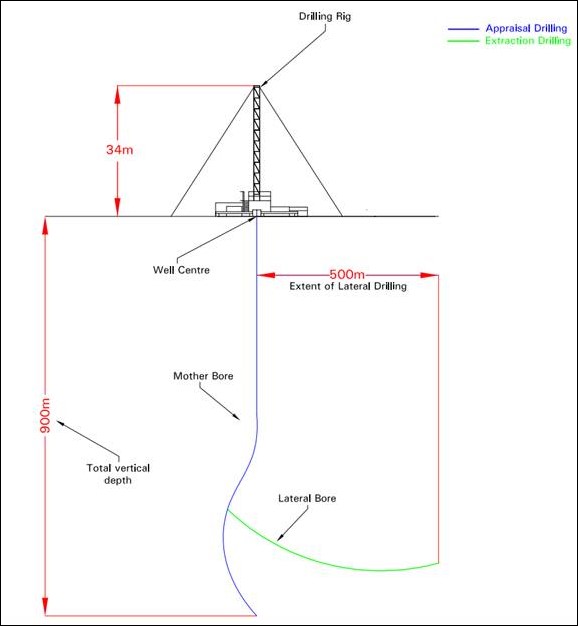 He said the application for well testing did not specify how the gas would be extracted. The company has referred recently to an “acid squeeze” but this was not mentioned in the planning statement. There is no information on pressure, volume or the type of acid that might be used, he added.

Mr Watson said IGas initially told FFEP&U that the target rock to be tested, the Pentre Chert, was a conventional resource and hydraulic fracturing or acid fracturing would not be used. But the IGas statement of case to the inquiry said the application would obtain data on the “unconventional hydrocarbon resource in the area”. Mr Watson said:

“From the definitions presented, when IGas refer to carrying out an “acid squeeze”, in line with the EA definition document this could amount to Matrix Acidisation.

“As a result, the inquiry should assess the proposed development on the basis that it includes Matrix Acidisation, unless the description of the development is changed to clarify the technique being permitted.”

IGas statement of case to the inquiry described the test as “short duration of around 18 weeks in total” and said the rig would be on site for approximately 35 days.

The company said the sensitivity of the landscape character of the area was “low, with a lack of coherence or balance and a consequent reduced susceptibility to change.”

It conceded that the nearest homes were 350m from the site but said:

“The effects of the proposed development would be limited at close quarters due to the established presence of tall, opaque security fencing. The 33m high workover rig, a mobile crane involved in mobilisation and demobilisation and two flare structures (8.2m and 12.2m) would have the potential to be visible and perceptible in the wider area whilst other elements are unlikely to be seen at all.”

“the presence of further construction, of limited duration, would be neither unfamiliar nor remarkable.

“Change in character would be negligible in magnitude and sensitivity is low. The resultant effects would thus also be negligible.

“whilst the workover rig in particular would potentially be visible from some locations, no notable landscape or visual effects would result. This is due to a combination of factors but most notably, the surrounding context is industrialised and contains similar structures and the proposed development would have a very short duration.”

“there are no predicted significant environmental effects associated with the proposed development and that any non-significant adverse effects are limited and are considered to be acceptable.”

The council refused the application because it did not support sustainable development principles on mitigating and adapting to the effects of climate change.

Its statement of case added that it failed to satisfy a local policy on hydrocarbon exploration, appraisal or production. This was particularly on noise and the cumulative impact on local communities and the environment, the council added.