Part of the INEOS team on the opening day of the Harthill inquiry, 24 April 2018. Photo: DrillOrDrop

Residents in Harthill, south Yorkshire, called today for the quashing of planning permission granted to Ineos for a wellsite in their village.

They told the High Court that a planning inspector was unfair in refusing their request for more time to consider new material at a public inquiry on the scheme.

They said the inquiry inspector, Stephen Roscoe, breached natural justice in not giving them an adequate opportunity to contribute.

The case, heard in Leeds, focussed on proposals for the management of traffic expected to be generated by the Ineos site at Common Road.

The court heard that Ineos submitted new traffic management proposals a month before the start of the public inquiry. But members of Harthill Against Fracking (HAF), which opposed Ineos’s scheme, did not receive a full copy until a fortnight before. 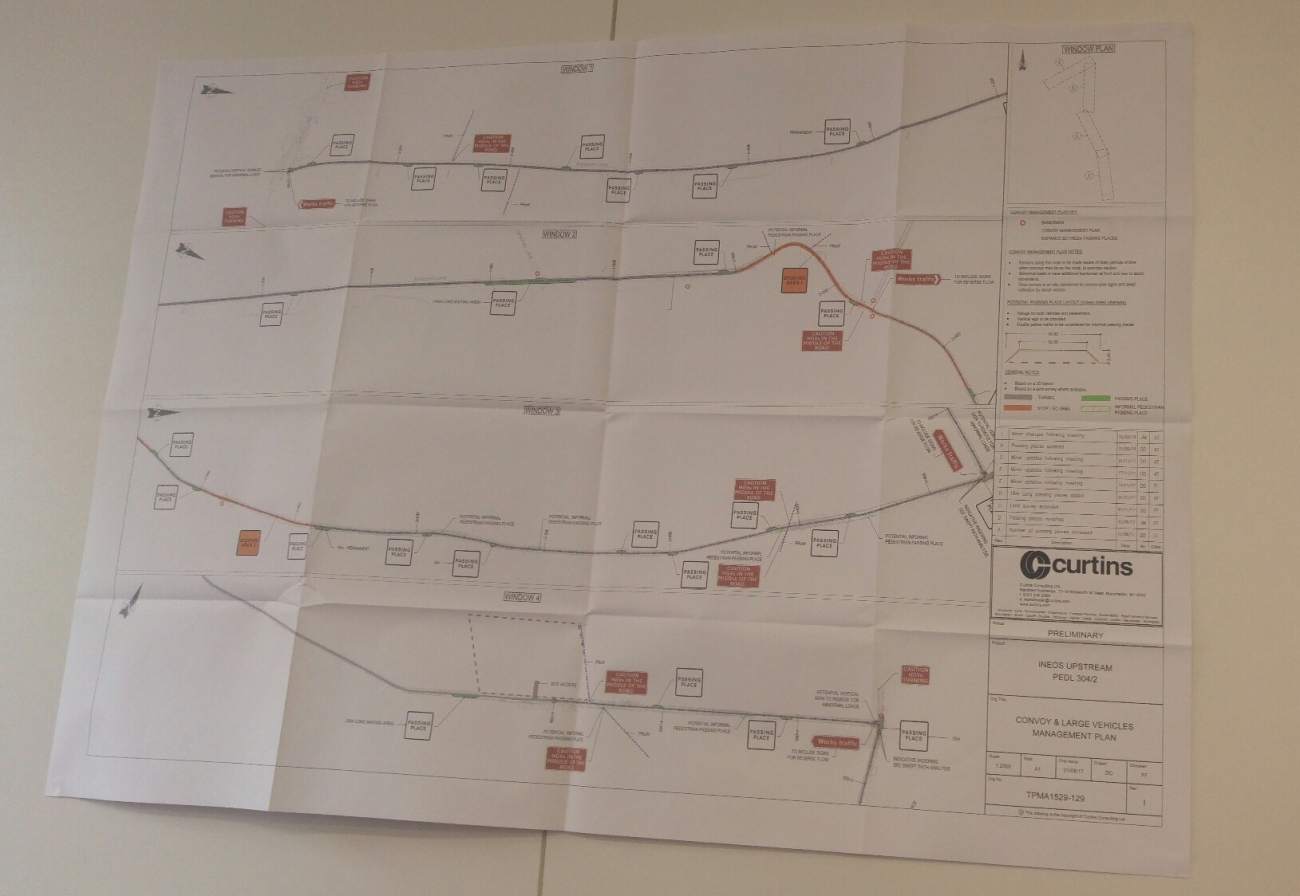 On the first day of the inquiry, HAF’s co-chairman, Les Barlow, and others, asked Mr Roscoe for an adjournment to give them more time to develop their case. The inspector refused but allowed members of the public to question Ineos’s traffic expert.

Mr Barlow, representing the group in court today, argued that this prejudiced their opportunity to challenge Ineos on the traffic plans.

His barrister, Ashley Bowes, said the new transport material submitted by Ineos was “substantial and significant” and the two weeks available to Mr Barlow to consider it was “insufficient”.

He said the guidance recommended four weeks for participants at inquiries to consider material.

“Mr Barlow and the Harthill Against Fracking were denied an opportunity to seek expert advice on the new material, adduce further evidence to meet the new material and then test the company’s case, informed by expert opinion.”

He said case law required that people taking part in an inquiry should have an opportunity to be heard and participate. They needed “knowledge of the issues in fact before the decision –maker … and an opportunity to adduce evidence and make submissions on those issues”, he said.

Mr Bowes said Rotherham Council, with all its expertise, had more than three weeks to consider the new proposals, including a private site visit with Ineos, before it made its decision on it.

He said HAF, made up of villagers, many of whom worked, were being held to a higher standard than the council. If it took the specialist highways officers three weeks, what chance did the group have?, he asked.

“They were denied a real, as opposed to theoretical, opportunity to participate in the procedure of the decision”.

He pointed out that the inspector commented that Ineos “chose a poor mechanism by which to put forward the ETMP”.

Stephen Whale, defending the planning inspectorate, dismissed the HAF arguments. He said the group was aware of the ETMP and commented on it at the inquiry. Mr Barlow cross-examined the Ineos traffic witness at the inquiry, he added.

No one from the group a complaint at the end of the inquiry or afterwards to the inspector, the Planning Inspectorate or Rotherham Council, he said.

“There is no evidence that the group or Mr Barlow perceived it to be unfair.

“Neither Mr Barlow nor Harthill Against Fracking told the inspector they wanted to instruct an expert witness on traffic.”

He added that HAF would have another opportunity to contribute to the traffic plans when the final version was submitted to the council under planning permissions. The group could submit an expert’s report but it has not done this, he said.

“There is nothing before the court about what Mr Barlow wished to say to the inspector had he been given the adjournment.

He said a summary of the new traffic management scheme was available to the group four weeks before the inquiry began and Ineos sent HAF full details two weeks before.

“Once they had the plan, they had everything they needed. They knew the case they had to meet two weeks before the inquiry started.”

Mr Litton said Harthill Against Fracking had chosen not to be a formal participant at the inquiry, by becoming a Rule 6 party. He said:

“Fair cuts all ways. Having deliberately chosen not to acquire rule 6 status, HAF are not in a position to start complaining. Had they been given rule 6 status, as Ineos encouraged them, they would have been served with the full document.”

Mr Bowes, for Mr Barlow, says HAF had told the court what it would have liked to instruct an expert to address.

“This is a residents’ group with limited resource. This should not be counted against it.”

He adds that the opportunity to contribute to a decision on the traffic conditions was not an adequate alternative to putting a case to the inspector.

Mrs Justice Andrews says she had to decide whether the inspector had given the group a reasonable opportunity and if not, would the decision have been any different.

“You have given me a lot to think about. I won’t do justice to the arguments if I give judgement now. In fairness, I will reserve judgement.”

A decision is expected next week.

After the hearing, Mr Barlow paid tribute to his legal team:

“We are quietly confident. We are hoping for a positive outcome and to take this to the next stage.”