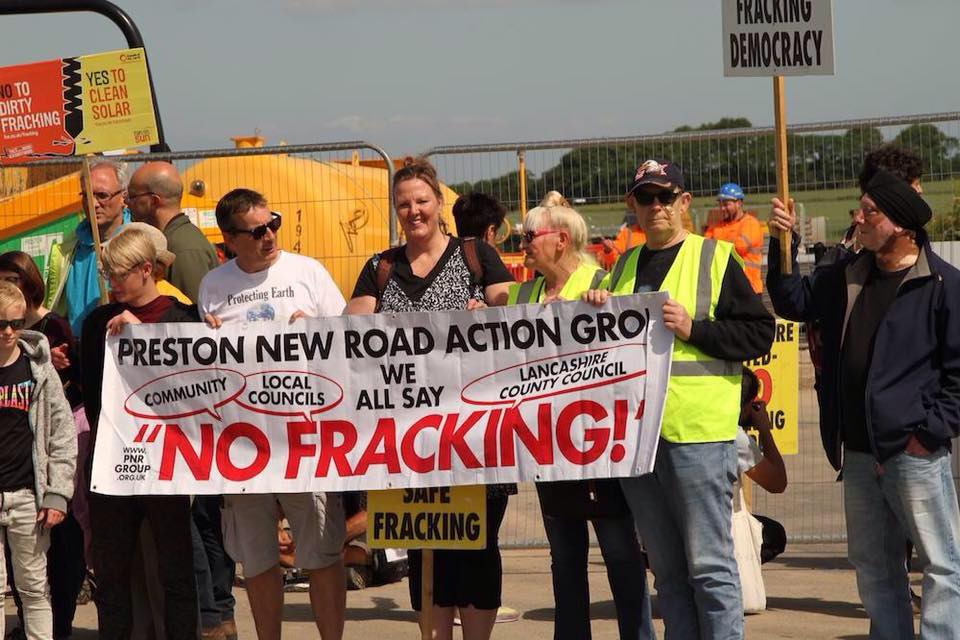 An investigation among people living near Cuadrilla’s Lancashire shale gas site has revealed that most believed fracking was bad for health, wildlife and the wider environment.

Many people felt stressed by the development and had lost trust in the democratic process. Some even contemplated leaving the area.

In this guest post, Paul Temme, the author of the research, explains why he investigated local attitudes to fracking at Preston New Road (PNR) and what he discovered.

In 2016, despite Lancashire County Council’s rejection of fracking, central government overruled the decision and gave the controversial industry the go-ahead.

I had started to consider conducting research into the impacts of fracking after witnessing a BBC interview with a local Fylde resident who expressed distress and anger. Sajid Javid may have ruled in fracking’s favour but it seemed not everyone was happy.

Months later, in July 2017, I stepped off the Preston to Blackpool bus and, clutching notebook and camera, crossed Preston New Road and passed through the gates of Maple Farm hub. Final preparations were underway for a “Rolling Resistance” action to the proposed fracking at the neighbouring Cuadrilla site.

Over the next two days, I cooked, ate and washed up with people wholly engaged in the anti-fracking movement. The hub seemed to buzz with an agitated energy. A cycling peloton glided in from Manchester and a coach disgorged Bristolians demonstrating their solidarity with the protesters, who were made up of pre-teens, grandmas, researchers, teachers, councillors, farmers and musicians. A freewheeling diversity bound by an undeniable singleness of purpose.

I couldn’t shake off the BBC interview though. I wanted know what locals thought about fracking, and if possible, capture that collective voice. What were the views for those living on the front line – sometimes the fence line – of this nascent industry? What were the feelings of those separated by a few green fields or a small stretch of Fylde countryside? What were the thoughts of those who saw the drilling equipment arriving a short distance from their doorstep?

Other questions began to form in my mind too. Were (as the pro-frackers claimed) the Mancunian cyclists and Bristolian busloads and anyone else outside the Fylde area merely ‘Rent- a-Mob’? Professional agitators, wheeled in whenever disruption was required? What was the truth between the claims and counterclaims relating to the voice of local communities?

Research for a Masters degree in 2017-18 presented an opportunity to find out. In addition to several semi-structured interviews, I devised a self-complete survey questionnaire containing 34 questions and hand-posted nearly 300 of them through the letterboxes of a representative cross-section of residences in nine small villages and hamlets around the PNR site: Wrea Green, Great Plumpton, Weeton, Moss Side, Westby, Little Plumpton, Peel, Higher Ballam and the Carr Bridge Estate.

I received 134 responses (a response rate of just under 45%). They painted a stark picture of the communities’ view on fracking.

43% aligned themselves with the Conservative Party

78% considered themselves to be knowledgeable about fracking

The questionnaire asked respondents whether they agreed with the basic statement I am in favour of fracking.

62% of respondents disagreed with this statement, with 45% strongly disagreeing. Only 16% agreed.

Respondents were also asked how they felt following the decision to grant permission to frack at Preston New Road.

With these two questions alone the collective voice of the local communities was made clear.

To help answer the question I had about whether the anti–fracking protests were staffed by the so-called rent-a-mob, the questionnaire asked residents about their level of engagement with fracking.

The questionnaire sought respondents’ views on a variety of perceived environmental and health impacts. In most categories, the majority saw fracking as damaging.

The results in each of these categories showed that most respondents did not accept or believe these arguments.

Respondents were pessimistic about the overall economic benefits the industry offered.

One of the clearest messages of the survey was that the outcome of the decision to frack had led to stress in the communities.

84% of respondents stated that this was the case, with 43% strongly agreeing. 11% disagreed.

73% of respondents disagreed with the statement that Fylde communities were prepared for fracking. 7% believed they were.

Startlingly, nearly a third of respondents (32%) stated they would consider leaving Fylde as a result of fracking. A further 23% were undecided on the issue.

The questionnaire asked a series of questions aimed at eliciting views on trust in the democratic process, central government and the regulation of fracking.

The responses in each of these cases were also clear and showed an alarming corrosion of faith in the democratic process and a strong scepticism in regulation.

One of the charges often levied at communities protesting locally based energy or large development projects is that of NIMBY-ism. The questionnaire participants were asked if they would support renewable energy e.g. solar, wind, tidal.

The survey made clear that communities around the PNR fracking site were knowledgeable about fracking, were actively engaged with protesting it and the majority rejected it.

Most believed it would be detrimental to the environment, health and biodiversity and rejected the pro-fracking arguments put forward by the industry. The fracking process had resulted in an undermining of trust in the democratic process and had not improved central government’s standing. In fact, responses indicated that fracking would cause Conservative voters to vote against the Conservative government.

To underscore the fact that residents did not appear to have a blanket NIMBY-ism to energy projects they overwhelmingly support renewable energy.

Residents also clearly testified to stress visited on communities from the fracking process as well as registering their unhappiness with the decision, to the extent that a significant proportion of residents may take the drastic decision to leave or would consider leaving Fylde to avoid its impacts.

DrillOrDrop always welcomes guest posts. Please get in touch if you have an idea for an article.