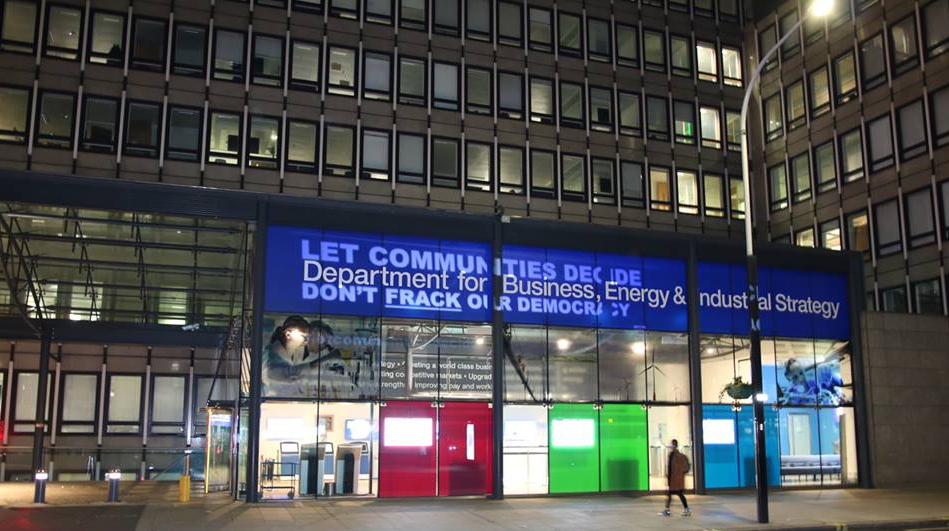 Results of a public consultation published this morning show that 97.5% opposed a proposal to class exploratory drilling for shale gas as permitted development, avoiding the need for a full planning application.

The government announced two days ago, as part of its statement on a  fracking moratorium, that it was scrapping both ideas.

The proposals were included in the 2017 Conservative manifesto and introduced in written ministerial statements in May 2018. They inspired a nationwide opposition campaign. The government was warned by its own MPs that it would not have the votes in parliament if it tried to push through legislation.

Today’s ministerial report on the consultation, which ended more than a year ago, said there were 15,266 contributions about permitted development. There was also a 307,720-signature petition opposing the suggestion. There was “minimal support”, the response said.

The main reasons for opposing permitted development for shale gas were:

According to the response, the shale gas industry was “overwhelmingly supportive of introducing a permitted development right for shale gas exploration development”. Its reasons were:

The consultation also asked for views on a proposed definition of shale gas developments that would qualify for permitted development.

84% disagreed with this definition.

Respondents said it was complex, ambiguous and unenforceable. Local authorities said 96 hours of testing might allow for some production, which was contrary to the purpose of exploration.

86% of respondents supported a proposal to exclude permitting development for shale gas exploration in protected areas.

“while there could be considerable merit in taking forward these proposals in the future, the sector in the UK is at too early a stage in its development to properly assess the impact of the measures or their ability to deliver changes suitable for the future potential planning needs of industry.

“The consultation has also identified that there is little consensus on what the measures would look like or the degree to which they would be worthwhile currently.

“As such, the Government has decided not to take forward the proposals for any changes to permitted development rights for non-hydraulic fracturing shale gas exploratory development at this time.”

There were more than 2,300 responses to the consultation on classing major shale gas schemes as Nationally Significant Infrastructure Projects (NSIP).

This would give fracking sites the same status in planning terms as power stations, motorways and airports.

NSIP schemes are decided by the local government secretary after a public inquiry chaired by a government-appointed planning inspector.

Material for the Let Communities Decide campaign in autumn 2018

The government report on this consultation said the proposal was opposed by 99.5% of individuals, 95% of local authorities and 100% of parish councils.

The most common reasons for rejecting the proposals were:

The shale gas industry said the proposals would provide more certainty to timings in the planning process.

Some responses said NSIP should be extended to conventional oil and gas and exploration and the appraisal phases of shale gas development.

The government said there no clear consensus on how the NSIP proposals would work in practice.

“It is our view that while the UK shale industry remains at an early exploratory stage, including the production phase into the NSIP regime would be premature”

The government has also rejected proposals for compulsory public consultations before shale gas companies can apply for planning permission for their schemes.

A consultation on this idea received 524 responses, most of them from individuals.

94.6% agreed with the idea but, according to the government, respondents felt engagement needed to be meaningful and meet the needs of individual communities.

The main reasons given for supporting the idea were:

“the planning system already features statutory mechanisms to ensure communities are adequately consulted on development proposals. It has also been acknowledged that industry are playing their part in positively engaging with communities. Therefore, and in the light of the decision not to take forward other legislative changes, the Government does not intend to take forward this proposal, at this time.”