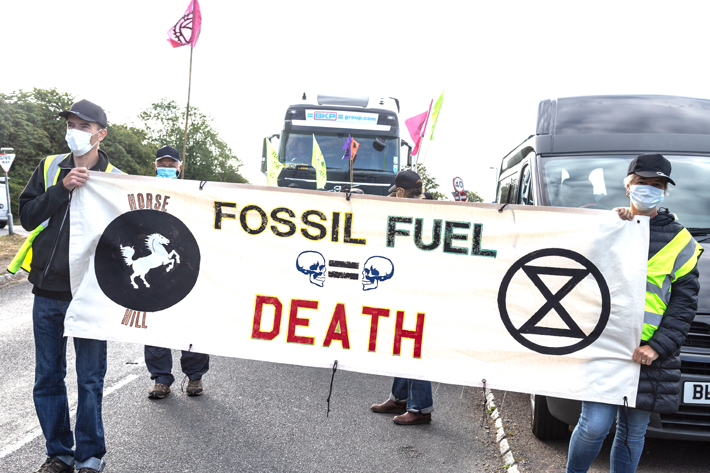 Environmental campaigners walked slowly in front of tankers on their way to the Horse Hill oil site in Surrey this morning.

Their protest was against fossil fuel production at the site, operated by UK Oil & Gas plc near Horley.

This is the second time in two months that protesters have used slow walking to highlight the implications of oil extraction at Horse Hill for climate change.

Last month, a local campaigner won the right to bring a legal challenge to the decision by Surrey County Council to grant planning permission for 20 years of oil production at the site.

The climate campaign group, Extinction Rebellion, said this morning’s protest brought together about 20 activists from the Horse Hill neighbourhood and across southern England. A spokesperson said the protesters had delayed four vehicles.

One protester from Brighton, said:

“I feel I have to take action now. The climate is breaking down as we speak. Unless we urgently reduce our dependence on fossil fuels there is going to be global human suffering on a scale we have never seen before.

“New exploitation of oil, like this, taking place on our doorstep at Horse Hill, is sealing us into a terrifying future.

“The UK government and Surrey County Council have failed to act to prevent new oil development, despite acknowledging the emergency. This protest is not fun. It is scary, but I feel I have a moral duty to do what I can for the sake of my children and future generations.”

“This is a small peaceful protest and we are taking what measures we can to keep everyone around us safe by maintaining social distancing as far as possible and wearing face masks.”

Another protester, a 37-year-old scientist based in Sussex, said:

“We are at a point in time where we are on a precipice of climate break-down and the human race must take the right steps to prevent this.

“This can only be avoided if we invest in renewable energy which is becoming cheaper and easier to harness.

“The fact that the government is not doing all it can to prevent mass extinction, and continues to invest in the use of fossil fuels, is criminal. For this reason, I have come to protest by slow walking the oil industry lorries entering the site.”

An environmentalist from nearby Redhill said:

“We can no longer put our heads in the sand and ignore what is happening.

“The Climate Change Committee, which advises the government, has warned that we need to plan for a 4 degree Celsius rise in temperature by the end of the century.

“We are currently just over one degree and we are experiencing floods and wild fires. A 4-degree rise will be catastrophic. We have a chance after Covid-19 to change path and the urgency of the pandemic shows what is possible if there is a will.

“Climate change is here for the foreseeable future. How we act now will decide what future we leave our children, future generations and all the other amazing species that share this incredible planet Earth with us.”

A High Court injunction prohibits certain protests at Horse Hill and other UK Oil & Gas sites. Local campaigners have challenged the injunction for the past two years. Another hearing is expected later this year.