The government’s health advisor says emissions from fracking are likely to be a low risk to public health – providing operations are properly run and regulated. Public Health England says shale gas extraction has the potential to cause pollution to air, land and water. But current evidence indicates […]

More people would prefer a windfarm than a fracking plant if they had to choose which was built in their local area, according to the pollng organisation Survation. In a study for yesterday’s Mail on Sunday, Survation found that 68.1% of people would choose a windfarm, compared with […]

The National Trust is fending off protests about comments made by its Director General, Dame Helen Ghosh, in today’s Times that the organisation was keeping an open mind on fracking but was unlikely to allow wind farms on its land. Up to 3pm today, the Trust had sent […]

Fracking could turn the world off fossil fuels – Gasland director

Widespread fracking could encourage people to support alternatives to fossil fuels, the director of Gasland 2 told a screening of the documentary in Lewes, Sussex, last night (23/10/13). Josh Fox said: “The way to get the world off fossil fuels is the number of places they want to […] 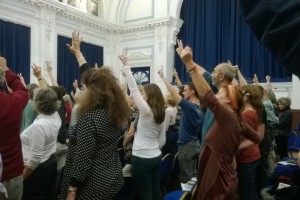 Campaigners against Cuadrilla’s exploration for oil at Balcombe came to Lewes for the first grassroots screening in the UK of the anti-fracking film Gasland 2. The event, also attended by the film’s director Josh Fox and producer Deborah Wallace, packed Lewes Town Hall last night (22/10/13). On-shore oil […]

How much water does it take to frack a well? And is it too much?

One of the criticisms of hydraulic fracturing is that it uses large volumes of water. But how much is large? That’s not easy question to answer. Firstly, the volumes are expressed variously in imperial and US gallons, cubic metres and litres. Sometimes the figure is quoted is per […]

Balcombe Parish Council has delayed its village ballot on attitudes to oil exploration in the village because Cuadrilla’s latest planning application needs revision. West Sussex County Council has reported that Cuadrilla has not provided information needed to validate the application to test oil flow rates at its exploration […]