Dates for 12 more trials were set today for campaigners arrested in the summer’s anti-fracking protests outside the Cuadrilla oil exploration site at Balcombe. The MP Caroline Lucas and four other protestors will stand trial at Brighton Magistrates on March 24th next year, charged with obstructing the highway […]

Six anti-fracking protestors who locked themselves to a fire engine outside Cuadrilla’s oil exploration site at Balcombe became the first people to be convicted following this summer’s protests. But a district judge at Crawley Magistrates Court today accepted they were acting according to their beliefs and conditionally discharged […] 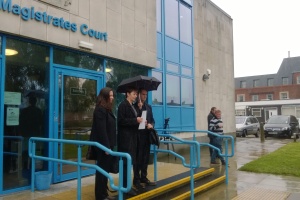 The Green Party MP, Caroline Lucas, accused the government of being the flag-waver-in-chief for the fracking industry, after she appeared in court on charges following a protest at Cuadrilla’s site near Balcombe. In a statement made outside Crawley Magistrates Court, she said ministers were ignoring warnings on the […]

Energy prices, shale gas and a campaign of misinformation

When the energy company SSE put prices up last week by an average of 8.2%, it blamed, among other things, government-imposed green levies collected through gas and electricity bills. Three days later, the company told the FT that government green energy policies would put up bills by £26 […]

Balcombe takes Belt It Out to Trafalgar Square

Anti-fracking campaigners from Balcombe are taking their musical protest to London on Sunday (October 20th). During the summer, villagers organised three Belt It Out Balcombe singalongs to voice their opposition in song to Cuadrilla’s exploration for oil. The London event, described as “Singing a new World into being”, is part […]

Balcombe Parish Council is to ballot villagers on their opinion on future oil and gas exploration in the area. The ballot, to be run by Electoral Reform Services, will inform the council’s future policy on exploration and extraction. It aims to collect opinions on: Cuadrilla’s application for planning […] 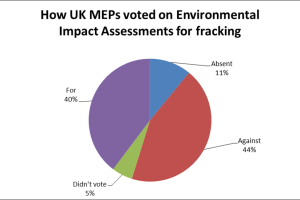 How UK MEPs voted on new environmental tests for fracking

Last week, the European Parliament voted by 354 votes to 300 to extend compulsory Environmental Impact Assessments to hydraulic fracturing operations. The vote among UK MEPs was 29 in favour and 32 against. 8 UK MEPs were absent and 4 didn’t vote.           Most […]

Caroline Lucas to plead not guilty over fracking protest

Green Party MP Caroline Lucas says she will plead not guilty to charges brought following a protest outside Cuadrilla’s site at Balcombe. In a letter to her constituents Dr Lucas, MP for Brighton Pavilion, says the campaign to reduce the threat of climate change had been important throughout her […]

The veteran environment journalist, Geoffrey Lean, says there is no sign that opposition to fracking is softening in Sussex. This week Mr Lean chaired a meeting between Balcombe villagers and the Environment Agency. He says around 300 people attended the meeting and none of the questions or comments […]