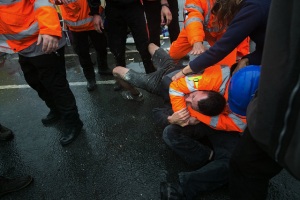 Lancashire Police confirmed today it was investigating a complaint that a security guard assaulted an anti-fracking protester outside Cuadrilla’s shale gas site near Blackpool.

9th May 2014 The last trial arising from the anti-fracking protests outside Cuadrilla’s oil exploration site at Balcombe has been dropped by prosecutors.

An environmental campaigner at the anti-fracking protests at Balcombe was found guilty this afternoon (29/1/14) of assaulting a police officer but was acquitted of resisting arrest. Tony Jones, 24, of Hackney, London, was accused of pushing Sergeant Michael Howe in the chest on August 19th last year during […]

Two environmental campaigners, Timothy Harris and Kaity Squires, have been found guilty of assaulting police at last summer’s anti-fracking protests at Balcombe. They were both conditionally discharged for 12 months and each ordered to pay £300 costs. Another campaigner, Zachary Hewitt, was found not guilty on the same […]

A member of a police evidence gathering team at the anti-fracking protests at Balcombe told Brighton Magistrates Court today (22/1/14) how he was hit on the lip by a placard carried by an environmental campaigner. PC Stephen Kimber, of Eastbourne Police Station, was working at the front of […]