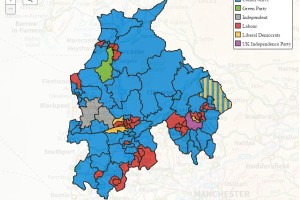 The Conservatives have made big gains in the county council elections in areas in the frontline of fracking for shale gas.

Transcripts and reports of parliamentary debates, questions and answers about fracking and onshore oil and gas for the two weeks ending 12 June 2015 Public opposition to fracking outweighs support Green MP calls on Labour to leave fossil fuels in the ground Gas versus renewables in bid to […]

We look at results from constituencies with a special interest in fracking or oil and gas exploration. We also review what happened to MPs who voted in parliament for a fracking moratorium earlier this year.

The Environment Agency reports the green colour of a stream near Cuadrilla’s Balcombe drilling site is still unconfirmed but probably a green dye. Update to Timeline – October 2013