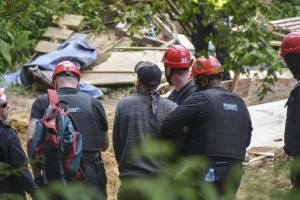 The High Court has extended an injunction against protests at Europa’s exploratory oil site near Leith Hill in Surrey for less than a day.

Campaigners in North Yorkshire have accused Third Energy, its security company and local police of attempting to “smear” opponents of fracking in statements about the alleged poisoning of a guard dog.

Surrey Police are appealing for information about a fire which destroyed a caravan and badly damaged a cabin belonging to opponents of oil exploration near Leith Hill.

Europa’s exploration site at Bury Hill Wood near Dorking is “the last place in the world” you want to have oil drilled, Green Party Euro MP Keith Taylor told opponents of the scheme this morning.

The Environment Agency has instructed Rathlin Energy to stop the smell coming from its exploratory oil and gas well at West Newton in the Yorkshire Wolds after complaints from residents that it was making them feel sick.