The comments come in a report about a sidetrack well drilled by Angus Energy at its Brockham oil site near Dorking last year (2017). Link to report (see p48)

Surrey County Council told Angus it did not have planning permission to drill new wells or sidetracks at Brockham. Despite this, the company received consents for the work from two other regulators and went ahead with drilling.

“This unauthorised development has highlighted discrepancies between the legislators of the oil and gas industry, as permits for the drilling of a new sidetrack were issued by both the Environment Agency and the Oil & Gas Authority, and their legislative requirements do not require planning permission to be in place before they are issued.

“Whilst perfectly understandable in terms of legislation, it makes it somewhat confusing and at times misleading for both those involved and those monitoring such development.”

The report, by the council’s planning development control team manager, is expected to be discussed at the committee’s meeting on Wednesday 21 March 2018. Link to meeting agenda

It traces the dispute over the sidetrack back to September 2016. At that time, the report said, Angus Energy asked the county planning authority for the go-ahead to do maintenance, known as a workover, at one of three wells at Brockham.

“They [Angus] were subsequently advised that the proposed work would be covered under existing maintenance agreements, but that the drilling of any new wells, including sidetracks, plus the testing or production from wells not already authorised, would not be permitted.”

Opponents of Angus’s operation monitored the site and reported 24-hour working to the council. Angus said night working was needed because it had detected the presence of hydrocarbons in the well called BRX4.

“officers relayed this information to the Health & Safety Executive, and on the basis of good practise it was considered reasonable to allow the night working for a period of one week to provide a safe environment for those working on site whilst the work-over was completed.”

“It subsequently transpired that a sidetrack had in fact been drilled.”

Angus Energy consistently argued that it had planning permission for the sidetrack, while the council said it did not. Both sides said they consulted barristers who supported their opinion.

“We have encouraged the submission of a retrospective planning application to regularise the unauthorised drilling of the sidetrack as well as the required testing of oil from the sidetrack, which Angus Energy’s planning consultant has agreed would be done.”

The application, part of which covers the sidetrack drilling, was published online earlier this month. It has been scheduled to be decided by the 23 May meeting of Surrey’s planning committee. DrillOrDrop report

Other consents at Brockham 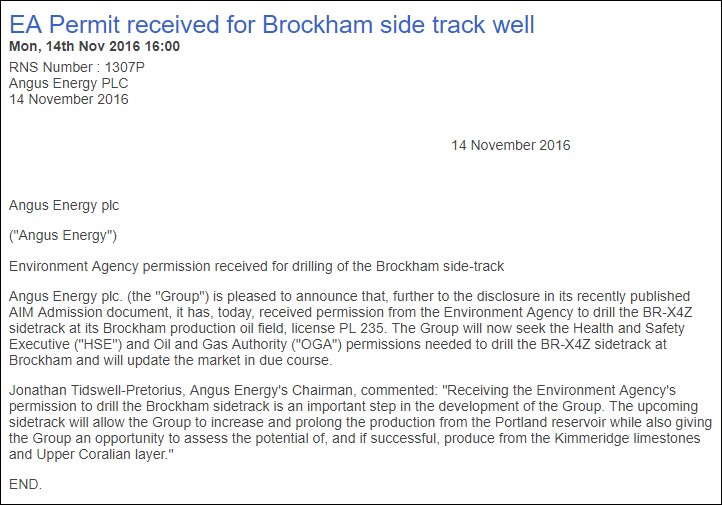 Angus Energy reported on 14 November 2016 that it had received permission from the Environment Agency (EA) to drill the sidetrack at Brockham. In a statement to investors, the company said it would seek consents from the Health and Safety Executive and Oil and Gas Authority (OGA) for the same well.

A month after the EA issued the environmental permit, Angus reported it was:

“pleased to announce that it has today received the final approvals required from the UK Government Oil and Gas Authority’s (“OGA”) and the Health and Safety Executive (“HSE”) to commence the work on the BR-X4Z well on UK onshore Production Licence PL 235. The rig is now on site and has started work on the approved program.” (15 December 2016)

A government document, issued in December 2015, says the OGA

“may provide consent to drill once the operator has:

“Discharged any relevant conditions placed on the planning permission by the MPA/LPA.”

The OGA, in its Consolidated Onshore Guidance, says companies that apply to it for consent to drill a well or a sidetrack are required to provide:

“A Board letter confirming availability of planning permission and indication of on-going planning disputes”.

In the Brockham case, the OGA said in response to a Freedom of Information request that it relied on a letter from Surrey County Council to Angus as confirmation that planning permission was in place.

This letter said that new boreholes, including new sidetrack boreholes into different geological formations would not be covered by existing planning permissions.