Surrey Police are appealing for information about a fire which destroyed a caravan and badly damaged a cabin belonging to opponents of oil exploration near Leith Hill.

Fire crews from Dorking and Leatherhead were called to the fire on Friday (15 September 2017) at about 4pm. The caravan and cabin were parked in a layby off Coldharbour Lane, near the site where Europa Oil and Gas has permission for drilling.

Pictures by Leith Hill Protection Camp (above and below) show the caravan had been burned to the ground. The cabin, which had been used for sleeping a few days earlier, was badly damaged and is no longer usable. 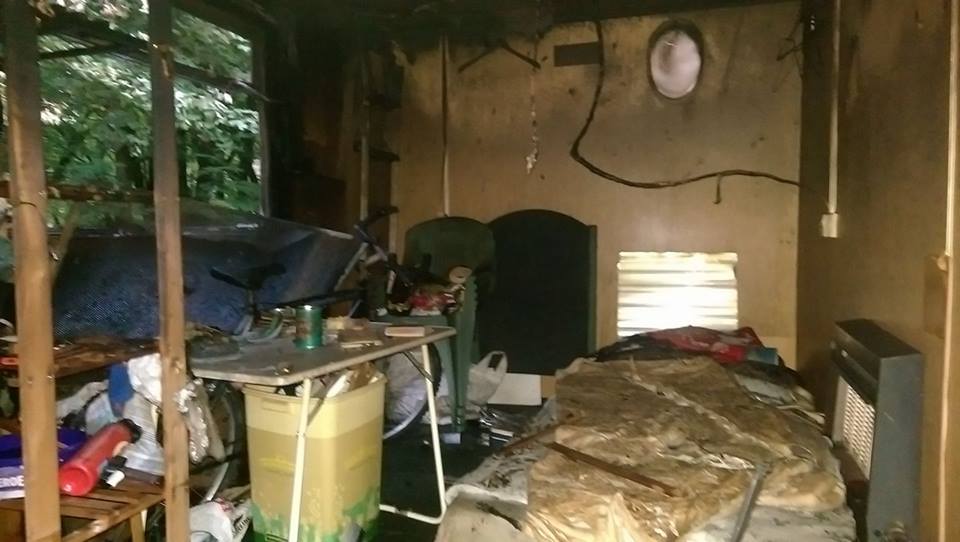 The inside of the damaged cabin. Picture: Leith Hill Protection Camp

Alice, a member of Leith Hill Protection Camp, said the fire started in the caravan, which was not being used.

“The caravan went up very quickly and the fire then spread to the cabin.

“I definitely think it was deliberate. It seems pretty clear it was arson.

“We had guests in the cabin just a few days earlier. They would have been badly hurt if they’d been asleep when it happened.

“We were shocked at first. It is not very pleasant being set on fire.

“But we are quite resilient and we are now dealing with removing the cabin.

“We are as determined as ever to oppose Europa’s plans.”

“The Mole Valley Safer Neighbourhood Policing Team are making enquiries after two caravans in a layby on the Coldharbour lane, Dorking, were heavily damaged by fire on Friday evening (15/9).

“Officers were called to the scene by Surrey Fire and Rescue service around 16:20.

“The caravans were uninhabited at the time.

“Anyone who may have seen anything suspicious in the area at around that time, or may have information to help officers with their enquiry, is asked to call Surrey Police on 101 quoting reference 45170101763.”

This is not the first time property belonging to the protection camp has apparently been targeted. About a month ago, the caravan appeared to have been rammed by a large vehicle, Alice said.

Europa has planning permission for 18 weeks of exploratory drilling at the site, known as Bury Hill Wood and Holmwood. The traffic management plan, a condition of the permission, is expected to be discussed by Surrey County Council’s planning committee on 18 October 2017. The site’s environmental permit and planning permissions for fencing have yet to be granted.

Opponents of the operation established the Leith Hill Protection Camp in October 2106 on the drilling site. The camp was evicted over two days in June 2017 and has since moved to the other side of Coldharbour Lane.

Since the eviction, five suppliers of equipment and services have said they will no longer work for Europa’s operation.