Campaigners call on Robin Hood in fight against frackers

The legend of Robin Hood is inspiring a campaign against plans by INEOS to explore for shale gas in the East Midlands. 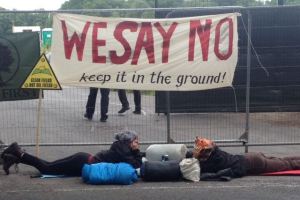 In this week’s update: Monday morning lock-on at UKOG’s Broadford Bridge site in West Sussex Protest at Broadford Bridge as local media are shown the site Friends of the Earth visit Preston New Road Photo call at the Major Oak in Sherwood Forest

In this week’s update on protests about fracking and onshore oil and gas in the UK: Complaints about delivery drivers and security guards at Cuadrilla’s Preston New Road site in Lancashire Five arrests at Brockham in Surrey where trucks delivered to Angus Energy’s site Several hundred people gather […]

Opponents of fracking have vowed to defend Sherwood Forest in Nottinghamshire after it was revealed that the chemical company, INEOS, is preparing to explore for shale gas.