The company behind the Horse Hill oil exploration well near Horley in Surrey is looking to carry out testing early in 2015, with production later in the year.

The companies with a stake in the Horse Hill exploratory drilling well near Horley, in Surrey, have announced they found evidence of oil at the weekend. 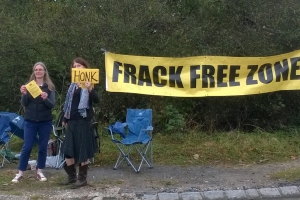 Concerns over Magellan’s fracking plans at Horse Hill near Horley Anti-fracking campaigners handed out leaflets to commuters in Horley, Surrey, today to raise awareness of the nearby Horse Hill exploratory drilling site.

The Denver-based oil and gas company, Magellan Petroleum Corporation, has confirmed in a statement that drilling operations at the Horse Hill-1 exploratory oil well near Horley in Surrey began on September 3rd 2014.

Another no—show by the industry for a fracking debate

15th July 2014 Another attempt at a balanced debate on hydraulic fracturing failed tonight because the pro-frackers again declined to take part.

A week of fracking events

April 4th 2014 At least nine events about fracking and shale gas are planned over the next week throughout England. Details, weblinks and email contacts are below.