Concerns over Magellan’s fracking plans at Horse Hill near Horley

Anti-fracking campaigners handed out leaflets to commuters in Horley, Surrey, today to raise awareness of the nearby Horse Hill exploratory drilling site.

This was the second consecutive Monday event organised by the Horse Hill Protection Group after members became suspicious about the purpose of the well. A meeting and picnic are planned for next month (October). 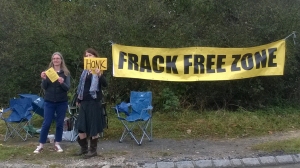 Horse Hill Developments Limited began drilling at the site on September 3rd. The operation is described as conventional drilling. The well is vertical and will not be hydraulically fractured, the company said.

But a press statement by HHDL’s partner, Magellan, on September 4th raised conerns among some anti-fracking campaigners that the site might also be used to look for unconventional hydrocarbons.

The statement said: “During drilling, Magellan will have the opportunity to core and log at its own expense several shale and tight formations in the Cretaceous and Jurassic sections, including the Kimmeridge Clay and Liassic formations. The Company expects that the information gained through these activities will provide valuable insights into the technical and economic viability of unconventional development elsewhere in the Weald Basin.”

On September 18th, Magellan appeared to change its mind. It issued another statement saying: “Magellan has decided to defer the opportunity at Horse Hill-1 to run a suite of unconventional logs over the Kimmeridge Clay and Liassic formations.”

Today, HHDL issued an update. Drilling continued to make good progress and had now reached a depth of 1,795 ft, in the upper part of the Jurassic, the statement said. The target depth is 8,680ft. The statement added that HHDL “would like to draw your attention” to Magellan’s statement of September 18th.

This has not reassured opponents of fracking. “While Horse Hill is ‘officially’ a conventional well, what happens here may affect the future of the site and the surrounding area”, the Horse Hill Protection Group said. “As a community we need to take a strong stand to oppose the exploration and development of shale gas and oil in Surrey.”

The group has organised a picnic on Sunday October 5th and a public meeting in Horley on Monday October 13th.