The government was warned this morning it risked losing the support of Lancashire conservatives unless it strengthened regulation of fracking and improved the benefits of shale extraction for local people.

During an adjournment debate on fracking, MPs accused ministers of “bowing down too easily” to the financial interests of oil and gas companies and of promoting regulation that was not “fit for purpose”.

Mark Menzies (Con), who represents Fylde where the only high-pressure high-volume fracking has so far taken place, said the government was testing his goodwill – and that of his colleague Eric Ollerenshaw, MP for Lancaster and Fleetwood.

“The public perception is there that the regulatory function in this country is still not up to speed with the challenges of onshore oil and gas activity”, Mr Menzies said. The government must be prepared to put in extra resources to regulate the industry.

“Anything short of that you will start to test the good will the good will of members such as myself and the honourable member for Lancaster and Fleetwood.

Mr Menzies called for an independent panel of experts to oversee the work of regulators and to assess the current regulations. The panel should be funded by government, he said, but its members should be independent, recruited through a fair, open and transparent application process.

Mr Menzies criticised arrangements to monitor Cuadrilla’s well at Preese Hall, which is due to be abandoned in April next year. This is the well where fracking caused two earthquakes in 2011 and distorted the casing. Mr Menzies said Lancashire County Council had proposed that the Environment Agency should monitor the well for five years. But the council had been told it did not have the power to enforce this. The Environment Agency was unwilling to take on the job and had left it to Cuadrilla.

“The public needs to know that any monitoring is being done by an independent body, not by a company involved in the process. That is where the Environment Agency really needs to step up to the mark. There has to be an obligation on the Environment Agency to provide all such environmental monitoring, because to ask the company or companies related to fulfil that role and that task is unacceptable to me and it does nothing to help public confidence.”

Eric Ollerenshaw criticised government proposals in the Infrastructure Bill to change the trespass laws and allow operators to drill below 300m without the permission of the landowner.

“By removing the age-old rights of a say of who drills under your land and how, is actually to me a quite heavy-handed manoeuvre which is reinforcing the view in my part of the world that the government is bowing down too easily to international oil and gas companies and their financial interests.”

“There is no definition of community. There is no statutory guarantee and there is no guarantee that a future Secretary of State for Local Government will not take these financial rewards into account when it comes to deciding on central grants. So nothing extra will be gained by having fracking in your particular area.”

Mr Ollenshaw called for a sovereign wealth fund for Lancashire. It should be additional to the local authority grants system and should be protected in law.

Tessa Munt, (Lib Dem, Wells) said the regimes for inspecting oil and gas wells were not fit for purpose because she said they were self-regulated by the operators.

“Where there are guidelines, as opposed to regulations, people won’t have the confidence. It is not a terribly difficult step for the government to make these regulations instead of guidelines and making this an inspection regime, instead of self-regulation“.

Caroline Lucas (Green, Brighton Pavilion) accused the government of contradicting itself over regulation.

“We have a government that will keep trying to persuade us that it will “put in place a robust regulatory framework that we need to make fracking safe and yet at other times it puts on a different hat and tells us how much it is proud of its  deregulatory zeal. My fear is that it the deregulatory zeal that will win out.”

Dr Lucas said a shale gas industry was not compatible with a safe and habitable climate.

“Building a whole new fossil fuel industry is the last thing that the UK should be doing if we are serious about securing that safe and habitable climate for our children and grandchildren.

“We cannot afford to burn the vast majority of existing fossil fuels reserves if we are to avoid the worst impacts of climate change. In the context of cuts and austerity, using public money from tax breaks to relentless PR initiatives to help fracking firms find yet more oil and gas I think is inexcusable. “

She said a complete shift was needed within a generation in all the major economies, including the UK, to carbon neutral energy systems. The country had the technology and could afford to do it.

“What we need is the political will because we cannot do it while making ourselves, not less, dependent on any kind of fossil fuel. The only safe and responsible thing to do with shale gas is to leave it in the ground.” 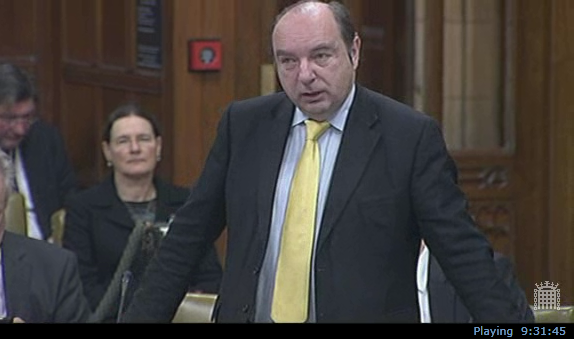 Norman Baker, MP for Lewes, who called the adjournment debate on fracking

This morning’s debate had been called by the Lib Dem MP for Lewes, Norman Baker, who until earlier this month had been a Home Office minister. He said the risks of shale gas had been underplayed and the benefits overstated. The risk included threats to climate change, rural areas and public health, he said.

Ian McKenzie (Lab, Inverclyde) called for greater investment in renewable energy, particularly hydro and tidal power. And Mike Weir (SNP Angus), called for all powers on petroleum development to be transferred to the Scottish parliament.

David Mowatt, (Con, Warrington South) said shale gas could mean lower prices for the UK petrochemical industry. This might not matter to Lewes, he said. But it did matter in Teesside where decisions were being made about whether to invest there or on the east coast of the US.

“When 900,000 people in our country work for industries that rely on relatively cheap energy. For us to say that that doesn’t matter, for us to say we should ignore all of that is quite arrogant and quite wrong and quite disappointing.”

Graham Stringer (Lab, Blackley and Broughton) accused Dr Lucas of having a “de-industrialisation policy”. This was, he said, responsible for increasing the cost of industrial goods by 9%, putting people out of work and increasing domestic energy costs by between £50 and £120 a year. He said efforts to reduce our CO2 emissions were, in effect, subsidising imports from China and India. Shale gas would bring tax revenues and provide feedstock to the petro-chemical industry.

The shadow energy minister, Tom Greatrex, said there was a public acceptability test for shale.

“None of us in the room can tell anybody how much can be recovered. We don’t know and we won’t know until exploration happens. Exploration will only happen with greater public consent.”

He said regulation was “undoubtedly stronger than the regime in the US”, citing the “4,500-page” environmental impact assessment by Cuadrilla for its proposed shale gas wells at Roseacre Wood and Preston New Road in the Fylde. He added that guidelines were, in themselves, a form of regulation.

On monitoring the Preese Hall well, he said: “The well did not fail and the HSE have made clear they are satisfied by the steps taken by the operator to deal with the small pressure that was detected.”

“The more scientific and well-founded research analysis that is put in the public domain the more we can reassure people that this is an opportunity that is incumbent on us as a country to look at and explore.

“It can be done in a way that is safe, with a strong regulatory structure and that can provide jobs energy security and in the short term tackle climate change by removing other dirtier fuels.”