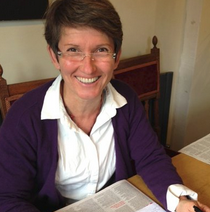 Sussex businesswoman, Beki Adam, reflects on her conversation with her neighbour, the Conservative MP for East Worthing and Shoreham Tim Loughton, at Wednesday’s lobby of parliament on the Infrastructure Bill and fracking access

I pointed out to Tim Loughton that in the very same building we were meeting, the Environmental Audit Committee were considering the safety issues, climate implications and economic viability of shale.

And at exactly the same time that this highly contentious Bill and clauses are being pushed through parliament, DEFRA won’t release the unredacted report on the impact of fracking on rural economies, even though more MPs have recently called for it (including Nicholas Soames on 8th Jan).

Defra said it was just a draft. So where is the finished report? The version with 63 redactions is from last March. Yet Government say this is a swiftly moving area of policy. But they clearly can’t keep up themselves, as this report has never been finished. Or is that being hidden from us too?

It would be a joke if it weren’t so serious. The feeling from the EAC this morning was on all levels investing in the renewable sector makes more sense.

Tim (who I had tea and 40 minutes with), seemed wholly unconcerned about the need for a massive amount of drilling to extract anything like a useful amount of gas or oil.

He said: “I don’t have the slightest inclination to be concerned about it being 1,000 wells”.

He was also wholly unconcerned that China has invested in Cuadrilla when I questioned him about the reasonableness of the claim that shale would bring energy security.

He also did not seem to know that New York State has just banned fracking on health grounds, nor was he keen to investigate that fact.

He did seem slightly bothered that the tax payer would end up being responsible for unending monitoring and maintenance costs for all the drilled wells, and that those costs have not been properly calculated.

But his general attitude was relaxed because he said it won’t affect his own constituency.

I don’t think he realises climate change, methane leakages and compromised local aquifers would affect the whole of Sussex.

Tim didn’t seem keen to acknowledge that his party had circumvented the democratic process.

We remember when Government and industry said a year or two ago “We won’t do anything without communities on board”.

When that didn’t happen, they changed their line to “We will give you money”.

And when that didn’t work, they brought in the Infrastructure Bill which says “We will take away your rights to stop fracking”.

I pointed out that Government had said progress on the clauses in the Infrastructure Bill would be “entirely dependent” on the public consultation and that over 40,000 people had written in, with a 99% objection rate. But despite this Government had pushed on.

Tim’s only comment was that the Government had been foolish to have said this because it would have encouraged people to object.

Shale as a bridge fuel and the implications for planning

Tim didn’t want to acknowledge that shale gas might be designated as a Development Consent Order project, which would mean that the local planning process would be circumvented.

But he did acknowledge that the Infrastructure Bill was designed to stop people being able to object to shale.

I said: “If Government would do that, why would they not take local planning out the picture too?“

We moved on to talk about shale as a bridge fuel. I said this only works if shale came online soon (which would necessitate ripping up the countryside pretty quickly). So the long planning permission process would have to go too.

The scale of shale

Tim didn’t seem to know how massive a shale industry would need to be to retrieve any significant amount of fuel.

I asked: “At what point would you say OK, no more then? After one well, 600, or how many?”  I tried to explain that many responsible people see this as an industry that is in the wrong timeframe. It risks stranded assets and debt. But this didn’t seem to concern Tim.

He said it was like water pipes. I said it wasn’t because people didn’t object to water pipes. No chemicals were injected during water pipe laying or into the pipes. Even the London Underground was commonly accepted as necessary when it was constructed. But fracking isn’t. It’s just a political decision.

Time and time again Tim said: “It may not happen anyway”.

This would appear to indicate the Government must know it cannot be relied on and is not really necessary for our fuel supply.

I mentioned that the clause in the Infrastructure Bill on maximising economic recovery was a devious change from the Wood Report, which applied only to offshore oil and gas, not to onshore as well. Tim said he didn’t know about that, so I suggested he investigate.

Was it worth it?

All in all it was worth having the chat, and I hope Tim has a broader picture of what is at stake here than before.

We talked a little about my farm on the Downs and he said he knew of a Bronze Age monument on the hill there. I said that was on our land and that I often look at it on the skyline and recall that was man’s activity 5,000 years ago. I can still drill a borehole in sight of it and the water is still clean.

I was trying to say that we have to remember the timescale of risks with aquifers and well integrity. I pointed out the Royal Society has warned the Government about the risks of fracking scaling up with the number of wells – and it takes a lot of wells.

I’m sure Tim will vote to take our land rights away in the Infrastructure Bill vote, but he may not do it in quite such a blase manner now.