Drill Or Drop is pleased to post a newspaper article about shale regulation, which disappeared off the Telegraph’s website in under 24 hours.

The article was found by one of our readers and is included here so that it can be restored to the web for all but the sharp-eyed who spotted it the first time round. 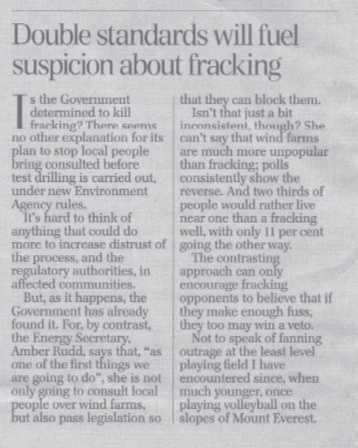 It was quoted in a press release from the Department of Energy and Climate Change on Sunday, which criticised misreporting of the regulation of a potential shale industry.

DECC said articles in the Independent (Friday 12 June) and the Telegraph (Saturday 13th June) implied that fracking would receive less scrutiny from the public. Both articles reported on government plans to remove public consultation on environmental permit applications for some oil and gas operations.

But before DECC could issue its release, the Telegraph article had been taken off the paper’s website.

The Telegraph article accused the government of double standards in its plans to allow local communities to block applications for onshore windfarms but prevent other local communities from commenting on the oil and gas permits.

“It is hard to think of anything that could do more to increase distrust of the process, and the regulatory authorities, in affected communities”, the article said.

The Secretary of State for Energy and Climate change can’t say that wind farms are much more unpopular than fracking, the article said. “Polls consistently show the reverse. And two thirds of people would rather live near one than a fracking well, with only 11 per cent going the other way”.

The different approach, the article added, “can only encourage fracking opponents to believe that if they make enough fuss they too may win a veto.”

DECC responded by saying: “The Government has said from the start that we will consult with local communities about the impact of fracking and we will continue to work closely with the Environment Agency (EA) and other regulators to ensure all operators abide by the strict rules that govern the industry.”

“It would appear that the Telegraph‘s editorial staff, browbeaten by the political muscle exerted by DECC, and have chosen to remove the article”, he said.

“This is not an isolated instance. As a result of pressure from the Government, and from the fracking industry’s PR/lobbying machine, the UK’s mainstream media [tend] not to carry many critical articles on this topic.”

Paul Mobbs’ article analyses the DECC press releases and accuses the department of a “distorted version of the facts, designed to manipulate the reality of what is taking place today”.