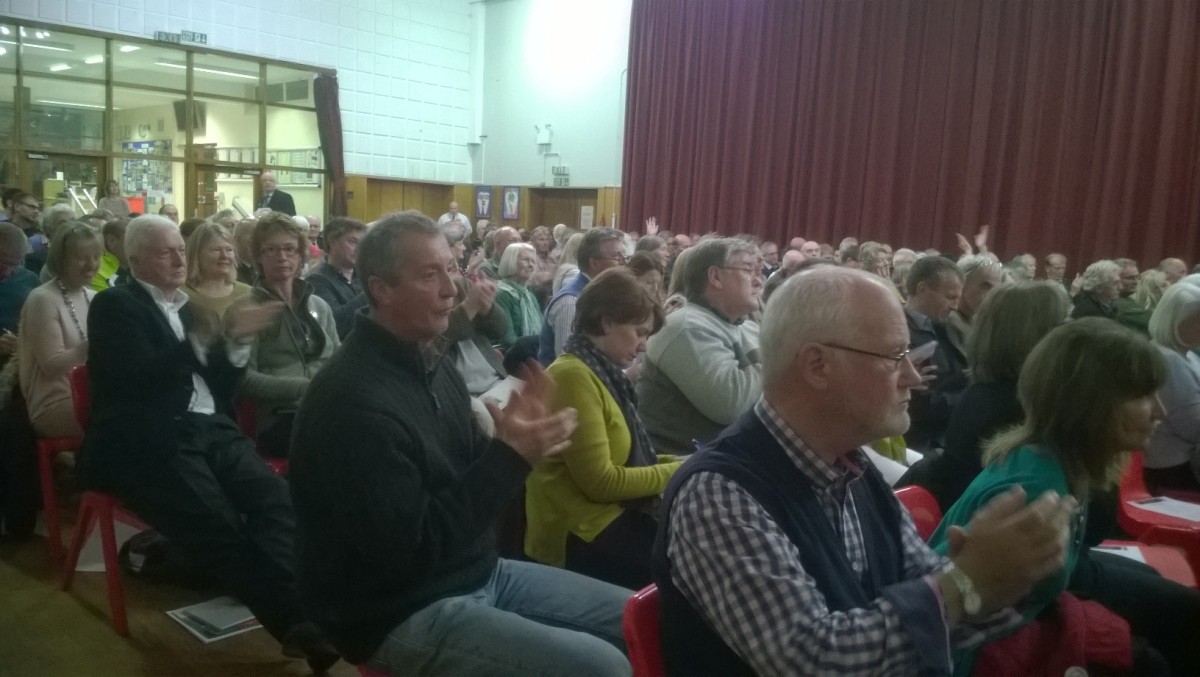 A bad—tempered meeting of 250 people in the North Yorkshire market town of Malton last night questioned the need and the desirability of fracking.

The meeting, organised by the Thirsk and Malton MP, Kevin Hollinrake, heard repeated calls to put on hold Third Energy’s plan to frack at nearby Kirby Misperton.

One woman said on her way out: “That’s the best argument I’ve heard so far for a moratorium”.

At times verging on chaos, the meeting heard allegations that local people were being used as guinea pigs in a fracking experiment and that the area was a “sacrificial lamb to corporate greed”. Mr Hollinrake, interrupted after just two minutes, occasionally struggled to keep order.

To loud applause, one questioner asked: “Is there going to be a red line that this government will recognise that we cannot cross?”

Referring to a US study that found greater numbers of premature births in areas of high fracking density, he said:

“We need to wait to look at this research better. What do we need beyond pregnancy damage and baby damage to put the brakes on this dash for gas?”

“We need to take a step back”

Another man asked why was the shale gas industry going ahead now when so much was uncertain. He said:

‘It needs further assessment’. ‘There’s not sufficient information’. ‘We need to look at it further’. ‘There’s no baseline data’. You don’t run a business like that. We need to take a step back.”

Another questioner referred to bankruptcies among US shale companies and the predicted higher costs of extracting shale in the UK.

“Why are we persisting? It is clearly not going to work. And if it does work they [the companies] will be quickly shut down.”

The meeting, open only to local people, heard from representatives of the Oil and Gas Authority, the Government’s Office of Unconventional Gas and Oil (OUGO), Public Health England, the British Geological Survey, Health and Safety Executive and the Environment Agency.

Not all the audience was opposed to fracking. The spokesperson for Friends of Ryedale Gas Exploration, Lorraine Allanson, was in the audience. But all the questions were either sceptical about fracking or hostile. And the audience was uncompromising about many responses from the panel.

“It starts with just one well”

When Mr Hollinrake repeated his call for a five-year strategic shale plan for Ryedale, some complained that this wouldn’t be ready in time for a decision on Third Energy’s plan to frack the KM8 well at Kirby Misperton.

Mr Hollinrake said KM8 was about “taking the next step and reviewing the implications of shale gas in the UK.” But some people shouted back: “It starts with just one well”.

Mr Hollinrake said he believed shale gas was a bridge to a low carbon future. But a questioner asked how he could reconcile tackling climate change with an entirely new fossil fuel industry that was, in his words, being developed under “the spurious and specious guise of energy security”.

One questioner asked what Ryedale and the UK would be like if thousands of wells were drilled.

Martin Christmas, a representative of the Environment Agency, replied: “We deal with well sites on a site by site basis.”

“What good is that?”, someone shouted from the audience.

“Because that is the best way to regulate, on a site by site basis, rather than hypothesis about what might happen”, Mr Christmas replied.

“I am not in charge of the public planning for Ryedale” he said.

He repeated his view that ten new sites that Third Energy had said it needed in Ryedale could be found in the district.

“What about other operators?”, someone shouted from the audience.

“No impact on tourism and agriculture”

In response to suggestions that fracking would industrialise Ryedale, Mr Holinrake said:

“It’s not what we do, it’s how we do it. If it is done in a way that does not industrialise the countryside and there is no environmental or visual impact from it then it will not affect tourism or agriculture.”

“Rubbish”, someone shouted from the audience.

One of the few women to ask a question said: “Would you be happy to like to live next to the KM8 well, yes or No?”

Professor Rob Ward, of the British Geological Survey, said: “If I was satisfied…”

“Yes or no”, asked the questioner”.

After a pause, Professor Ward said: “I cannot answer that question because I have not read in detail the planning application”.

Central government “has absolutely no clue”

Emily Bourne, of OUGO, said a Government requirement that councils rule on oil and gas applications in 16 weeks would ensure decisions were made “within reasonable time frames”. But one member of the audience said:

“If we are told it is reasonable for North Yorkshire County Council to make a decision on a pilot scheme this size in 16 weeks they have absolutely no clue in central government of what impact this is having on the council. This is a massive job.”

He asked Mr Hollinrake: “Will you use your influence within the Conservative government to say to them, on this occasion, will you give North Yorkshire County Council the opportunity to take longer so that that decision is not forced on people and it has a better chance of being done correctly.”

“Yes and I already have”, Mr Hollinrake said.

The audience appeared sceptical about what would happen if fracking companies went bust before wells were abandoned and sites restored. There was criticism of lower tax rates for the onshore oil and gas industry and cuts in research and development for renewable energy and energy conservation. There was also an apparent lack of trust in the regulators. When Mr Hollinrake asked the audience if it believed the Environment Agency was independent, many people shouted “No”.

After the meeting, some people described it as “bad-tempered”, chaotic and “a shambles”.

Adela Redston, of Frack Free Ryedale, said the presentations by the regulators had not been reassuring. “The level of awareness in Ryedale is now extremely high.”

“They are trying to push this application on us and expect us to lie down and take it.”

Di Keal, a member of Ryedale District Council, which voted last week in favour of a five year moratorium on fracking, said: “This evening did nothing to reassure me that the regulators in which our MP has such faith do in reality have the expertise or capacity to monitor the fracking industry.”

“The Environment Agency has been tasked with reducing its workforce by 14% by 2016, so how will they have the manpower to regulate fracking which would be a huge additional responsibility to their current workload.”

“We were told at the meeting that should this hugely damaging industry be allowed to come to Ryedale it will be effectively self-regulating, so what faith can the public have in the regulators – it is like asking students to mark their own exam papers”.

Mr Hollinrake disagreed that the meeting had been bad-tempered. He said: “People who turn out on a rainy Monday evening are likely to have real worries.” He said some people would not change their minds but he was glad he had organised the meeting.

“I am not afraid of the political flack This is very contentious. I have kept an open mind up until now. I think the right thing to do would be to take a modest first step and drill a well so that we have our own data to judge the impacts.”

I was delighted and encouraged that there was a huge turn-out of constituents who were keen to know how Ryedale and its residents will be safeguarded with regard to Hydraulic Fracturing in Ryedale.

Kevin is obviously sensible about our country’s energy requirements and security with the need to explore our own gas reserves to see if they are extractable and viable. By chairing the evening it showed that he is genuine in pursuance of strong regulation for the safety of his constituents, industry workers and the environment

Kevin Hollinrake has certainly worked hard to discover the truth about Hydraulic Fracturing. After last night event I know we can all be reassured that Ryedale is being safe guarded like no other time in history and all eyes will be watching the industry as it develops.

Updated on 14/10/15 to include comments from Kevin Hollinrake and Lorraine Allanson.