The latest results of the ongoing Nottingham University study, Public Perceptions of shale gas in the UK, found a significant drop in the level of support for shale gas extraction. And support among women has fallen to 31.5%.

More people said they supported shale gas extraction (46.5%) than opposed it (36.1%). But the level of opposition was highest and support lowest since this question was first asked in June 2012.

According to the findings, support was 10.4% higher than opposition, down from a peak difference of 39.4% immediately before anti-fracking protests at Balcombe in July 2013.

The latest survey, conducted during September 2015, found a big difference between the attitude of men and women. 58% of men were in favour of shale gas extraction, compared with 31.5% of women. The report concluded:

“Over the last 12 months there has been a significant shift in how the UK public views shale gas.”

“A growing number of people are opposed to its extraction and use in UK. The driver behind this shift is a firming up of views on shale gas particularly amongst women, who as a group believe that shale gas will have significant environmental impacts and importantly will result in contamination of drinking water.”

“If the government pushes forwarded with its plans to fast track shale gas developments in the UK it must be prepared for significant levels of opposition from grass roots activists.”

“These trends suggest that the sense of unease with the environmental implications of fracking is a very live issue for the British public”, the report concluded.

In September 2014, support increased slightly and opposition fell, with a rise in the number of don’t knows. But in September 2015, the reverse happened. Both the proportion of don’t-knows and the difference between supporters and opponents were the smallest in the survey so far. 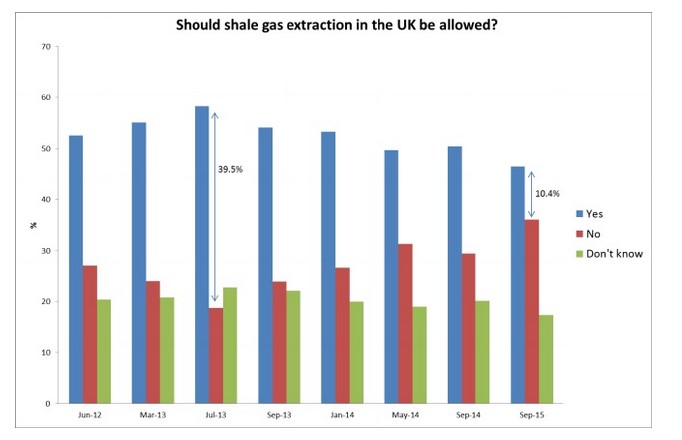 Public Perceptions of shale gas in the UK, Nottingham University

Shale and drinking water contamination The latest figures put the proportion who associated shale gas extraction with contamination of drinking water at the highest level so far. 48% agreed, 29% disagreed and 22.9% didn’t know. Comparable figures for July 2013, just before the Balcombe protests were: 35.2% (yes), 29.8% (no) and 35% (don’t know). The report said:

“These findings suggest that as people hear more about shale gas and the way in which it is extracted they are more persuaded that shale gas extraction will have a deleterious impact on drinking water.” 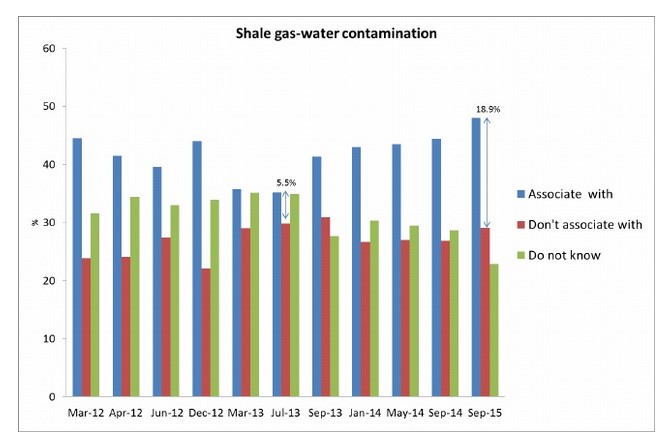 Public Perceptions of shale gas in the UK, Nottingham University

Shale gas and earthquakes The proportion of people who agreed that shale gas extraction was associated with earthquakes peaked in April 2012 at just under 70%. In the latest survey, the figure was 48%.

Shale and energy security In September 2015, 47% associated shale gas extraction with energy security and just over 30% did not. This is the smallest gap between support and opposition on this issue in the survey so far. In Jan 2014, 61% agreed and under 20% did not.

Shale and economic benefits People surveyed still strongly believe shale gas extraction will benefit the economy (just under 60%) but there’s been a small rise in those who disagree (from just under 20% in January 2014 to about 24% in September 2015).