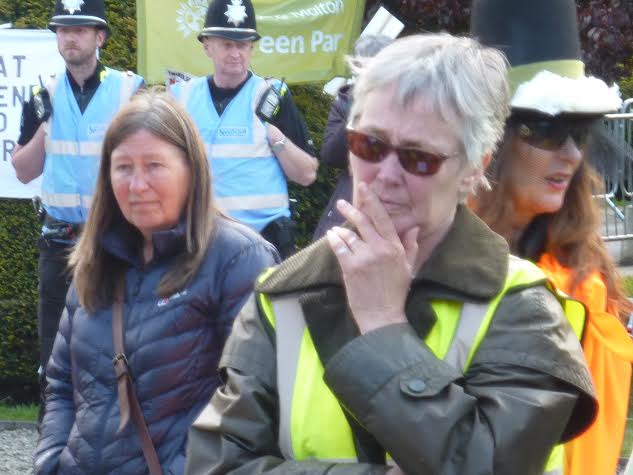 Hearing the result outside County Hall in Northallerton

Opponents of fracking vowed to continue their fight following the approval by North Yorkshire County Council of what could be the first fracked well in the UK for over five years.

At just before 7pm, the council’s planning committee voted by seven to four in favour of Third Energy’s application to frack its existing well at Kirby Misperton in Ryedale. The decision, after two long days of evidence and discussion, came despite more than 4,000 objections and a petition of more than 2,500 signatures.

Campaigners against the proposal, more than 70 of whom addressed the committee, promised the fight wasn’t over.

Friends of the Earth and the local group, Frack Free Ryedale, said they were considering a judicial review.

Sue Gough, from Little Barugh (above), launched a people’s declaration opposing fracking. She told the crowd that had waited all day for the result outside county hall at Northallerton:

“Today we resolve to continue to fight to remain free from fracking, to protect our communities, our beautiful countryside, our air and water, and to protect the future of the planet. We ask people across the country to join us by supporting this declaration.”

She said: “We are extremely disappointed that North Yorkshire County Council has not listened to the overwhelming wishes of the locally elected representatives of Ryedale and local people and has approved Third Energy’s application to frack in our county.

“This decision is not in our name. We know that Third Energy and their backers Barclays bank are the only ones that stand to benefit from these fracking plans. This application would put at risk Yorkshire’s beautiful landscape and the tourism industry that inspires millions of visitors each year and supports thousands of jobs.

“We have a positive democratic vision for Yorkshire and the UK with thriving rural economies, clean air and water, producing the green energy like solar power we need to protect our children’s future, and creating the thousands of green jobs along with it.

“We urge and will support the Government to develop a balanced long term energy policy that will achieve our globally agreed climate change targets.

Cllr John Blackie, a late substitute on the planning committee, (above) made the strongest criticism of the application during the meeting. He told councillors:

“I expected greater scrutiny and challenge from this planning authority. We have been too easily satisfied and we haven’t gone the extra mile to ensure that this stacks up. I don’t think it does.”

After the decision he told the crowd:

“I am very sorry that you are going home tonight disappointed”

He urged opponents of fracking to fight every future application with the same passion that they fought this one. “The next time around I will be there supporting you all the way.

Fellow councillor, Lyndsay Burr (above), who represents Kirby Misperton, said: “This is not the end. We will continue to fight. Ryedale wil not be known as the fracking capital of Yorkshire.”

Simon Bowens, the Yorkshire campaigner for Friends of the Earth (below), said county councillors had “turned their back on their local community” and “allowed this dirty dangerous industry to come into our beautiful place.” 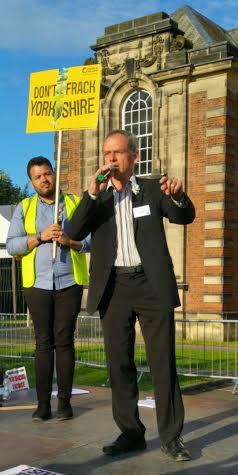 “That’s one well. One well is where it stops. We will struggle and we will fight to ensure that that is all.

“We will regather, we will bring ourselves together to make sure that we build the movement community by community, street by street, house by house to make sure that not just four thousand people, not just twenty thousand people but the whole of North Yorkshire is with us in our struggle to keep our beautiful county the way we like it – clean, healthy, economically vibrant with a great quality of life for the people who live there.

“Friends of the Earth will be with you every step of the way on that.”

Jake White, the legal officer for Friends of the Earth, said of a judicial review:

“It is always a possibility. There is work to do to go through the decision and talk to people who might be interested. There are routes that are worth looking into in the planning officer’s report.”

“The council made mistakes. It is not over yet. We will fight on. We have an opinion from a barrister. We will be guided by our legal team over the next few weeks. There are a lot of things that we are concerned about the process.”

He added: “There are a lot of people talking about civil disobedience: that’s families and local residents. Families are determined to stop this.

“It has come down to fight or flight. People are already starting to leave Ryedale. People don’t want Ryedale to become a sacrifice zone.”

“We have lost the battle but we have not lost the war. It is time to get political. We have to be prepared to put ourselves up for election. If we won’t they will walk all over us.”

And a campaigner against Cuadrilla’s plans to frack in Lancashire, Gayzer Frackman, said:

Live updates from the committee

Breaking news of the result

Approval is one step, says industry