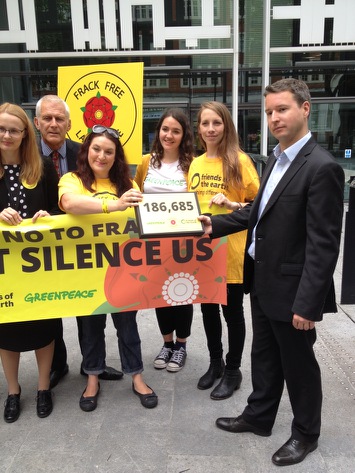 A petition of 186,000+ names was delivered to Downing Street and the Department of Communities and Local Government this afternoon calling on government to respect the refusal of fracking plans in Lancashire.

In June last year the county council rejected Cuadrilla’s application to frack up to four wells each at Preston New Road and Roseacre Wood in the Fylde area of Lancashire. After the company appealed, the schemes were examined at a public inquiry. The local government secretary, Greg Clark, will decide the applications, probably this summer.

Lancashire opponents of fracking delivered copies of the petition to Mr Clark and David Cameron in the past hour. They were joined by the Labour MP for Lancaster and Fleetwood, Cat Smith, and the campaign groups, Greenpeace and Friends of the Earth.

“We are asking Mr Clarke and Mr Cameron to recognise our democratic right to have the decision to reject fracking at this site made by Lancashire County Council upheld.

“As residents, we have followed due planning process and our community has made it clear there is no social licence to proceed here.”

“Roseacre Awareness Group are humbled by the strength of public feeling and would like to thank the many thousands who took the time to sign this petition.

“This is not just about fracking and fossil fuel extraction; it is about local democracy and local communities being empowered.”

In a joint statement, campaigners Hannah Martin, of Greenpeace, and Rose Dickinson, of Friends of the Earth, said:

“We are here today on behalf of more than 150,000 people who have stepped up to defend Lancashire’s democratically-made decision to say ‘no’ to fracking.

“We are asking David Cameron and Greg Clark to stand by their commitment to local democracy, by respecting the decision of Lancashire County Council – a decision supported by local residents, businesses and councillors.

“Fracking poses risks to people and the environment, and politicians in Westminster shouldn’t force this risky technology on any community.”

“Fracking is not the answer to the question of climate change and how we meet that challenge, nor does it have a democratic mandate in Lancashire.

“When I have been asking questions in Parliament in the past few weeks about the risk to jobs in tourism, no one has any answers to that either.

“I’m proud to stand up for my constituents, their jobs and our planet by joining Greenpeace and Friends of the Earth handing in this petition.”

“As with previous petitions organised by Greenpeace and Friends of the Earth I very much doubt the majority of the signatories claimed are from people in Lancashire or indeed all based in the UK.

“Our right to appeal is a fundamental part of the same local democratic planning process which, just last week, allowed Friends of the Earth to legally challenge a decision of planning permission granted for fracking by North Yorkshire County Council.

“These processes are available to all and it is not for people or organisations to cherry pick just the parts that deliver the outcomes they like.”

Updated 16/6/16 to include Cuadrilla statement