Tina Rothery, from the Lancashire Nanas group, has been found guilty of contempt of court for refusing to provide officials with information about her finances in a legal dispute with the shale gas company, Cuadrilla.

She has been told she will go to Styal Prison in Cheshire for 14 days unless she provides the information at a hearing in Preston on 9 December.

Ms Rothery’s case dates back more than two years to August 2014 when she and a group of women campaigners occupied a field for three weeks. They were protesting at Cuadrilla’s plans to frack a site nearby at Little Plumpton.

The company and a group of landowners went to the High Court to seek a possession order for the occupied field. They also sought an injunction preventing anti-fracking groups visiting a range of places in the Fylde area of Lancashire.

Ms Rothery asked the court for an adjournment to allow campaigners to challenge the injunction. But when she offered no evidence at the next hearing she was ordered to pay £51,594.53, part of Cuadrilla’s costs.

She has refused to pay and interest at 8% has been added to the sum.

“This is about deterring activists”

In June this year, she also refused to provide information to the court about her finances. In a statement to officials, she said:

“I feel in this case that our law courts are not being used to seek justice but instead being applied like a weapon and a threat against peaceful protest.

“As this case has nothing to do whatsoever with justice, I will not be complying with any request for information or payment.”

“This is an abuse of our system of justice. This is about deterring activists and making examples”.

During a protest in September, Ms Rothery was served with papers which said she had been found in contempt of court and would be sent to prison for 14 days.

She said of next month’s hearing:

“This is the day when I go before the judge and explain why I am not cooperating with their request to fill in forms.

“This is not even about the activism – it is now about court rules of engagement and the expectation/insistence that I comply or face prison for 14 days.

“My options are to pay, to sort a payment plan, to declare bankruptcy or to stick with my moral core that says this is not about law or justice. It’s about the ones with the power, money and expensive lawyers, using our laws against us in court. It is impossible for anyone up against the powerful to be able to afford justice.”

Cuadrilla said the latest request to appear in court has nothing to do with the company but was a matter between Ms Rothery and the courts.

Officials postponed a similar hearing in Blackpool arranged for 19 October for “safety and security issues which may arise at the hearing”. 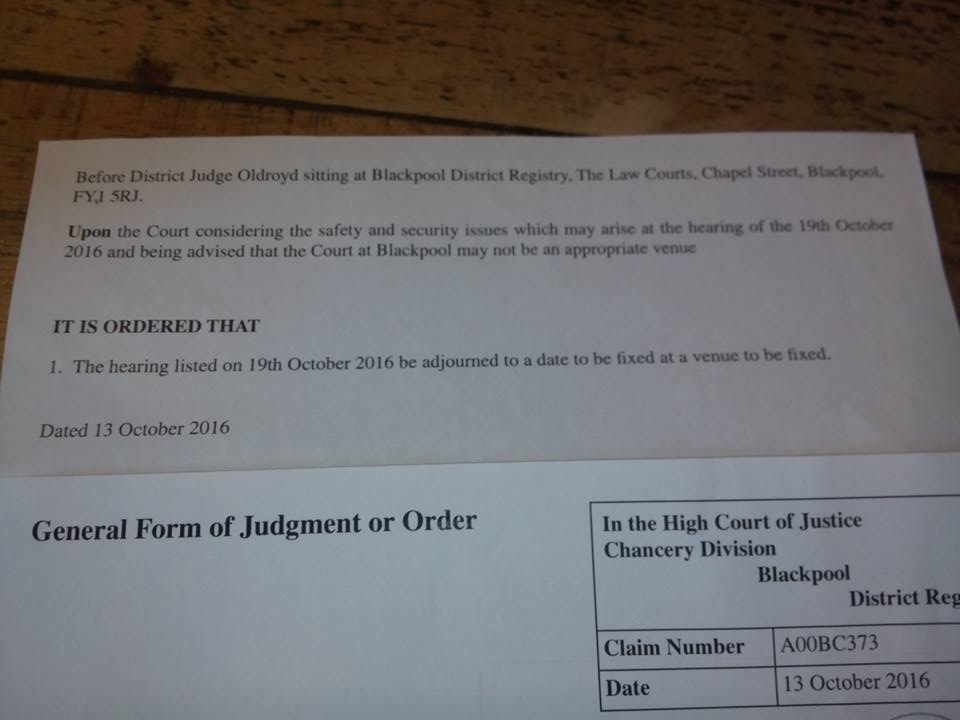