The Environment Agency is inviting comments on permit applications by Europa Oil & Gas for its exploration wellsite near Leith Hill in Surrey.

Europa has applied for environmental permits regulating mining waste, radioactive substances and the storage and handling of crude oil.

The company has said it does not need permits for industrial emissions because the volume of gas it expects to flare will be less than 10 tonnes/day. It is also not applying for a water discharge permit.

The consultation period opened today and runs until Tuesday 16 May 2017. Comments can be made online (link to consultation web page) or at Environment Agency offices at Orchard House, Endeavour Park, London Road, Addington, Kent.

The site, known as Bury Hill Wood or Holmwood, received planning permission in August 2015 for site construction, drilling, testing, abandonment and restoration, all to be completed in 18 weeks. Europa is currently negotiating with Surrey County Council over the final conditions of the planning permission.

DrillOrDrop has reviewed the permit application documents and compiled the following information from them.

Location: 1.5km west of South Holmwood, 3.5km south west of Dorking in the Surrey Hills Area of Outstanding Natural Beauty (AONB), at a height of 220m

Utilities on site: None

Principal aquifer: Hythe Formation in the Lower Greensand Group supplies public supply boreholes at Dorking and industrial and private domestic users. Groundwater in the Hythe formation is “very close to the site”, estimated at 25m below ground level, and supports flows to local springs

Secondary aquifer: Tunbridge Wells and Ashdown Formations (445-745m depth at the site) and Limestones in the Lulworth Formation (800m below the site)

Nearest surface water: The site is in the catchment of the Pipp Brook, 250m west of the site, which is supplied by groundwater from springs

Abstraction licences: Five groundwater and five surface water abstraction licences within 5km of the site. These include a licence held by Sutton & East Surrey Water PLC which has five boreholes for public water supply at Dorking.

Water supply to the site: By road tanker

Drilled in five sections, with a total length of 1,300m, south west from the wellsite to land under the village of Coldharbour. The well will reach a true vertical depth of 1,450m

“Europa Oil & Gas will, if applicable, demonstrate that an enclosed flare is not suitable for their operation and there will not be a worse environmental impact as a consequence of applying the alternative [shrouded flare] technique.”

If the well is not successful it will be abandoned and the site restored to former use. 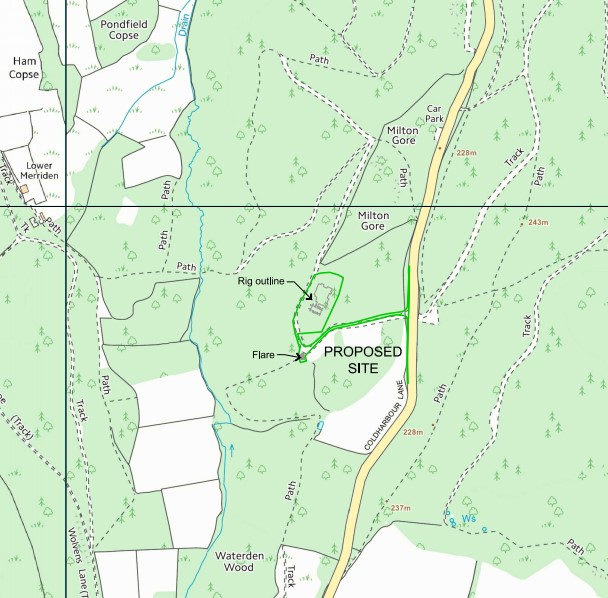 A risk assessment by Envireau Water in 2015 concluded there was a minor risk to the Hythe Formation aquifer during wellsite construction and restoration. But it said

A scheme for monitoring groundwater, also produced by Envireau Water in 2016, concluded the Sutton & East Surrey Water boreholes were not at risk from the development.

It proposed to monitor groundwater at three boreholes and surface water at two features. Baseline monitoring of ground and surface would be carried out for at least three months before the development starts, the application said.

“Whilst the introduction of hydrochloric acid to the formation is a groundwater activity, it is anticipated to be considered de-minimis by the Environment Agency, due to the low volumes proposed and once the hydrochloric acid has reacted with the formation the remaining near neutral solution is circulated back out of the well.”

The application assessed the risk of odour as “negligible”. It identified 60 homes, 0.53km-1.94km from the site, as being highly sensitive to smells from the operations.

“It is envisaged that the local community will not be familiar with some of the potential odours from the exploratory operations conducted at the Holmwood wellsite and therefore any odours emitted from the wellsite will be classed as offensive.”

But the company added:

“Given that all operations are temporary and that the exploratory operations, which will give rise to the highest potential for odorous emission, are also for a temporary nature the impact on the local receptors is classed as minimal.”

“All site personnel will conduct periodic sniff testing during their shift and are to report odours perceived to be strong or odours not associated with standard wellsite operations”.

Point source sampling would be undertaken when the substance causing the odour could be determined. Residents who complained about smells may be invited to keep an “odour diary” throughout operations at the site, the company said.

Noise and vibration from engines or vehicles: Low if management techniques were effective

The following risks are considered not significant