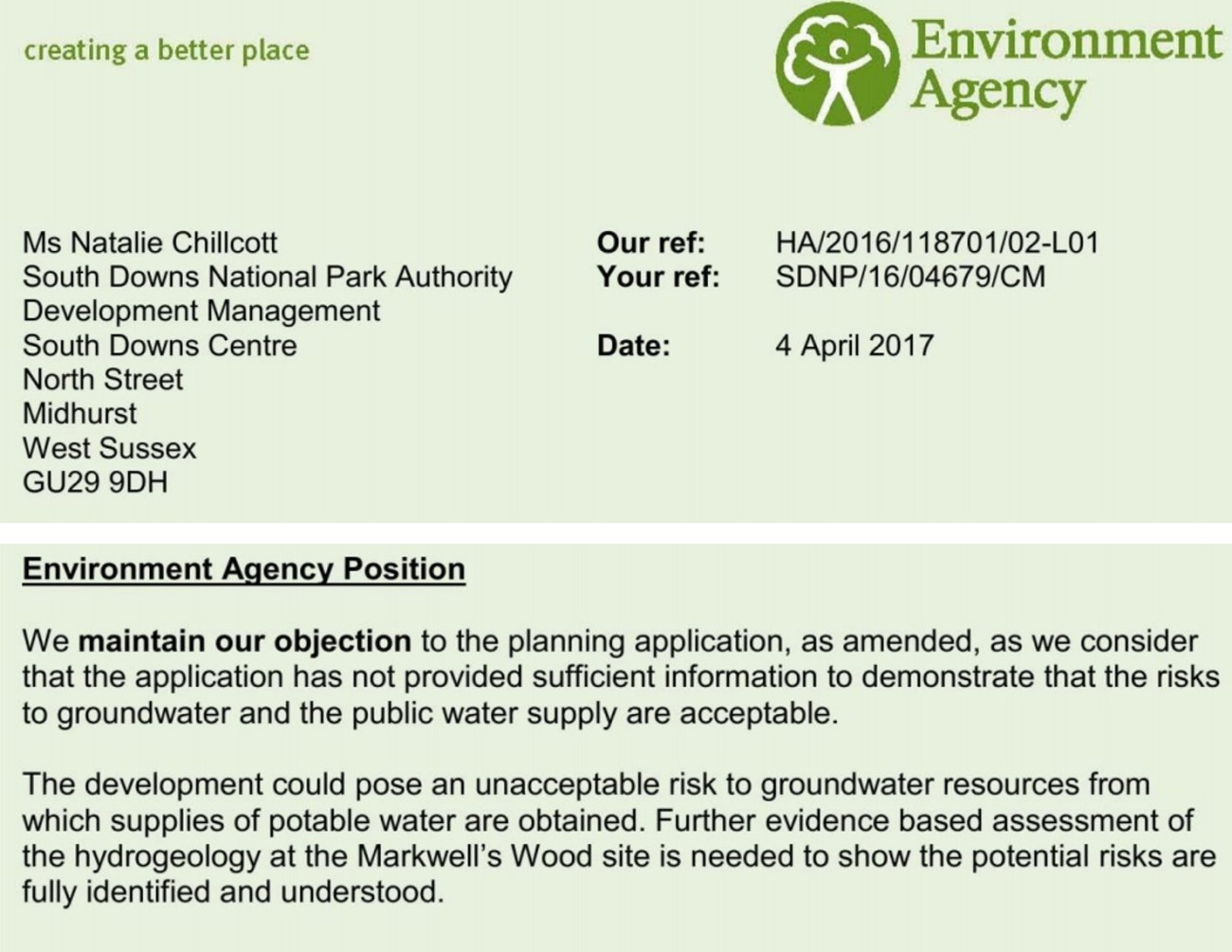 In a response published this evening, the organisation said it was maintaining its objection to proposals by UK Oil & Gas Investments plc for its wellsite at Markwells Wood, near Rowlands Castle. The company wants to drill four new wells at the site and produce oil for 20 years

UKOG produced a revised risk assessment last month (March 2017). The author, Envireau Water, concluded that the risk of operations at the site to groundwater was low or very low and no greater than drilling a conventional water well.

But the EA said:

“We maintain our objection to the planning application, as amended, as we consider that the application has not provided sufficient information to demonstrate that the risks to groundwater and the public water supply are acceptable”

“The development could pose an unacceptable risk to groundwater resources from which supplies of potable [drinking] water are obtained. Further evidence based assessment of the hydrogeology at the Markwell’s Wood site is needed to show the potential risks are fully identified and understood.”

“In the absence of adequate information, we adopt the ‘precautionary principle’ to manage and protect groundwater and the public water supply. We recommend that planning permission should be refused.”

The Markwells Wood site is in the catchment area of the Bedhampton and Havant Springs, 8km away, which supplies drinking water to about 200,000 people in the Portsmouth area.

The EA said there was a “significant possibility” that a network of underground fissures in the chalk could allow groundwater to flow rapidly from the site to the springs. It said:

“There is a risk that should groundwater become polluted from either surface or deep activities associated with the development there would be little opportunity to intercept the pollutants before they reach the public supply”.

The EA said the revised risk assessment failed to provide site-specific evidence to support the conclusions and a number of uncertainties remained.

“We consider these uncertainties to be significant in the decision-making process and as such we are adopting the precautionary principle in our response”.

The company’s risk assessment has also been strongly criticised in an appraisal commissioned by Markwells Wood Watch, a community group which opposes UKOG’s plans.

“Several serious misinterpretations and omissions undermine the credibility of the conceptualisation and thus the basis of the risk assessment”.

The EA said UKOG’s risk assessment had not adequately addressed research on the area by the British Geological Survey. This concluded that there were likely to be connected underground networks of enlarged fissures and conduits in the Markwells Wood area, through which groundwater flowed to the Bedhampton and Havant springs.

The risk assessment had argued that these features, known as karstic, were less frequent at Markwells Wood than other parts of the area. But the EA said there was possible evidence of these features near the site. It said research suggested groundwater in the area could travel rapidly, sometimes up to 6km in less than 48 hours.

Dr Foley and the EA said the risk assessment should have discussed the loss of drill fluids during construction of the existing well at Markwells Wood in 2010. Dr Foley said there were significant drilling fluid losses in the Upper Chalk section of the well at 131m and 231m below ground level. The site operator had to introduce aggregates into the borehole to stop the loss at 131m, so the cavity must be sufficiently large to transport drilling fluids away from the well, Dr Foley said.

Dr Foley also argued that the risk assessment was based on generalisations about how water moves through chalk.

“There is a consistent downplaying of the groundwater vulnerability”, he said.  Some information was misinterpreted and the potential significance of dry valleys around the site had been dismissed. Dr Foley added:

“It is unreasonable to conclude [as the risk assessment did] that the UKOG site locality is hydrologically isolated and very different from elsewhere in the catchment”.

“We maintain the application, as submitted, continues to be inconsistent with national and local planning policy.”

Paragraph 109 of the National Planning Policy Framework: planning decisions should ensure that new developments do not result in unacceptable levels of water pollution

Policy 16 of the West Sussex Minerals Local Plan 2003: appropriate measures will be required for safeguarding the water environment during working

Policy M16 Draft West Sussex Joint Minerals Local Plan 2016: mineral development will be permitted provided that they would not cause unacceptable risk to the quality and quantity of water resources or causes changes to groundwater

Policy SD15 of the South Downs Local Plan: Development proposals that comply  with other relevant policies will be permitted provided that they safeguard groundwater aquifers from contamination.

Other comments and decision date

The South Downs National Park Authority’s planning committee is expected to consider the Markwells Wood application at a meeting on 11 May. The authority has said it will take comments up to the date of the meeting.

As well as the recommendation to refuse from the EA, the authority has received objections in the past few days from its own landscape officer, Markwells Wood Watch, Stoughton and Rogate Parish Councils and Sussex Wildlife Trust.

Link to planning application  (click on documents for responses)