About 150 people heard calls last night to object to oil drilling, expected in the next few weeks, at a farm near Billingshurst in West Sussex.

A packed public meeting at nearby Pulborough was standing room only as residents were urged to contact their local MPs and councillors to try to block the work.

UK Oil and Gas (Investments) plc has planning permission for exploratory drilling at Wood Barn Farm, Broadford Bridge, and is currently applying for a variation of its environmental permit. The company has said it would drill the well in the second quarter of this year (April-June). Planning permission expires in September 2017.

The meeting had been organised by Keep Billingshurst Frack Free and was chaired by actor Sue Jameson, who lives in Sussex. UKOG did not attend but supplied literature to the event. 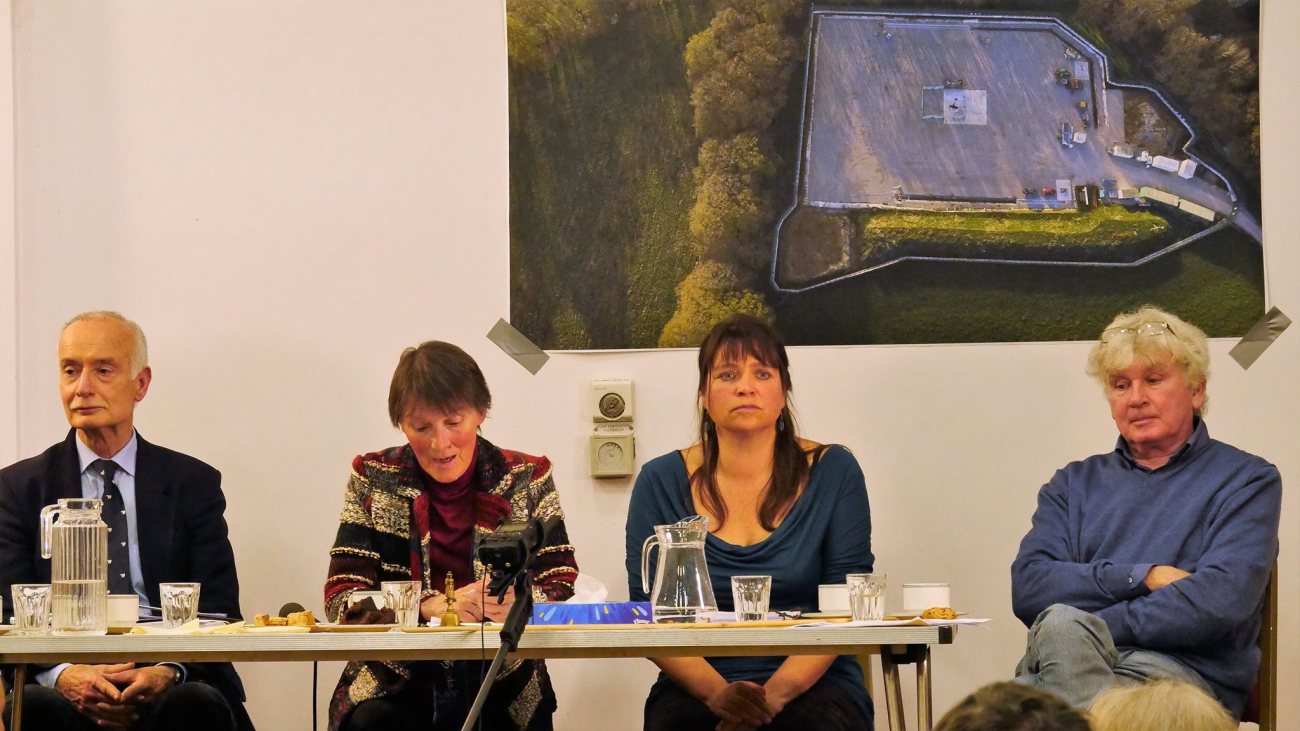 She told the meeting:

“There could be four to eight wells per sq mile in this area. We are not just talking about one well, like Storrington. If we don’t stand up and say no we are all complicit in climate change.”

Ms Peel said every member of West Chiltington Parish Council had objected to the variation of the environmental permit.

“They said they felt the wool had been pulled over their eyes. A lot of information had not been given to them. When they were given the full story, they objected.”

Ms Peel also criticised mistakes in UKOG’s permit application. It had said people would be taken to Horsham Hospital in an emergency but the hospital had no accident and emergency department.

The application also said there were no designated habitat sites in the immediate vicinity of the site and no protected areas within 10km.

But another speaker, Dr Roger Smith, a trustee of the Sussex Branch of the CPRE, said the closest area of ancient woodland was 150m from the pad and there were at least were six Sites of Scientific Interest within 10km. He said:

“This is a most unfortunate mistake”.

“They [UKOG] are not dotting the Is and crossing the Ts. That does not give us confidence.”

She told the meeting that West Sussex County Council had granted planning permission in February 2013 on the basis of an environmental statement which said the well would explore for gas in a sandstone reservoir. UKOG’s subsidiary, Kimmeridge Oil and Gas Limited, now said it would be exploring for oil in Kimmeridge limestone. Dr Sutcliffe urged the audience:

Dr Smith said the permit application should be refused and there should be another planning application with a new consultation process.

Another speaker, Emeritus Professor David Smythe, questioned whether drilling for oil in the Weald was a conventional operation, as the companies claimed, and whether it was economically viable.

“This industry will fall apart as long as you object to it every step of the way. You will be doing them a favour in the long-run”.

UKOG refutes arguments opposing its Broadford Bridge plans. It distributed a letter and fact sheet to local homes before the meeting (see links below).

The company said it would not attend the meeting because it would not be “guaranteed a fair hearing”. But before the event two people working for the company delivered literature to the village hall, accompanied by two police officers.

David Smythe’s Ten questions to be asked about Broadford Bridge