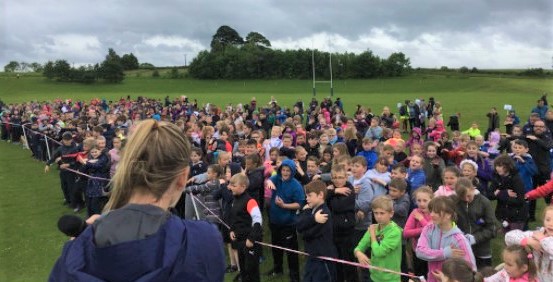 Schools in an area of Derbyshire where INEOS wants to explore for shale gas severed their link with a sports campaign formed by the company’s owner after complaints from parents.

A children’s run held in Chesterfield earlier this week went ahead without the involvement of the INEOS Go Run For Fun charity.

The event, at Mount St Mary’s College, Spinkhill, was organised instead by the Chesterfield and North East Derbyshire Schools Sport Partnerships.

A spokesperson for the college said the connection with the INEOS Go Run For Fun organisation was ended because of concerns about the company’s plans in the area.

One parent whose child was running in the event on 6 June said she wasn’t happy about the connection with INEOS and wrote to the head teacher.

A school in Dronfield emailed parents before the event:

“You may or may not be aware that the Great Run company who organise the events are sponsored by INEOS (the fracking company). Concerns over this link, from parents and schools, were raised with the NED [North East Derbyshire] School Sport Partnership team who have, in turn, raised concerns with National School Sport Partnerships. As a result NEDSSP have now severed all ties with the Go Run for Fun Event and therefore INEOS”. 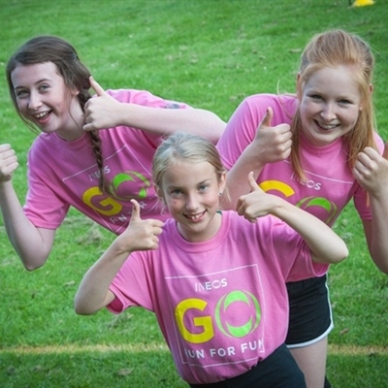 Go Run For Fun says it was formed to inspire children to be more active. According to Go Run For Fun, the programme began in 2013 and since then more than 190,000 children have taken part in events in the UK, France, Germany, Belgium, Switzerland and the USA.

“The Go Run For Fun Foundation has been supported by INEOS and its founder, Jim Ratcliffe, driven by a personal belief that promoting the health and well-being of young people is a critical responsibility for INEOS and our wider society”.

DrillOrDrop asked the Chesterfield and North East Derbyshire School Sports Partnerships to give more details on the decision to break the link with INEOS Go Run For Fun. We will update this post if they respond. We also asked Go Run For Fun and a local parent for their reactions. Go Run For Fun referred us to INEOS. We have included their comments in full, received before the event happened.

A spokesperson for INEOS said:

“INEOS is extremely disappointed by the actions of a handful of individuals in association with anti-fracking groups that have threatened disruption at the GO Run For Fun run to be held at Mount St Marys College, Chesterfield on the 6th June.  These people are misguided. Their ‘bully boy’ tactics have put inappropriate pressure onto primary schools with the sole aim of preventing 1500 young children from taking part in an event that can only improve their health and wellbeing.

“This fun run is the culmination of a six week GO Run For Fun programme that teaches children between the age of 5 and 10 years old to have fun being active. 17 schools, 40 ambassadors and 1500 children are currently three weeks into learning about healthy eating, team-work and the benefits of being active. To threaten to disrupt the run that so many children are looking forwards to, is deplorable.

“It is disgraceful that a number of small anti fracking groups to have threatened disruption at these fun runs and put undue pressure on schools, which have little option but to make alternative arrangements to protect their children if they are to continue to stage the event.

“Go Run For Fun is not linked to INEOS Shale or any particular INEOS businesses and has no purpose other than raising awareness in children of the benefits of an active lifestyle. It was established four years ago and is today the world’s biggest children’s running charity. Its sole aim is to help improve the wellbeing of young children, to encourage them to start running and live fitter, healthier lives. It is supported by Government, sportsmen, health experts, teachers and hundreds of thousands of normal people who want to help their kids to become more active.

“Jim Ratcliffe [the owner of all the INEOS companies] is passionate about getting children to be more active from an early age and he contributes to the programme because he wants to actively address the issue of childhood obesity that is affecting children from an increasingly early age. INEOS is very proud to have enabled over 180,000 children to take part in the event, which is why we have put our name to it.

“GO Run For Fun makes no reference to INEOS products or services that make a significant contribution to saving life, improving health and enhancing standards of living for people around the world.

“These pressure groups should bring their grievance directly to us if they have an issue, not bully teachers, governors and young children. INEOS Shale hold many public meetings to discuss the benefit that shale gas will bring to the prospects of communities across the UK. Those that object to this aspect of our business should share their views at these meetings and not threaten primary schools and young children as they are here.”

“I’m not at all surprised to see INEOS describe people who object to their PR stunts in this way, after all, the best form of defence is often thought to be attack.

“INEOS’s PR spokesperson is trying to make us out to be strident activists, and that we are supposedly up for threatening people and spoiling children’s fun if we don’t get our own way. This is totally untrue.

“The people I have spoken to on this subject are teachers, cleaners, stay-at-home parents, doctors, solicitors, chefs, IT engineers, retail workers, small business owners, nurses, and so on, but most of all, we are parents.

“My sole aim (and many other people’s who objected to this) was to stop my child from being used as a tool for INEOS’s brand acceptance strategy. Last year, my eldest daughter ran in a local Go Run for Fun, before I was aware of its links to INEOS. I was extremely annoyed when she returned wearing the bright pink t-shirt with INEOS clearly printed above the GRFF logo, so to say that is not linked to an INEOS label is disingenuous.

“I am not aware of anyone threatening to disrupt the run, and know that when I asked local groups what I should do, there was general agreement that disruption was not the way forward, but that raising awareness of the INEOS link by contacting teachers, head-teachers and governors of schools was a good strategy for action.

“I therefore wrote a short letter to the head-teacher, pointing out the event’s link to INEOS who were planning to frack in the area. I enclosed a leaflet about the 10 myths of the fracking industry, from Frack Free South Yorkshire, and asked her to look at INEOS’s safety record of late. I also explained that I wasn’t happy about my daughter taking part in this event. No threats, no promises, just statements of fact.

“Considering the strength of local feeling about the planning applications for exploratory drilling recently submitted at Bramleymoor Lane and Harthill, the timing of this race was very badly judged by INEOS. To use children as a marketing ploy in any way but particularly as part of their brand acceptance strategy, to reflect INEOS’s own words back at them, is disgraceful and deplorable.

“For me, the outcome of this is perfect. Parents have been told that the fun run will go ahead, but not under the Go Run For Fun label. Our children still get to enjoy participating in a fun and healthy even, but without being used by INEOS in their ever elusive chase for the social licence to frack.”