An eviction is underway at a protection camp at the site earmarked for Europa’s oil exploration well at Bury Hill Wood, near Leith Hill in Surrey. We’ll be updating this post with information as it comes in. The camp was established on 28 October 2016 and an eviction order was issued by the High Court on 23  January 2017.

People in tunnels have been underground for more than 16 hours.

Images from throughout the day

Thanks to Dan Harvey for permission to use pictures below

Thanks to Kim Tee for permission to use pictures below

No reported arrests or extractions from tunnels.

Statement from the Forestry Commission:

“Genuine visitors to the public forest at Bury Hill are not affected by the Europa Oil and Gas court order, which applies solely to those on land the company has leased. Our work to manage the rest of the forest is also unaffected.” 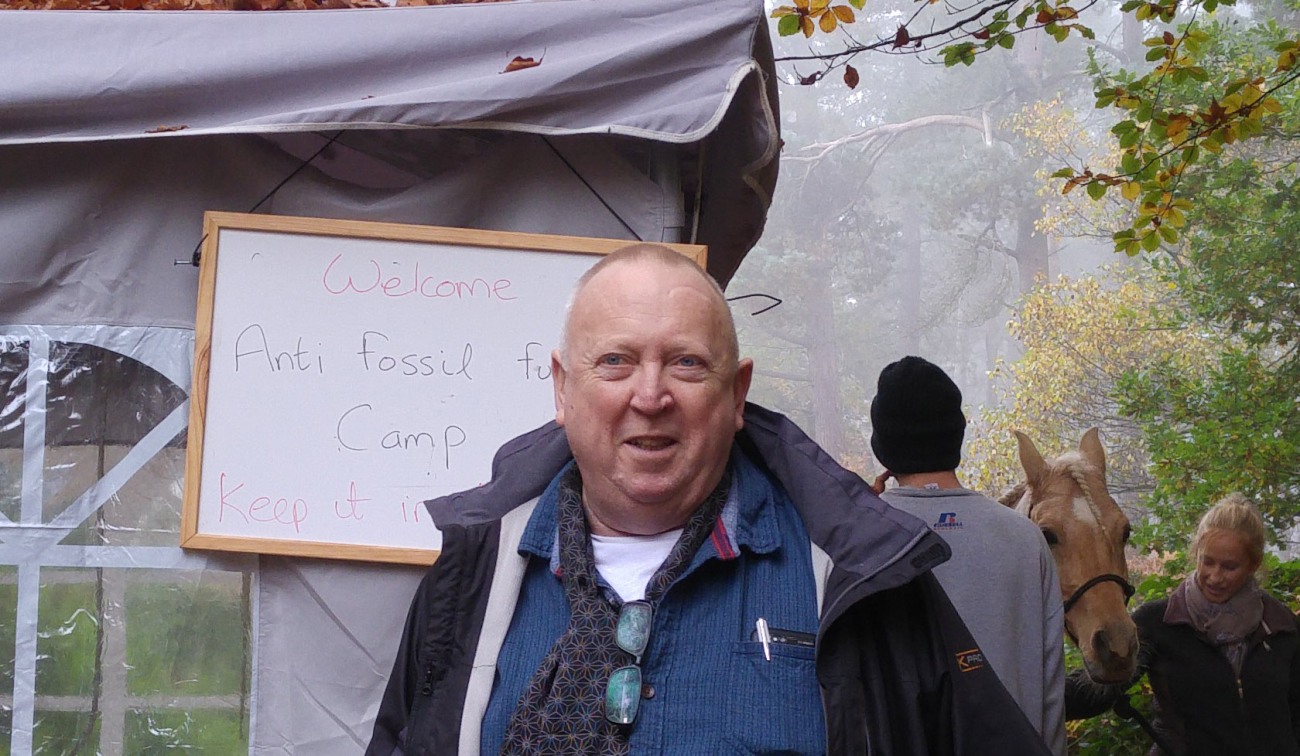 Keith Taylor MEP during a visit to the camp in November 2016. Photo: DrillOrDrop

“The extraction of oil at Leith Hill risks damaging our local environment and health and it is absolutely right that local residents and environmental activists should be concerned.

“When I visited the protection camp in November, I was very impressed by the courage, fortitude and dedication of the people living there who have literally placed their lives on hold to be on the frontline of the fight against fossil fuel extraction and the new and little understood technologies planned for extracting tight oil in the Weald Basin, including horizontal wells and matrix acidisation.

“Profit driven oil companies like Europa might be happy to gamble with our future and our environment but I am not.

“Peaceful, non-violent direct action is often the only means of protest left available when the government consistently fails to listen to the legitimate concerns of ordinary people.

“Despite the very clear opposition to oil exploration in the Weald, permission to drilll an exploratory well in this pristine ancient woodland was granted on appeal by the planning inspectorate, ignoring the views of many of the local people.

“When the democratic deficit is this great, people are left with only one option – peaceful protest, as is their right.

“It is of paramount importance to democracy itself that this right is facilitated by the police. The safety and wellbeing of the protesters currently in tree houses and locked-on in tunnels at Leith Hill must be prioritised above all else and I am urging the authorities to exercise restraint in the handling of this eviction so that we do not have a repeat of the accusations of violence seen at Balcombe in 2013.

“The people at these protection camps are defenders of the earth and they deserve medals.  We simply must keep oil in the ground, no amount of pragmatism about our reliance on fossil fuels will save us from the impact of climate change when rising global temperatures hit a 2 degree increase.

“That is the reality. We need to be investing in substitutes for oil and oil products now, not sometime in the future.”

New photo from the site

Eviction now been going on for 10 hours

Aerial photo of the site from this morning

BBC Surrey video from the site

This is the fort & tunnels built by protesters at #LeithHill oil drilling site. Bailiffs have been trying to evict them since this morning pic.twitter.com/e1kh45eJyt

“Fencing is part of permitted development”

Surrey County Council says the fencing installed by Europa at the site is part of plans for groundwater monitoring boreholes. This is classed as permitted development which does not need planning permission. The council says it will be attending the site only to check whether the fencing is in line with the plans. 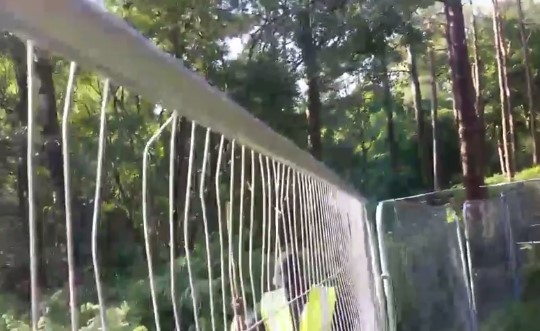 Rescue staff at the camp

A spokesperson for SGI said:

“Specialist Group International’s role is to safely and respectfully remove the protesters. The safety of the people is our number one priority at all times.”

Surrey Mirror reporting that no Surrey County Council staff are on their way to the camp. A spokesperson is quoted as saying the eviction does not concern the council’s role as planning authority.

DrillOrDrop readers points out that bailiffs are using the Countryside and Rights of Way Act (CROW) to move people off the land. The brown-coloured land is CROW land, over which people are free to roam.

“I have been told that SCC planning officers are on the way to camp with an enforcement team to make it clear that erection of the fences is illegal and has no planning permission, but they weren’t there when i left at about 10.30am.

“Theoretically, they could be made to take the whole lot down, but the police don’t seem to be very interested in the law and stated to my face ‘The Bailiffs are taking the lead here, we are here to support them’.”

“Not seen likes of tunnels for many years”

The Surrey Mirror quotes Peter  Faulding, the CEO of Specialist Group International, says that he has not seen the likes of the tunnels built at Leith Hill “for many years”

An eyewitness, Jack Dark, reported that bailiffs were stopping any access to the woods, regardless of boundaries of the exploration site or the injunction area.

The eyewitnesses said the only paperwork being shown by bailiffs was a letter to unknown persons requiring them to leave and a map indicating an area, described as larger than the well site. When asked what powers were being used, the bailiffs said “common law”, the eyewitness said. 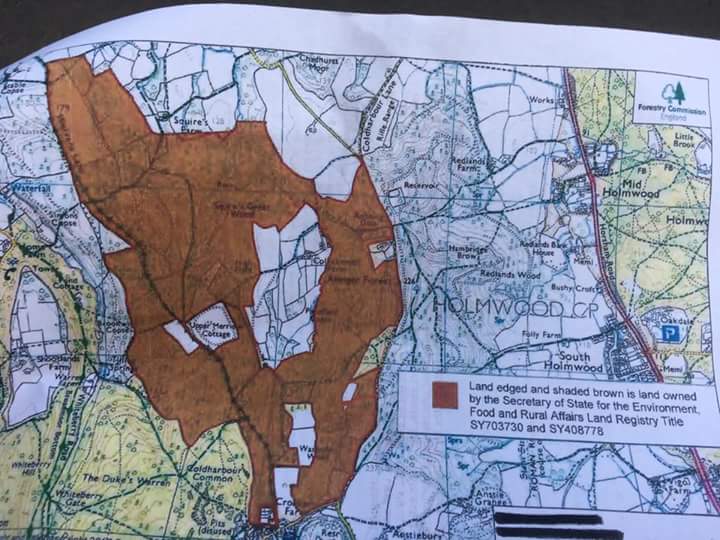 Jack Dark added that the police were not intervening but reported that officers said  anyone attempting to get closer would be arrested for a breach of the peace.

“Protesters’ lives are at risk”

Statement from Dorking-based world specialist tunnel rescue and forensics company,  Specialist Group International, which is at the site:

“A fifteen-person rescue team from Specialist Group International are currently onsite to ensure the safe removal of environmental protesters from tree houses, a large manmade fortress and a complex network of tunnels.

“Peter Faulding is leading his rescue team to ensure that people are safely and respectfully removed without injury.

“The tunnels are very dangerous and the protesters lives are at risk. Life support air is being supplied to those protesters deep inside tunnels. At this stage, we do not know how many protesters are underground.

“The safety and welfare of the protesters are the number one priority.

“Peter Faulding has led all the major protester removal operations since the Newbury Bypass in 1995 and personally removed “Swampy” from the A30 Honiton Bypass in 1996. Peter has not seen tunnel systems like this for many years.

“The team will carefully search all the tunnels and dismantle the fortress piece by piece to prevent injury.”

“Surrey Police officers are in attendance while a security firm, Specialist Group International working for the leaseholders of the land and appointed bailiffs execute a High Court eviction order to remove people occupying an area of land.

“This is a civil matter where the leaseholders and bailiffs [took the lead in the operation]. Police are in the vicinity to prevent a breach of the peace or criminal offences.

“Surrey Police recognises the rights of people to assemble and protest in a public place and will always seek to facilitate peaceful protest while balancing the rights of those protesting with the rights of others.”

BBC Surrey reporting an impasse between protectors locked-on and bailiffs. The station quotes Europa’s chief executive, Hugh MacKay, that four people had been evicted but others were underground locked-on. “Our priority is to make the tunnels safe”, he said.

Mr MacKay said the protectors were “aware of the injunction order”.

Jenny, a protector at the camp, told DrillOrDrop that a number of people were in tunnels under the site and were locked-on. She said there may also be people in tree houses.

She said Heras-style fencing had been installed around the site. Protectors who were not locked-on or in tunnels or tree houses had been removed, she said. Some people were dragged but no protectors had been physically injured.

Jenny confirmed that protectors had been removed from a section of the camp outside the area covered by the injunction.

She said protectors, legal observers and local people were watching from the opposite side of Coldharbour Lane. No legal observers or photographers had been allowed into the camp area.

Jenny said three Police Liaison Officers were at the site, along with about six tactical support unit officers.

She added that the eviction began at 4.55am and confirmed that about 50 bailiffs were taking part in the operation.

Reports of lock-ons at the site and that staff from Surrey County Council and police officers are heading towards the camp.

Livestream from the eviction site

Reports that people were being removed from outside the court injunction area. Reports say there is no police presence but possibly up to 50 bailiffs

Eyewitnesses report the eviction began at protection camp established at the site earmarked for Europa’s oil exploration well near Leith Hill in Surrey.