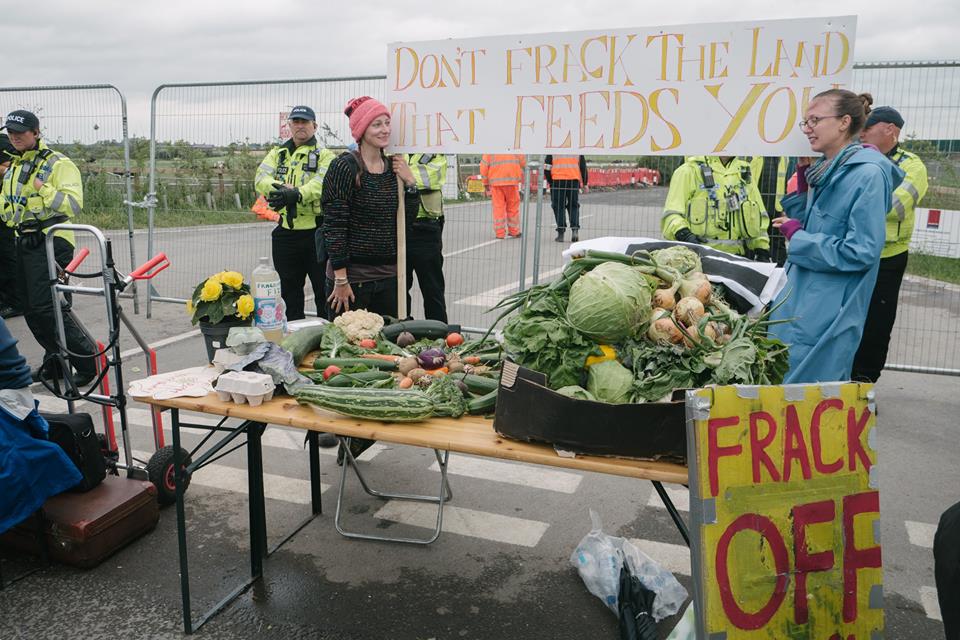 Campaigners from across the UK gathered outside Cuadrilla’s shale gas site near Blackpool for a demonstration today in support of food growing and against fracking.

The rally, with music, dancing, food and speeches, closed the Preston New Road site for most of the day.

Fracking opponents came from as far as away as Torquay and Somerset. Many were organised for a long day at the roadside, with picnic chairs, sandwiches, suncream and umbrellas.

The event was co-ordinated by Reclaim the Power, a national group behind this month’s Rolling Resistance, which has seen almost daily lock-on protests at the site.

A police officer on duty at the site said:

“If you get everyone out like this every day we would not stand a chance.”

Alan Schofield, a Lancashire market gardener and chair of the Organic Growers Alliance told the crowd:

“The most important thing is that those gates are shut.”

“We are the people, together we are strong.”

“We’re not fighting something that should be allowed. We’re here protecting mother earth.

“We’re protecting by educating and informing people and there is a wonderful thing about knowledge that once you’ve learned something you cannot unlearn it, you cannot un-know it. You, you can ignore it but ignore it at your peril”.

Another speaker, Fi Radford, of Grandparents for a Safe Earth, said:

“I will fight this until my last breath”.

The atmosphere at the site was notably more relaxed than on Thursday (20 July 2017), when 10 people were arrested.

Today one carriageway of Preston New Road remained closed during the rally and a contraflow operated. . There were reports of at least one arrest at the start of the day. This post will be updated with information from Lancashire Police.

Reporting for this post was made possible by individual donations to DrillOrDrop. You can donate by clicking here