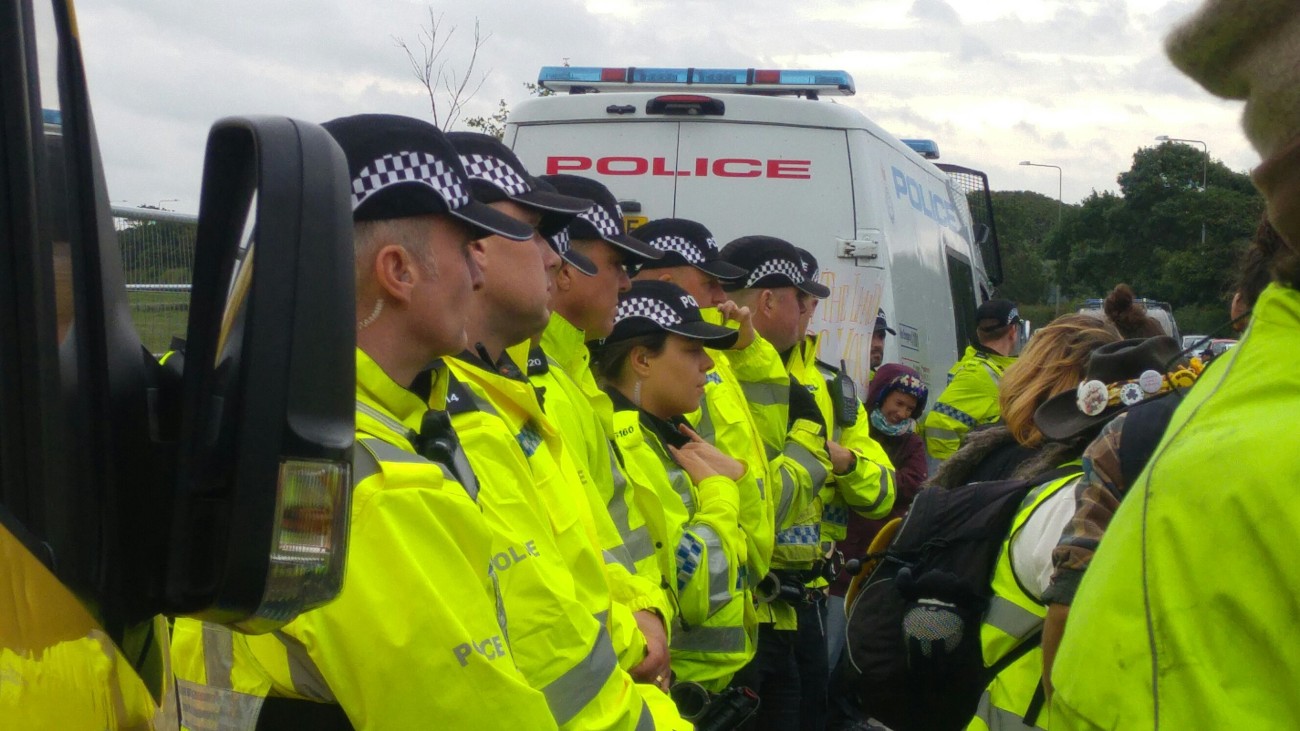 July saw the largest number of arrests in a month so far at protests outside Cuadrilla’s shale gas site near Blackpool, according to figures released by Lancashire Police.

There were a total of 96 arrests outside the Preston New Road site last month, more than double the number in the June.

July’s figure represents 35% of the total number of arrests since the protests began in January 2017.

July saw the so-called month of Rolling Resistance, coordinated by the national campaign group, Reclaim the Power. Also in this month, officers from across the UK joined the Lancashire force to police the protests.

At the time of writing, Lancashire Police have not released July’s figures for charges. So, it is not possible to tell how many of the arrests will result in charges. Figures for previous months show almost all arrests have resulted in charges. The Crown Prosecution Service decides whether the charges will go to court. 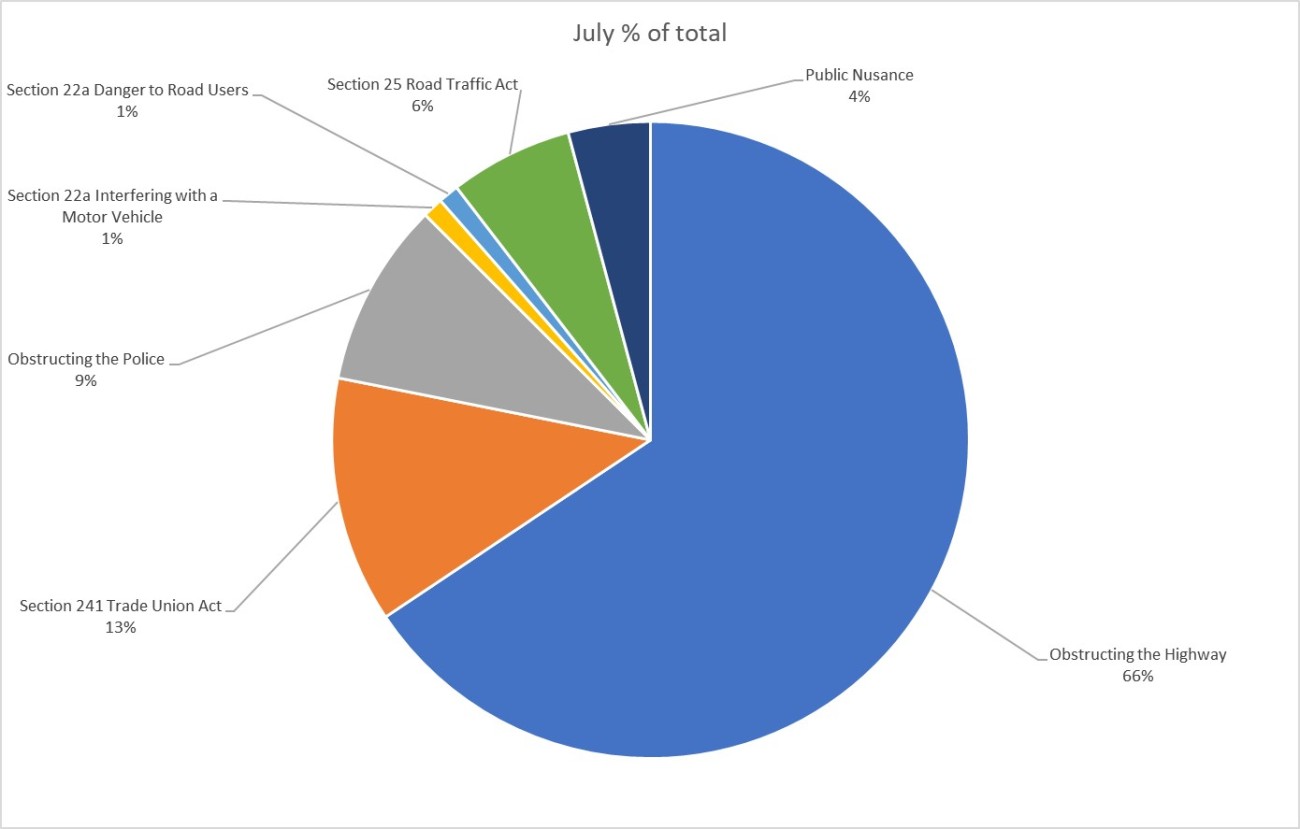 The largest number of arrests in July was again for allegedly obstructing the highway (63 arrests or 66% of the July 2017 total). This continues a trend seen in the arrest figures since April 2017. This reason for arrest now represents 50% of the total recorded since January 2017.

The next highest reason for arrest in July 2017 was under Section 241 of the Trades Union and Labour Relations (Consolidation) Act (12 arrests or 13% of the total).

Under this legislation, introduced to outlaw secondary picketing, a person commits an offence by compelling another person to abstain from doing something they have a legal right to do. This could be by: watching a place where business is carried out; using violence or intimidation; following a person; or hiding tools, clothes or property. 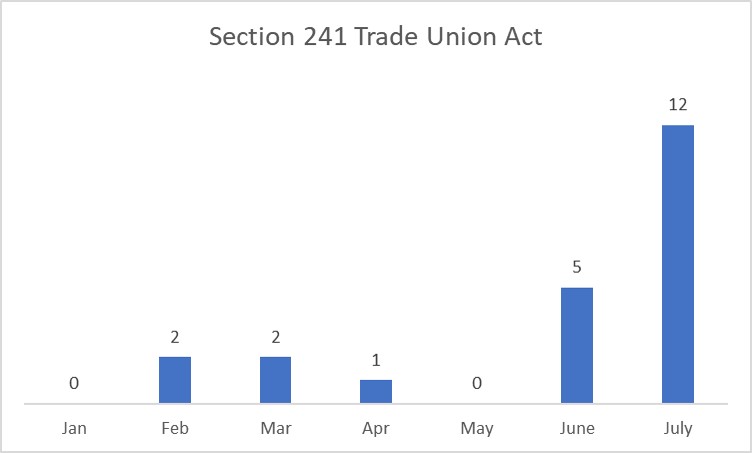 July saw the highest monthly figure for arrests under the Trades Union Act so far since the protests began. But arrests under this legislation represent only 8% of the total at Preston New Road since January 2017.

In July, there were also four arrests for allegedly creating a public nuisance. This is the first time this reason for arrest has been listed at the Preston New Road protests.

There were six arrests under section 25 of Road Traffic Act. This deals with tampering with motor vehicles: either climbing onto a vehicle or tampering with brakes or other mechanisms.

No arrests under Public Order Act

In July, there were no arrests under the Public Order Act.

There have been no arrests under Section 4 of the Public Order Act, which deals with threatening, abusive or insulting words or behaviour, since February 2017 (1% of total arrests since January 2017).

Section 5, which deals with harassment, alarm or distress, has seen no arrests since May (3% of total arrests since January 2017).

There have been no arrests under Section 14 of the Public Order Act, which deals with breaches of conditions on public assembly, since March (12% of total arrests since January 2017). 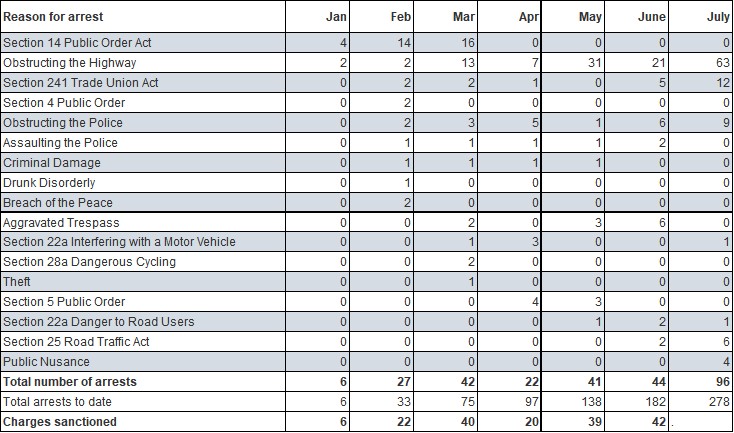 Please let us know by clicking here if you would like this data in Excel format.